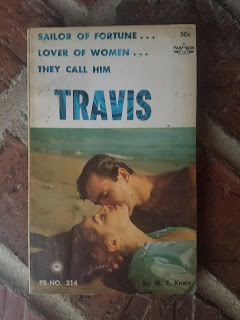 I often go on little jaunts down blind book-alleys. I'll buy a book by a new (to me) author and think that it looks mighty fine. But in my book hunting I'll see the other books in the author's library and in a blind-book-buying-rage I'll end up with those too. To top if it by the time they show up in my mailbox, I'm distracted by other lovely books or nose deep in a novel already. That's how piles of books end up by my wayside. Haunting The Thrilling Detective Website, I stumbled onto Mike Travis and then a little more snooping on Mysteryfile here and blam-o I had four novels by M.E. Knerr coming to me from across the globe. AND to address the Elephant in the room, it's not possible for "Travis" to be a Travis McGee knock-off. "The Deep-Blue Goodbye" came out in 1964 a couple years after Knerr's Travis. 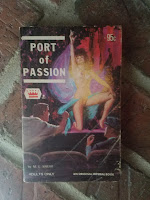 the internet) marked as the one and only Men's Adventure/Sleaze/Private Eye Mike Travis mystery. Well with my manic book buying I discovered Mike Travis, that solider of fortune/boat bum appeared in at least one other book "Port of Passion." Well, down the rabbit hole I went. M.E. Knerr (sometimes Michel E. Knerr) didn't write a lot of books, but a lot of them were were for pretty low-rent publishers with short print runs so they're scarce and a little pricey. Not that I imagine people (other then me) are scrambling to buy these old paperbacks. Knerr published two novels in 1961 one with Pike Books "Brazen Broad" and "Naked Nymph," with Epic Books, the later being a Mike Travis adventure according on-line images of the back cover. It's a 50/50 on if "Brazen Broad" is a Travis tale. So, if you have anymore information let me know! Then in 1965 with Imperial Books Travis returned in "Port of Passion," something I didn't know until I cracked the book open to flip through it and my quest got started. Its seems Travis floated around publishers or maybe it was the same publisher working under different names/imprints. Knerr wrote some other books mostly about boats, space-sex, murder, dames and adventure. Also one about Sasquatch. 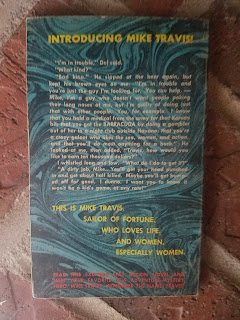 So, now that you and me know all that, how's the book? Was it worth all that info?  Well, yes and no. I personally had a great time with "Travis," but my tasters burned out years ago for this kind of thing. It's the literary equivalent of  Ray Dennis Steckler or Al Adamson B-movie, flashes of greatness bogged in the mire of working too fast and needing cash. M.E. Knerr certainly could write there's great lines of tough guy dialog that ranks up there with the best of the Gold Medal writers. Overall it doesn't rank with say a Crest, Lion or Gold Medal book, but it's certainly as good as a half of a Ace Double. The plot makes reasonable "paperback sense" i.e. it hangs together for reading and not for deep thought. Basically Travis is a tough guy for hire who gets hired by a buddy to find his missing drug-addict son and smash all the dope-selling in L.A. (HA!) To do this the rich and powerful guy pulls strings and sets up Travis with a P.I. ticket and a gun permit. Travis isn't a detective and it's fairly obvious that he's making it all up as he goes. I got vibes echoing one of my favorite 50's private eye series the Japan-set Burns Bannion books by Earl Norman. Like Burns, Travis is in over his head, sure he's a bad ass who can get pistol-whipped and bed the ladies with the best of them but tackling an actual mystery, eh, that's a bit much. Instead he makes fast friends with a local cop and then just goes and whomps on people and breaks into places until it's obvious who the villain is.

It's a whoot. It's a super-slim book that moves and moves and moves and then is over. It will not change your life but it's has just enough of the good stuff for me to enjoy the hell out of it. It got me to get more familiar with the Pike Books line and order more novels, which seems to happen most every time I finish a book. Knerr was a good writer and I'm anxious to dip into the rest of his library. It'll be interesting to know if Travis keeps up a the private eying or if it was a passing fancy and he continues his soldier of fortune-business. I'd like to know more about Knerr and his work, so if you got any more information drop me a line.

Posted by bloodyspicybooks at 9:15 AM No comments:

Carousel Books was a short-lived publisher of which I heard it was imprint of a porn publisher, details are few and far between in my internet detecting. Please fill me in if you know any more.  The books a generally the same size of a mass market paperback but feel weird in the hand. The binding is sharper. It's like the first time you hold a Pan paperback or New English Library vs. a Gold Medal or a Pyramid Paperback. I don't know what that has to do with anything but I figured I should note it for the future generations to log in the history of the cosmos.

Anywho, Vince Robinson wrote a few books for Carousel and sometimes he was Mike Newton, sometimes it seems he wasn't. Newton is a prolific author of books just in the Men's Adventure realm he wrote "The Executioner," "MIA Hunter," and "VICAP" to name a few. That leaves out tons of Westerns, true crime and other books. Check out his website to see everything he wrote. The short lived "Intersect File" series was a Newton/Carousel joint and I got an example of that series coming after burning through "Terror at Boulder Dam." Good pulp fun awaits me, I'm sure. 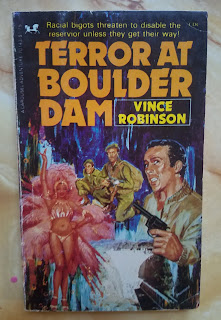 "Terror at Boulder Dam" starts off going 90 miles an hour and never lets up. I haven't read a a novel that moves this fast in a long while. Brad Kendall a Las Vegas private eye who name checks Dan Tana and Mike Hammer is beyond broke which is a warm safety blanket of a welcome for a P.I. fan when a beautiful show-girl saunters into his office with a missing brother. Brad is on the case and immediately gets into hot water and a warm bed with the showgirl. The trouble is a racist rich nut-job out to pull explosive high-jinks on the Boulder Dam. Along the Brad is an accessory to nasty brutal murder, gets into bar fights, accidentally joins The Sons of Paul Revere; the racist-nutjobs private army and since he's not a racist-ass-hat gets his private's tortured with electricity. This builds into a action-packed finale with Armalite's, .45's, Uzi's, flame-throwers, and a helicopter assault on a yacht. My kind of P.I.

Seriously this book is just plain simple fun, Newton seems to  slyly wink at the genre conventions and handles action with aplomb. I goes down like it was written as fast as it reads and there's obviously some loose-logic in there, but it's part of the charm.  It's a total B-movie of a book, check your brain at the cover and roll with the punches. The paperback is hard to come-by like a lot of the Carousel books, but Newton has put it up as an E-Book that's cheap and easy to obtain. I did and then stumbled onto the actual book, at a highway truck-stops used book shelves in one of the weird twists of fate.
Posted by bloodyspicybooks at 8:25 AM No comments: 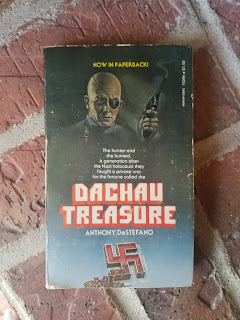 Here's a short and to the point review (as short and to the point as long-winded me can provide) of "Dachau Treasure" by Anthony DeStefano who wrote the short-lived Mondo martial arts series. I have #3 in that series but haven't read it so this is my first taste of DeStefano's work a stand-alone Manor paperback riddled with so many typos I actually noticed and that's saying something cause I usually don't care.

"Dachau Treasure" opens up with Stosh Jacobs cleaning his .44 Magnum. BOOM. It got me there, probably. Stosh is the eye-patched bald guy on the cover. He got his eye-patch in the Dachau concentration camp as a boy. Now he hunts down and kills Nazi for they bounty on them. He's aided by his super 70's-brand "intellectual college boy" Eric, who acts like his nagging wife about how he should retire his life of badass Nazi-hunting, but is a good decoder and helper or something. Also along for the ride is the much more fun Alexoya a general thief and crafty/fun character. Anyway Stosh really wants the Nazi-jerkoff who took his eye and he gets a line on him and uncovers a bigger plot and starts hunting the stolen "treasure" of the Jewish people from Dachau to return it to the rightful people.

The first half of the book is rock solid Men's adventure with plus shag carpeting Stosh and his silenced-Webley revolver and his hot-rod Jaguar scream around beating and shooting information of of Nazi dicks. With brief intervals of  Eric whining about how killing Nazi's isn't the right thing to do. Stosh goes down to Mexico with Alexoya, tries some pot with some sweet ladies and with his buddy and some knock-off Smith and Wesson revolvers kills the man who took his eye. That part was a little rushed and it's a sign of what's to come. Seems like Stosh would have made a bigger deal about killing the dude he's been hunting for years, but hey, okay, I'm rolling along with the book enough. 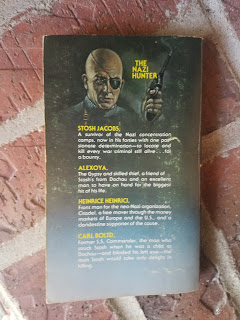 Then the narrative slides into something else. There's a Nazi conspiracy. Stosh begins to wonder if he doesn't enjoy getting high and laid more then Nazi killing and it moves into the 70's conspiracy thriller novel: with Eric at the front. Eric is followed by mysterious Nazi agents through New York, runs one of them over with his car, hides out with his girlfriend and they have a couple good-long talks about how he shouldn't pick up one of Stosh's gun and protect himself if the Nazi's find him. They also smoke a lot of pot.  Stosh swoops in at the end to quickly save the day as DeStefano was rapidly reaching his minimum word count and the patented "Men's Adventure Rapid Ending" is in place.

I probably liked the book more then it sounds like. The first part was super-solid, nice fast well written action with heavy dollops of 70's grooviness and Stosh is a colorful character compared to the usual "Square-jawed hero" of these paperbacks. The book looses it's way but then wraps up in a pretty good action sequence. Its the Jekyll and Hyde of 70's Nazi-Hunting Men's Adevnture Paperbacks.
Posted by bloodyspicybooks at 8:13 AM No comments: