I'm pretty easy to entertain. I can usually turn off my "writers brain" and just go along for the ride when a movie is simply made to be enjoyed. If a movie is supposed to be something special I tend to be a lot harder on it. "The Honest Thief" was made to be enjoyed, but why the hell was it constantly making me think about how half-ass it is? It seems to go out of it's way to be a sloppy mess. I love Liam Neeson. Even before his "Taken" inspired second act. "Darkman," "Next of Kin," Michael Collins," and then I do really love "Taken," though the cottage industry of "Liam Neeson Punches People" movies are a decidedly mixed bag. Movies like "The A-Team," "The Grey," and "Run All Night" deliver the goods, while others seem like pale imitations of themselves on a loop.

I guess I'm harder on crime movies then about any other genre, its a genre I truly love and when they are good can be a tightwire escapade of tension and thrills or serious ruminations on the nature of crime and law. "The Honest Thief" wants to be be a thrill ride with a love story at the center. Unfortunately it rarely thrills and gave us no time to develop any feelings toward our happy couple Liam Neeson and Kate Walsh. A tired "meet-cute," then a time jump do not make a solid love story. The love is supposed to be strong enough for bank robber Liam to give back the money and go to prison for her. Maybe if the two had chemistry or any substantial screen time together. Yeesh.

One of the big issues is that the script seemed to be written for someone half Liam's age. I spent a good chunk of the runtime trying to figure out who old the characters were supposed to be. Liam's character Dolan was supposed to be a war veteran, purposely left vague who came home and ended up robbing bank because a bank foreclosed on his father's farm. He continued to rob banks just for the thrill, never spending the money and now feel guilty about it. Here's were the movie wants to have its cake and eat it too. Liam could easily burn the cash and never get caught and live his life, the FBI are not onto him. Hell, it takes them a while for them to even believe that he's (snicker) "The In-and-Out Bandit." Of course he doesn't tell the love of his life he's a bank robber, cause women love giant surprises like that. Instead he goes off and gets a hotel to wait for the feds. Which turns into a limp "on the run from dirty cops" story. They want Dolan to be a noble Robin Hood type instead of a cold thief like Richard Stark's Parker, I guess so he can fall in love and the audience won't feel in conflict in rooting for a seemingly "bad guy" but its such a limitation to the character. If the Dolan character who was a hardened crook known to the FBI but never caught and decides to retire only to get caught up in the same dirty cop story you might have something compelling. A little moral ambiguity goes a long way.

Nobody in this movie has enough to do, especially Kate Walsh; who stands around, sometimes mad then sometimes is cool with Liam being a bank robber and mostly just dresses like a 20-year-old in a number of jean skirts. My wife is a costume designer and I never took much notice of how much a characters clothes and draw you in or pull you out of a film until watching movies with her. She simply couldn't get over the number of short jean skirts 50 plus Kate Walsh wears and soon I couldn't un-see them either. As much as the female lead is lacking; it completely wastes awesome actors like Robert Patrick and Jeffery Donovan. Jai Courtney is supposed to be the bad guy but the writing is so flat that he never comes off as a real threat to Liam, maybe Courtney and Donovan or Patrick should have switched parts. Anthony Ramos playing the conflicted FBI gives it his best shot at making a compelling character and at least comes off as noble despite his faults. He really is the strongest secondary character, but like everyone really doesn't have a big moment or scene with enough weight to fully land. It plugs along, there's an explosion and then it just sort of ends. Oh, there's a nice dog in it. I liked the dog.

This movie simmered in my brain for a few days before I latched onto the one thing that I think really cheesed me off. In 2014 Liam starred in "A Walk Among the Tombstone" an adaptation of Lawrence Blocks monumental Matthew Scudder series of private eye mysteries. And it's a really good movie, not absolutely perfect but nice and close. Liam is perfect, his Scudder is wounded, trying, failing and its encased in a nice mystery with plenty of thrills. Writer/director Scott Frank is one of those guys who would have been Don Siegel league in the 70's, just churning out great material year after year. It could have been the first in series of Scudder movies. But the movie bombed. And what annoys me is that this could have been the third or fourth Scudder movie by this point, each nestling in to Liam's low-budget "Taken"-ish place on his filmography, between the "serious" movies he does. I really miss an era of smart-escapist fair. Plus as Liam ages, its really getting harder to buy him as an action hero. A tough detective, on the other hand absolutely. It really grinds my gears.

Plus it only makes me think that Liam Neeson might have been a really strong Parker. Liam Neeson starring in "Slayground" or "Butcher's Moon." Yeah that could have been pretty rad.

Posted by bloodyspicybooks at 10:28 AM No comments: 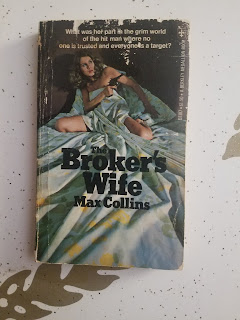 Sorry for the long delay in posts. I've been doing more writing than reading here lately. For those not it in the know, I'm a very low-budget (multiple award-winning) filmmaker. I have to throw the award thing in because otherwise the only way anyone knows is to come into my house and see them collecting dust on the shelf. So, I've been writing short films, two features, tinkering on my second novel, rewriting and polishing material. Since my team and I are all fully vaccinated and can finally (somewhat) get out of the house and make shit. I only tell you all this as a some-what lame excuse for the lack of reviews.

Anyway, Max Allan Collins has been a staple of my reading nearly since the beginning, at least my "adult reading." I'd imagine if he wrote children's novels I might have gravitated toward those too. It was his movie tie-ins that I first picked up (see the movie thing ties in here too) I'd always ben a movie freak and since the movies that they showed at school rarely showed gun-fights, fisticuffs or had curse words I turned to the tie-in world to carry my movies with me. I was a real weird middle-school kid with a copy of "In the Line of Fire" in my book-bag. These days that might have got me in trouble, who knows. Max's tie-ins for "U.S. Marshals," "The Mummy" and the like made me know his name.

But it was his own novels that made him a favorite of mine.

For some reason though his Quarry novels had eluded me, so I have missed out on what is really might be his crown jewel. Right before I started the blog I fixed this by buying most of the novels and tearing through "The Broker." I loved the book and became an instant Quarry fan. I was already a Nolan, Mallory, Ms. Tree, and Nate Heller fan mind you. "The Broker's Wife" is the 2nd Quarry novel only if you go by publication date. The order of the books zig-zags around and the titles change for different editions. It's a bit of a maze to master so I just decided to play it like I was reading them as they came out.

Quarry is a wise-ass 'Nam vet who returned home to find his wife cheating on him, after a little creativity with a car-jack the man who was screwing his wife is dead, Quarry gets away with and lands in the sights of The Broker. The Broker has a network of killers-for-hire and offers Quarry a job. Since killing is about the only thing he knows he accepts. Things go sideways in the first novel and the second finds him hiding out in a cabin waiting for some hitmen to come and try and take him out. They do and the narrative is off and running. Along the way Quarry tackles killers, dirty lawyers, the beautiful widow of The Broker and even uncovers an old family secret. Max has a really nice clean "meat and potatoes" writing style, uncluttered and unpretentious. He (at least with these books) wants to tell a clear, exciting story and he absolutely delivers. Quarry's voice is a affable one for a stone-killer, he's a guy you like to hear stories from but might not want to actually know. People who know Quarry usually end up dead it seems.

I'll be forever grateful for Hard Case Crime for giving Max the opportunity to continue the series and pile up books on my shelves. Max's books are the most exciting novels coming out of  HCC anymore.  Man, I didn't even mention his collaborations with Mickey Spillane which are just uniformly excellent. Plus I just picked up "Skim Deep" the first Nolan book in 33 years, which I'll be covering here soon I'm sure. Then I'm also going to have to pick up his new series about 60's spy John Sand, that hits all the right buttons for me. Then there's his Jack and Maggie Starr series that I need more off, plus his stand-alone "Midnight Haul." Wait, then I need to get the rest of his Elliot Ness books. Whoa. Can you tell I'm a fan?

Posted by bloodyspicybooks at 9:37 AM 2 comments: