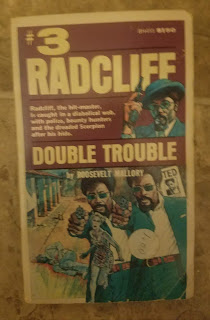 Paperback racks had a bit of a swell for the influx of "Blaxploitation" cinema in the early 70's with the likes of "Shaft," "Coffy," and "Superfly."  The good folks at Holloway House seemed to want to get in on Pinnacles "Executioner" action and brought out a couple of contenders. One being Joseph Nazel's "Iceman," a high-class pimp vigilante and Roosevelt Mallory's "Radcliff," a stone cold mafia hit-man who shouldn't be fucked with. Roosevelt Mallory should be counted along with the great work of Donald Goines and "Iceberg" Slim in the Holloway House line, or any publisher for that matter.

Reading an Iceman is a fun way to spend an afternoon, but reading a Radcliff is closer to looking down the barrel of a sawed-off double barrel, tension ratchets up and Radcliff is a whole lot of damned trouble and it don't seem to matter to him. Radcliff lives in the same type world that Richard (Donald Westlake) Stark's Parker lives a noir wasteland of thugs, dirty cops, evil men and women. "Double Trouble" is the third book in the series it's suitably gritty, a wild blast of funky 70s Men's Adventure. Radcliff is a badass assassin on the run after being set-up by the mob for killing several cops. It was a fast read that really hits all the right buttons. If you like the idea of slightly seat-of-the-pants writing writing for fast money, quick moving, very violent action and the feeling of being surrounded by shag carpet and wood paneling while reading it, then it's a book for you. It wasn't a perfect book it suffered a common problem with a lot of these books: too much build up and a rushed resolution plus some hyped stuff on the cover that didn't amount to much but it was entertaining enough to be forgiven, plus a little too much focus on the other characters when all I really wanted was Radcliff using his dual .38's to gets some payback. I got one more Radcliff and it's a shame that they are so hard to find because this was a fun hard hitting book. 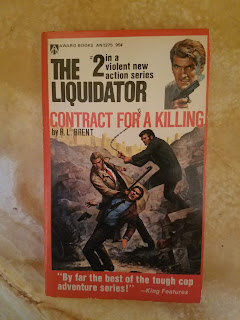 Larry Powell was R.L. Brent for this medium length series called "The Liquidator," I picked up the
whole series almost accidentally before reading a single word of it, then to top it off I started with the second book cause I'm a weirdo. The good thing about most serialized 70's fiction is that they are made for you to have missed a book or two, so they explain everything you need to know in most of the volumes. "Contract for a Killing," told me Jake Brand was an honest cop who's brother is killed and he takes it personally (of course) and decides to take on the mob single-highhandedly. The Penetrator, The Executioner, The Liquidator, Lone Wolf,  Death Merchant and the like might have got the job done quicker if they had just teamed up to face the mob, but what do I know?

Brand is out of jail and looking for the hitman-dude who iced his brother and gets mixed up with the paid killers next hit, a woman who Brand wants to warn and basically use as bait to snag his killer. Brand spends the time on the run, gathering guns and whooping information out of people. Also sexing ladies. This is all standard stuff but Powell writes well and it unfolds at a nice pace, never bogging down with any filler-bullshit. Brand is a likeable enough version of the mob-killer archetype, the ex-cop/ex-con thing is a nice touch cause he's truly alone no cops or crooks would trust him. It builds to a nice ending that's a bit of a cop-out but it's that way to keep the series going. There's just enough of a ending to the volume for it to feel like a full book. Powell is now on my radar, I have a couple of Nick Carter: Killmasters he wrote and I'll have to move them up to the To-Be-Read pile. This is solid B-level stuff; it's not going to change your life but it's certainly better written then some.

Finally Shannon #1: The Undertaker is the TECHNICALLY the worst book of the three but I probably had the best time reading it. This is a utterly ridiculous book in the best ways. I think it belongs to the the unsung-genre of Men's Adventure Fiction: The Inaction Adventure book, right there with Hardy by Martin Meyers and Decoy by Jim Dean. Patrick Shannon our "hero" doesn't do much action stuff. In fact he mostly drinks, boinks ladies and fucks up until he defeats the baddies with I dunno, luck? 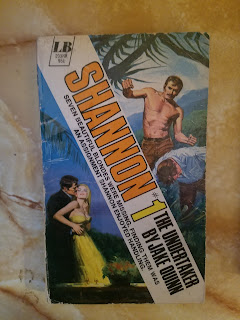 Jake Quinn was J.C. Conaway who wrote a bit of this type of stuff two female P.I. series that seem to be the same character roving around under different names, i.e. Janna Blake and Nookie, er, um. Also horror books, gothics, stand alones and this three book series, some under names like Jim Conaway and Ross Webb. I'll tell you I had enough fun with it that I bought a large sample of his work half way through. Why you ask? Because I'm certifiable. So, Shannon works for a top-secret spy agency, has a butler named Joe-Dad who's racial insensitive to two demographics, a penthouse, a Porsche, a untraceable Beretta and a stocked bar. Someone is kidnapping beautiful blondes of the street, starlets, figure skaters, models, that type of blonde. Shannon looses a girlfriend, snoops around, gets an old blind woman killed, looses more women, adopts a cat and plays with a god-damned Seal over the course of this novel. Also has sex with EVERY female character, including a lesbian because its the 70's and a pulp novel. Eventually (like the last 20 pages or so) he fucks up enough to get kidnapped and shipped in a coffin to a bad-guy island in a coffin and almost inadvertently saves the day tangling against a deformed villain/henchman combo and literally saving his penis. Also then has some more sex. All in all this is the stupidity, violence and twisted fun I want in a funky 70's paperback. Conaway seemed like he was "in" on the joke to me, which makes it worthwhile as pure entertainment.

Posted by bloodyspicybooks at 9:15 AM 2 comments: 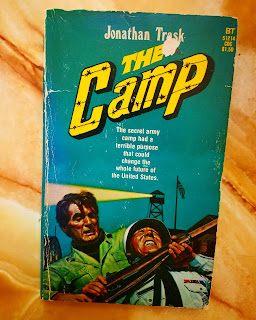 One of my first reviews on here was "The Sundance Murders" by stalwart writer of ass-kickers Peter McCurtin. The book introduced Berger a hard-boiled reporter like they don't make anymore. A drunken cut-down Walther P-38 muckraker who travels to the desert and kicks up shit and ass. It was a novel after my own heart. I noted that it very much seemed like a first in a series or an installment in a series but sadly Peter McCurtin was a busy writer and editor at the time churning out his own work, ghost-written work, and editing great series like John (Ben Haas) Benteen's Fargo and everything in-between. So, I guess poor Berger got lost in the shuffle.

Jonathan Trask was Peter McCurtin, but he was mostly Len Levinson for this book. Len Levinson is a fantastic author with paperback-cred longer then your arm, working on series like "The Sharpshooter," "Ryker," "Joe Blaze" and creating  super-spy "Butler" and kick-ass W.W.II tales of "The Sargent" and "The Rat Bastards." Not to mention westerns and stand-alones of all genres. He like McCurtin is an author you can trust to give you a good time. They both seem to understand what their audience wants, their books are lean and fit with no filler and colorful characters. They do have completely different styles and voice, its fairly easy to point out either of their work even if their name isn't on the cover.

So, here's the rub. I think "The Camp" started out as a Berger novel. McCurtin wrote the first chapter, it's really clear that it's his work, it's got a lot of his ticks, old movies on TV, being more morose, heavy drinking etc. etc. The hero is now named Phil Gordon but it it starts roughly the same way with out narrator talking to us about himself. Gordon/Berger explains that he's a roving reporter who packs a Walther and ain't afraid to use it, that they work for a tabloid paper etc. etc. It's nearly word-for-word for a paragraph. I got totally deja-vu. Was this my long lost 2nd Berger novel? Well, yeah I sorta of think it is. It's a Frankenstein book with the two authors narrative styles being quickly bolted together, because after the McCurtin chapter Levinson's behind the wheel and it's his free-wheeling action/adventure with wiseacre humor peppered in. Gordon stops being McCurtin's character and becomes the slightly unhinged, slightly necrotic Levinson character. He's a happening guy with a sweet Porsche, he's good at his job, ex-army and always on the look out for trouble and women. The kind of guy you want to read about.

The plot is real nice I can see why it was saved from either being unfinished or forgotten by McCurtin and handed to Levinson who was producing some of the best work in the Belmont-Tower line. Basically Gordon goes to hang out with his old Native-American buddy in the Maine woods and finds out that there's a mysterious army installation who may or may not be responsible for the disappearance of his nephews. They look into and find the remains of tortured hippies in the camp and then nearly get killed. Gordon's now all in, he goes back home, makes some friends in high places and boinks with a attractive women within a few hours of meeting her and sets up his mission to get the story and hopefully find his friends nephews. It's got some heavy 70's political thriller vibes in the middle, a little "Parallax View," and "All The President's Men" mixed with man-on-a-mission pulp. Gordon gets help from a friendly general and sneaks into the ultra-right-wing-death-to-all-that-disagrees-with-us-murder-camp and gets a guided tour by a randomly gay army officer. Here's the only minor problem I had with the book: Gordon's in the camp for a day, sees what he's going to see  (torture chambers, murdering hippies for sport, etc. etc.) and then raises hell with grenades, rifles and the prisoners of the camp and gets the hell out. Some more time inside the camp with some build up might have been nice but then the result is the same. The ending is total awesome 70's (probably still now) paranoia with a real nice button on the end.

All in all its a fine little paperback thriller, full-tilt and lean with enough character and surprises to spend a pleasant few hours with. McCurtin and Levinson are some top-shelf guys at writing this stuff, buy anything with their names or pseudonyms on it.  There's a lot of hack-work in this genre/type of book (mostly on the best-seller list) and I long for the days of sub-200 page roller-coaster rides. Looking around after reading the book I was mildly surprised to see the price on the second hand market. It must have had a short-print run and Belemont books always seem to be pricey anyway. I got mine in a lot of books on ebay chock full of expensive McCurtin creations. It was a good chunk of change until you worked out how much the books cost individually. I guess the moral of the story is to buy books like things at Costco: IN BULK.

Posted by bloodyspicybooks at 8:07 AM No comments: