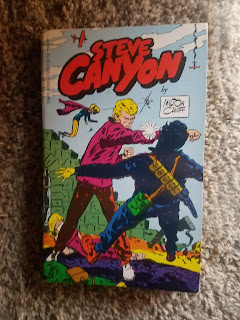 I've said it before but I have a fondness for paperback-sized comic reprints. Sure, they are of fairly poor quality in terms of squashed panels and odd-placing. Tempo books put out a lot of books with reprints of Batman, Flash Gordon, Superman, Popeye, Conan, Beetle Bailey etc. etc. They only put out one Steve Canyon book though which is a shame because this is a lot of fun. I'm a pretty big fan of Caniff's "Terry and the Pirates" but I've only ever read a few issues of Steve Canyon reprints and they were strips where Steve was fightin' in Korea, they were okay but didn't do a lot of me. This paperback reprints (what I imagine) is a more recent (1978) pair of stories. I took to these stories a lot more then the earlier ones.

There's two tales that run together in here. They drop you right into a continuing storyline with Steve searching for his missing wife when he spots her in a newspaper photo and he's off to Langapora to hunt her down. Along with his buddy/journalist Johnny Mink they tangle with a goofy but deadly King, scale palace walls, rescue a different women, lay on a little bit of a con-game, go inside a dragon, and even have a nice car chase. Of course at the end its open to continuation because right after than Steve's in Hong Kong getting kidnapped, tortured, being mistaken for a Russian spy, being saved by ice cream and finally having a bad experience with acupuncture. The second one is the lesser of the two stories with Steve being out of commission most of the time and being dragged around by a pretty Chinese spy who wants to defect to Russia. Steve's a nice hero, funny when he needs to be, action-ordinated when he needs to be with friends (and enemies) across the globe. That being said, I still like Terry and Pat Ryan better. Every now and then I got on a tear of reading a bunch of adventure strips and I always marvel at the quality of the art AND the writing. The writing always seems to take second place to the art when people discuss these old comics but the tales they told were just as engaging as the art. Now if someone would only reprint William Overgard's run on "Steve Roper and Mike Nomad."

I enjoyed the hell out of this book. I think I was a little bit of a "Terry and the Pirates" snob, which is just silly in retrospect since Caniff is just a master of film-noir/high-adventure mash-ups. There's some very problematic caricatures of Asians and other nationalities throughout the book that's indicative to the era. It's something that I can look past, acknowledge as terrible and I understand if others can't. Fair warning. I'd have a newspaper subscription if there was anything this adventurous on the comics page.

Posted by bloodyspicybooks at 11:42 AM No comments: 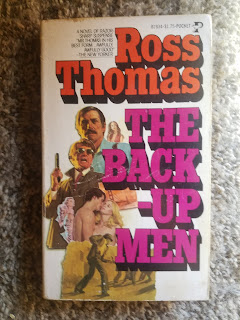 Ross Thomas could really write the hell out of a book. He seemed to do it with ease. The natural banter between characters, the natural banter between himself and the reader all pours out on the page like a aged scotch neat. He's a writer's author. He never quite made it super big but instead carving himself a nice career with cloak and dagger books that were like no other. He started late in life which seems to have been a colorful life and after two weeks in his 40's he had a book down that won an Edgar. Then BANG he had a career. I personally probably gleaned a lot of my views on what a politician is based on the descriptions of the folk who hang out at Mac's Place in D.C. in Thomas's books. As I got older I haven't found that Thomas's opinions of senators, congressmen, government types or bartenders were wrong. There's not really "nice people" in his books, but you don't mind spending time with them, the way it happens sometimes in life too. 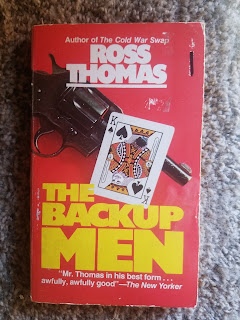 The older I get the more open to re-reading. I first read this during a snowy winter in my 20's. I remember it distinctly as I read a chunk of it in a cold 1963 Ford Fairlane that I had just driven off the road after having a run-in with a patch of ice while waiting for a tow. I guided the car through a barbed wire fence and between two trees. It was a fancy bit of sliding. It was nice company. "The Backup Men" is the third book about "Mac" McCorkle and Michael Padillo, a barman and a deadly (sometimes) ex-spy. Mac's narration probably pretty close to talking Thomas himself, at least that's the way I like to think of it. Together they own the aforementioned Mac's Place formerly in Bonn, Germany but in D.C. in this book. Padillo is around sometimes, sometimes he's off doing the spy-bit. Mac runs the bar and tells us their stories. Open on of their books and skullduggery always ensues. In this one they are roped into being body guards to a new King and his adviser as they cross the U.S. to sign some important papers about the fate of the new King's oil rich country. Along the way they get involved with the personal revenge of Wanda, sister of the dead a-team, fend off professional killers, drink copious amounts of booze, fall into and setup up various traps, meet nice-old society ladies and exchange wise-cracks. It's a book full of old friends even if this is the first time you met them. You read a Thomas not for the plot (though those are always good too) you read them to enjoy a drink and dodge a few bullets in capable hands.

Thomas is on my Mt. Rushmore of favorite authors. He writes with a thick brush of sarcasm and wit but never sacrifices the intrigue and action. He's best when he gets to write about a duo having wild adventures like Mac and Padillo or Artie Wu and Quincy Durant but his "professional go-between" Phillip St. Ives novels (as by Oliver Bleeck) are also uniformly good, if a little slight. St. Ives got a Charlie Bronson movie made out of one of them too. His novel "Briarpatch" was just made into a TV series, staring Rosario Dawson but even now Ross Thomas is vastly underrated and bordering on being a forgotten writer. I keep him next my Donald E. Westlake novels on the shelf, so you know, close to the heart.

Posted by bloodyspicybooks at 9:30 AM 3 comments: