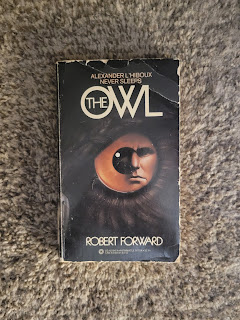 Robert Forward, as in forward momentum I assume because "The Owl" is all about making you run through the pages. Ya'll like action? How about some mystery? Sex? Violence? Yes, of course you do. Why else would you read a blog like this? Anyhow, Bob Forward has a long history writing for animated T.V. shows like He-Man and the Masters of the Universe, Rambo: The Force of Freedom, G.I. Joe: A Real American Hero, even Super Dave. In the haze of writing some of mine and your favorite 80's cartoon's he squeezed out two novels about Alexander L'Hiboux aka "The Owl," a L.A. crimefighter with who doesn't sleep and likes public transport.

Lying somewhere between Norvell Page's The Spider and Mickey Spillane's Mike Hammer, The Owl is "justice for hire," not really a classic P.I. but not a moralistic "Batman-type." He's a guy who wanders the streets as a scourge to the bad guys with a killer reputation and since he doesn't sleep, he's got a lot of time on his hands to be badass. He's an 80's off-the-grind, bulletproof-jacket wearing, Peacemaker-packin' version of Race Williams. You hire him and turn him loose.

The teenage daughter of a guy gets her face blow-torched and dies, the father wants vengeance and for a price, The Owl is on the case. Along the way there's a lot of shooting, chasing, murder, sneaking around, bus rides, shady bars and the slowly unfolding backstory of The Owl. Forward really never lets The Owl take a breath, even after some bullet-holes The Owl is up and back on the case which is a nice twisting and turning tale of smuggling, blackmail and death.

There was even a T.V. movie with Highlander-star Adrian Paul, which I watched after reading the book. Which really didn't capture the feeling. You'd need a full-80's-era motion picture budget and mood to capture the full impact of the book. I couldn't help thinking of the late-80's T.V. adaptation of Mike Grell's Sable while watching, which was full of the big ideas of the AWESOME comic but lacked the dollar signs to fully realize it. But as an aficionado of that era of action shows, it wasn't too hard to sit through, feeling like comfort food for my action-junkie soul. 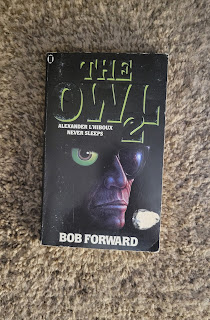 "The Owl" is a nice mixture of the narrative thrust of a Spillane novel with the trappings of some of the 70's Men's Adventure heroes and a much bigger dollop of pulp heroes. As I was reading, I was also reminded of F. Paul Wilson Repairman Jack series, albeit without the supernatural stuff. Forward is a fine writer who write clean so you never get hung up as your gliding through The Owl's violent adventure. It's a shame there's only one more novel in the series "The Scarlet Serenade" which was never published in the U.S. (I have a NEL paperback) until Lee Goldberg's wonderful Brash Books reprinted them both. So, their easy to pick up and enjoy...which I'm sure you will.
Posted by bloodyspicybooks at 12:17 PM No comments: 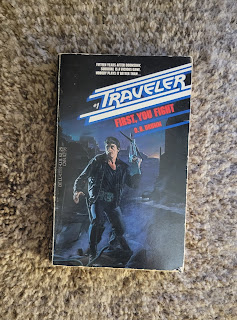 As you all know, dear reader, the 80's Men's Adventure world were all about the end of the world. Least it seems so in hindsight. Blame the cold war. Blame "Mad Max." Blame whatever. Post-Apocalypse paperbacks cluttered the spinner racks, so much so that I've avoided them for the most part because there were too many to choose from and besides there were plenty of private eye, mercenary and secret agent books to occupy my time. But eventually I got more and more curious. I dipped my toe in with the "Mutants Amok" series and liked the water just fine.

So, a Traveler book was my next choice. The Traveler books stars, uh, The Traveler a guy in the wastelands with a booby-trapped mini-van full of weapons, a murky Special Ops past and not-so-sunny deposition. These were Dell's take on the genre, and they got Sci-Fi writer Ed Naha to pen the first volume. Horror and sci-fi writers tackling these post-apocalyptic novels just seem natural, mutants and gore abound. Naha is an interesting dude having written movies like "Troll" and "Honey, I Shrunk the Kids," but also novelizations for "Ghostbusters II" and the first couple "Robocops." As far as The Traveler books go, he traded off with John Shirley to pen the series.

"First, You Fight" is a solid set-up to the series. You get enough backstory and set-up to carry Traveler through his adventures. I'm sometimes worried with #1's in series like this that have to establish a lot of "world building," but Naha breezes through it. Naha also has an easy-to-read style and keeps the actions popping up throughout the narrative. The story is basically "Yojimbo" or if you will, "Fistful of Dollars, or as I say, "Red Harvest."

Traveler ramps (literally) is his action-van into a small town that is doing pretty well considering the rest of the U.S.A. is a real nightmare zone of road-mutants. There's two Big Bosses and Traveler doesn't like either of them, so he plays them against each other for his own benefit and along the way grows a little as a person. He re-finds his purpose in life and might even like playing the hero. There's gory kills and heaps of crossbow and knifing action, plus gunfire and explosions. Noice.

I'm going to read more of them, that's for sure. I'm looking forward to the Shirley penned episodes, since his stuff is usually pretty good, "The Specialist" is a nicely underrated "Executioner"-clone, but I did really enjoy Naha's clean writing style. The books themselves are also nicely slim, without the bloat of some of the 80's Men's Adventure paperbacks that became the norm.

Posted by bloodyspicybooks at 11:26 AM No comments: 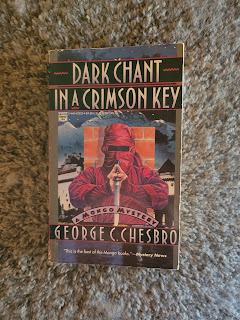 When I was a younger man, we'd go to Oklahoma City to visit my grandma which was always nice but like a lot of family visit-trips, it was also very nice to get away from your family for a while. When I was getting to be book crazy, I looked up all the used bookstores in the phone book (aging myself) and my mother and me would take a circuit. On one of these such trips I found myself with a copy of "Shadow of a Broken Man" by George C. Chesbro starring the world-renowned criminologist, former circus performer/martial artist turned private eye Dr. Robert "Mongo the Magnificent" Frederickson, who also happened to be a dwarf. I cracked that book open and it in turned cracked my mind open.

It was dizzying display of spies, assassins, horror, detecting, action and suspense as Mongo, in true private eye fashion, doggedly unravels a mystery. I read it in one sitting at my grandma's house and was immediately hooked and it was one of those first tastes of genre-bending fiction that showed me that not all detective stories had to be like all the others. And Mongo is such a wonderful character, stubborn, loving, loyal, smart as hell and a tough cookie to boot. His supporting cast grew over time, and they are all as colorful and interesting as him. Eventually I read the books to hang out with friends. The Mongo books slip in and out of genres, sometimes straighter mysteries, sometime fantasy, sometimes horror, or sometimes they're international espionage tales. There's a Mongo for every mood.

But they were hard to come by, Chesbro was never a best seller and though the series lasted a long time there never was a lot of copies floating around, I guess. Or people just kept 'em. But I slowly got quite a few of them, but eventually I got distracted by other books and then suddenly it dawned on me one day that I had all these Mongo's to read.

"Dark Chant in a Crimson Key" really starts in 1986 with a book by Chesbro called "Veil" which was supposed to kick off a Men's Adventure series about a badass ninja-ish 'nam vet named Veil Kendry. Well, his published basically thought the book was too "high-brow" for the M.A. market and asked him for a rewrite. He liked "Veil" so instead he just wrote a different book. Enter John "Chant" Sinclair. A badass ninja 'nam vet out to be badass. As David Cross, he got three books out of the series and published "Veil" too boot. Sweet deal. The Chant books are top shelf, nearly ignored Men's Adventure books.

Veil showed up in the Mongo books eventually (which is where I know him from) and with "Dark Chant in a Crimson Key" so does Chant. I plucked this one off the shelf simply because it was a mash-up of all his series characters and I thought it'd be a fun ride.

Mongo is hired by a rich guy who controls a charitable organization who just got ripped off by the Master Criminal John Chant who used his cunning and master of disguise skills to funnel money and then brutally murder some people. Mongo is simply hired to go see how Interpol is doing on the investigation and takes the job mostly to have a nice Swiss vacation. But since this is a mystery/action novel he's soon in the middle of the trouble between an ancient Japanese cult of killers and the mysterious Chant.

Before too long his brother Garth, Veil and his lady friend/snake-expert are all there and backing Mongo up as he hunts Chant and slowly peels the onion of the supposedly ruthless killer. It's a short book that is always interesting, even if the middle is bogged down in a little too much talking. But when Chant shows up the pages light on fire. There's constant danger, ninja mysticism, CIA skullduggery and easy banter. Chesbro seemed like he had a lot of fun with this one.

I've been meaning to read "Veil" for years and now that I've reacquainted myself with Chesbro's world I'd imagine I'll get to it quickly.

Posted by bloodyspicybooks at 9:18 AM No comments: