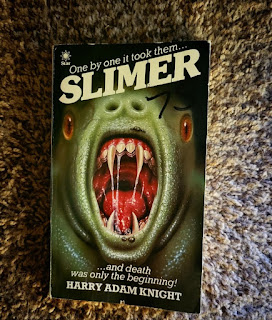 My brain is heading into horror. Halloween is around the corner and it's the holiday for me. That means horror books and movies. So, get ready for that True Believers! Horror paperback collecting is a true minefield of high costs and hard-to-find titles. You can still squeak out a lot of deals on Men's Adventure, but book sellers all seem to think everything is a "Paperback from Hell" and price accordingly. And, hell, I end up paying them.

"Slimer" by Harry Adam Knight or actually John Brosnan and Roy Kettle is one of those expensive ones. It also had a good reputation past having a bitchin' cover, supposedly the book actually delivered. I was intrigued. Now, "Slimer" has been republished and is quite easy to pick up in trade-paperback or as an eBook. But that just wouldn't do for a paperback weirdo for me. With a little patience I tracked down a "reasonably priced" Star books copy from England. In hindsight, I'm very glad I did. There's something intangible to reading a slightly batted mass-market sized book, especially in the sleazy action or horror variety. It's like seeing "Texas Chainsaw Massacre" at the drive-in, it's in its natural environment.

So, "Slimer" is not about the Ghostbusters pet ghost. A triple-set of couples are stranded on a lifeboat in the ocean after a problem with attempted drug smuggling plan. They end up on a deserted oil rig...that doesn't pump oil but is actually a genetic research facility trying to come up with a cure for radiation poisoning. But since this is a horror novel, they've obviously made a MONSTER. Brosnan and Kettle DELVIERED, man. This was a rollicking horror tale that rarely gets done these days. Horror writers/filmmakers in the striving to "legitimize" the genre often forget that horror is supposed to be FUN. Screaming in terror is the flip side to uproarious laughter, after all.

The characters are stock-jobs. There's an evil guy, a leader guy, a weak guy and then their girlfriends who are all sort of interchangeable. This being an 80s horror paperback the women have it rough. Once they all get to the oil rig, the story unravels like a lot of awesome movies mashed together and dripping with slime. There's "Alien" in there. "The Thing" is mixed in, plus some "Invasion of the Body Snatchers" and "The Blob" for good measure. And some Shark action. BOOM, all that means flame-thrower and M-16 action, gnarly kills, goo, shaky science, drugs and desperate plays.

It all really shouldn't work, but the authors roll it all together and comes out like a tasty horror-burrito. It's a perfect horror B-Movie on the page and that's not an easy thing to pull off. I'm very happy that I have another "Knight" book "The Fungus" to tackle before too long. If you go in expecting "The Stand" or "It" you might be disappointed, but just roll with the punches and have a good time with brain half-way off and I imagine any horror-hound would enjoy "Slimer."

Imagine the big three horror-movie slashers, Michael Myers, Jason Vorhees and Freddy Krueger, take a road-trip in some sort of evil-Mystery-Machine and end up on R.L. Stine's Fear Street. Be a fun time for all, I'd bet. But it sorta happened as all three of the gruesome killer got their own series of YA horror novels. These are books I wish I knew about when I was younger, but, hmm, for some reason I don't think they made it to the Scholastic Book Fair. Everything that was once adult became kid-friendly in the 80s and 90s, Toxic Avenger, Tales from the Crypt, even Rambo. I guess it makes sense that Jason, Mike and Freddy did too. Makes me wish that there was a Saturday Morning Cartoon starring Stephen King (as himself) where he tackled all the monsters and evil around his Castle Rock home. Yeah, through in a dog and a van and you got solid gold.

Anyway, the books are hard to get. Like ridiculously hard to get. As I've done a lot of major collecting in the Men's Adeventure/Mystery genres and know I'm really turning my attention to horror, which is proving to be a most welcome challenge to track things down and keep as much money in my wallet as possible. Just got to keep hunting. 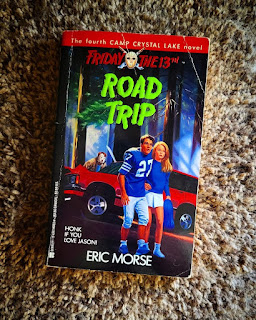 I started with the fourth and final (sorta) book in the series. "Road Trip" finds a group of cheerleaders and football folks trapped on a dark and stormy night at and around Camp Crystal Lake, which sounds like pretty standard stuff, but it's executed (get the pun?) well. This time we mostly follow Summer who's head-over-heels for bad-boy football-player Slick along with a group of dispatchable teenagers, a football coach and one NERD! Since this is a 90's YA horror the Nerd is obviously picked on by everyone, including the Coach and it just gets worse when they blame him for getting their van crashed and stuck on the aforementioned dark and stormy night. So, when the nerd finds the cursed hockey mask of Jason Voorhees, it's pretty easy to see where this is going.

Along the way there's a detour that seems right out of a Gold Medal paperback or EC comic. A local police officer has kidnapped his wife and her lover with murder on his mind. He drags them out into the woods with a hockey mask, which is a nice little twist at first you might think that the trooper is the latest curse victim/killer. His plan is to kill them both, stage it like a Jason-inspired killing since obviously the whole area is freaked out by Jason, ya know, since everyone keeps getting killed by him. It's a pretty adult story-line for a YA novel and a welcome way to get away from teenage drama for a few pages. Then the novel turns into the slasher picture we wanted as the nerd is transformed by the hockey mask into a hulking Jason-ish killer and starts beating everyone with a tire iron. There's some nice fight scenes, fakes outs and some bits of gore. It's a solid story to go out on, but the series really could have gone on longer... 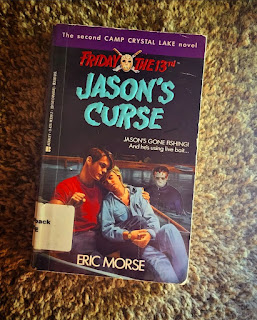 I read #4 first, just because it was the only one I had, I did have some luck via my good friend Inner-Library Loan and ended up with a copy of #2 "Jason's Curse" which is really a direct sequel to the first book "Mother's Day" (which I haven't read) so there seems to be a thru-line within the series and considering the movies hopped around so much, a little stability is nice. Morse does give you enough dig in with the story without reading the others. AND IT'S AWESOME.

Kelly is out for some Jason-revenge. Bad things happened to her brother in #1 and she's honing her skill to go hunt Jason down for good. Her plan to take her big 'ol hunting knife and pistol out and set traps gets a little muddled when her boyfriend and another couple insist on tagging along...you know because of needing victims. Well, lucky for Kelly a mentally challenged man finds the mask and becomes a hulking killer right before she decides to go so, she has someone to hunt. We bounce back and forth between the conflicted killer trying to grapple with his horrible actions but unable to control himself and slaughtering folks that were mean to him, the normal YA boyfriend/girlfriend drama and Kelly doing a "Home Alone" at Camp Crystal Lake with deadly traps.

This is a really gnarly book for a YA novel, grisly deaths and a nihilistic tone really set it apart from the regular books from folks like Christopher Pike or Diane Hoh that I read back in the day and well, now still too. Morse actually captures the dark vibe of the films and only waters it down enough to get it published. It's like Splatterpunk for teens. It's a damn shame these are so hard to come by and like have no chance of ever being republished since the "Friday the 13th" rights are so screwed up. I'll be hunting down the rest and probably spending a small fortune on them. Such is life.

...oh, yeah. There's a fifth unpublished one which is free on the authors website. I guess I'll read that one next.

Posted by bloodyspicybooks at 12:16 PM No comments: 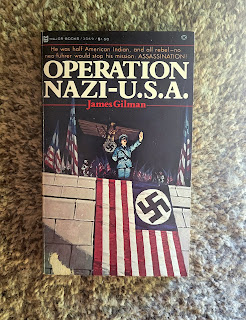 Now what we got here is one of my White Whales. Between a general interest in the books that Manor put out back and the day and the tantalizing review of this book of the Glorious Trash blog, I knew this was a book for me. Unfortunately, it's one of those uber-expensive paperbacks that are to find and harder to afford or should I say justifying the price for. Whenever Joe Kenney over at Glorious Trash reviews something the price seems to jump up!

So, I finally found a copy at price I was willing to pay. I still paid a lot, don't get me wrong. But hey, money is just for buying books, right? RIGHT? Anyway, don't tell my wife. Joseph Gilman wrote a couple more books under his own name and then a couple of Nick Carter: Killmasters in the 80s but that's about the extent of my knowledge on him, other than now I'm a fan. I'll get this out of the way right off the bat, this is one of those tongue-in-cheek affairs that I enjoy so much. It's wildly over-the-top and Gilman seems to be having a ball with it. If you don't care for that kind of thing, it might not be your book.

This is the story of a Rain Allison who is also known as the Scorpion and his duties as a member of the Peacemakers, one of those hidden government assassination/trouble-shooting outfits that would be absolutely terrifying in real-life. He came into this outfit back-ass-wards and so convoluted that it's not really worth mentioning other than its wild, he was an insurance salesman and I like it. Rain is a badass who fucks up a lot. He's got that whole 70's-Post-Billy Jack-Native American-badassery going on only with a lot more firepower and his own "War Wagon" that has more gadgets than Bond's Aston Martin.

He's out to stomp down some Nazi's which is one of my favorite things to read because fuck Nazi's. It's a race-against time novel only the race changes a couple of times. Rain drives around, kills Nazi's, pines for his lost love, talks about Native American stuff and his war-hero father, there's a kung-fu fight, an armored car-car chase, skinning people alive, the threat of poisoned water, revolvers with silencers.

Oh, it's a total BLAST! It at times it almost reads like a companion novel to Kin Platt's Hitman series. They share a similar tone and wry approach to the conventions of the genre. The plotting is a lot stronger in Gilman's book then the last Hitman I read. It's also first-person narration which, coming from Hard-Boiled Detective Fiction, is my first love. Rain is a fairly funny narrator who still delivers the action and thrills. It does seem like the set-up to a series, though it does have a definite end. I wish there were more, my wallet doesn't but I do. So, I'll have to make do with Gilman's Nick Carter's one of which stars a female assassin named Raina out for vengeance...hmm...interesting.

Posted by bloodyspicybooks at 12:03 PM No comments: