Donald Hamilton and the "Line of Fire" 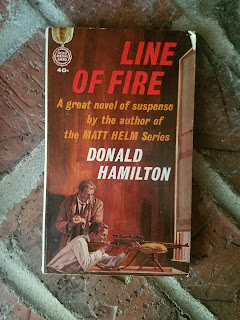 When I read "Danger in My Blood" a bit ago it lit the Gold Medal fire under my ass and I dug through my shelves and set myself up a Gold Medal To-Read Pile. It's got some Peter Rabe, E. Howard Hunt, Gil Brewer, Stephen Marlowe, and as an afterthought I looked at the Donald Hamilton shelf in my house. "Line of Fire" I had mentioned in that "Danger in My Blood" review, I read it years ago between two Matt Helms when I was on one big Hamilton kick. I remember liking it well enough, but younger didn't see everything that was lurking between the covers on this one. With the paperback in my hand I found that I was reading the first chapter and then the first turned into the fourth and I was just rereading it. Matt Helm is one of my favorite series especially the early ones; the higher they get the flabbier and exhausted they get. Series fatigue is a natural thing I suppose, but a lesser Hamilton is still a notch or two above most writers, he only suffers in comparison to himself.

It's often said that "Line of Fire" is a proto-Matt Helm, he wrote it a few years before the masterstroke that is the first Matt Helm "Death of a Citizen" and it's got a lot of the same voice. The weary professional tough guy voice of Paul Nyquist,, the causal information and opinions on various firearms and the hard-boiled violence is all in line with what you get when you pick up a Helm. The comparison is apt but it doesn't paint the book in a lesser light, because this is truly almost as good a "Death of a Citizen."

Paul Nyquist is a gun-shop owner, a veteran, a hunter and a guy who just shot a big wig politician. Right after he takes the shot with his 30-06 (and after he loving tells you about the rifle) a women bursts in the door to surprise him and the mob goon that is there to watch him make the shot. The goon pulls with Walther P-38 and Nyquist doesn't hesitate and blows him away with his rifle. The plans all gummed up and he goes on the run with the dame right? Well, not really. It's all part of the interesting curve ball that Hamilton threw in the middle of the book, which I won't spoil. The curve-ball really keeps the book from devolving into cliches and keeps the reader on their toes. Hamilton obviously knew the genre and this is work of a helluva writer working within his genre and turning the whole thing on it's head. Bodies do pile up and there are fisticuffs, gun-talk, few dames, cops, hoods and nosy reporters, it hits all the marks.  The suspense is constantly ratcheted up, the characters a fresh takes on the archetypes of these kind of books and its all burns into a nice bloody climax. They could have used this as a guidebook for anyone trying to write a Gold Medal Paperback.

This is really just a crackerjack novel of crime and suspense, the world grows smaller and small for Nyquist and he's caught in the middle of his friends, women and his enemies, sometimes all in one person. There's some convenient paperback stuff in here, mostly in the quick conclusions and instant trust variety, but nothing to hamper the enjoyment of the book on the whole. Hamilton mostly wrote Matt Helm's, a couple westerns and a few crime/suspense books like this one. "Night Walker" was reprinted by Hard Case Crime and I remember liking that well enough too, so I'll have revisit that one too. I wish Hamilton had some more stand-alones to his name, I'd be eager to dive in.

Posted by bloodyspicybooks at 8:04 AM No comments: