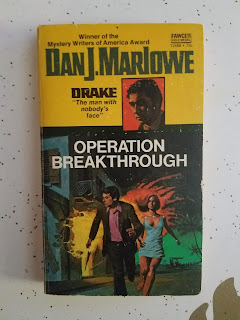 Dan J. Marlowe is correctly regarded as paperback royalty.  "The Name of the Game is Death" and "One Endless Hour" are stone cold classics (they work best as one bigger-novel) that are hard touch. In them we are introduced to Earl Drake (under a different name) a hard-case criminal who gives Richard Stark's Parker a run for his money. To top it off Marlowe's got a run in the 60's for Gold Medal with a great string of standalone hardboiled work that are nearly all great. Marlowe's real-life story is a paperback novel too full of amnesia, spanking women, local politics, bank robbers, death and drink. I'm not going to get into that too much, as there's much better places that delve into Marlowe's world. What I find interesting is that Marlowe seemed to work with a co-author a lot of the time. Apparently credited co-author on "The Raven is a Blood Red Bird" William C. Odell ( a Colonel in the U.S. Airforce) worked with him on the early Drake books at least, as his entry on the U.S. Naval Institute website credits him as wining a Edgar award that was surely the award the Drake novel "Flashpoint" won. Some online sources cite Fletcher Flora as the co-author to the stand-alone "Vengeance Man" as well. Then there's his noted working with convicted bank robber-turned-writer Al Nussbaum. I get the vibe that Marlowe played things fast and loose in life. I need to track down Charles Kelly's "Gunshots in Another Room: The Forgotten Life of Dan J. Marlowe" and maybe all my questions will be answered.

So, maybe Fawcett Gold Medal wanted another spy series to go with the adventures of their other series espionage characters and for some reason thought the cold-blood bank robber Chet Arnold, er, Earl Drake would be a good fit. Or maybe Marlowe just wanted to write about spies as he had done before in some of his stand-alone work and wanted to ride the wave of the good vibes from "The Name of the Game is Death." Who knows. Either way Drake became a freelance spy working under a shadowy Government man named Karl Erikson. This era of the Drake books is often kinda dismissed in comparison to his early work which is a shame. The first Marlowe book I read was one of the last Drake novels and it certainly turned me onto Marlowe's writing. The 70's were a weird time for Gold Medal, the emphasis had definitely shifted from standalone's to series work, probably trying to get all that "Executioner" money. There were ongoing series entries in stable series like Matt Helm, Sam Durrell and Joe Gall, plus upstart series like Daniel Da Cruz's Jock Sargent books. I won't even get into the "The Godfather" knockoffs they stuffed the spinner racks with. So, where does Earl Drake land? For my money he's the best Gold Medal spy of the 70's. Sure they're not up there with Marlowe's earlier glory but they are certainly strong works of Men's Adventure.

"Operation Breakthrough" starts off with a slam-bang heist, barrels through a "man on the run" story, then spy shenanigan's to a break out yarn. Earl Drake is a slick lead character with a nice man-of-a-thousand-faces-gimmick. He's stuiably tough and dangerous with his .38, but he's still a bit of a fish out of water when it comes to spying. This gives him a realistic-vibe, not making him a perfect superman, plus a bitchin' girlfriend names Hazel who's cool under pressure. Marlowe tosses full characters down on the page with ease and short work, all the side-characters seem real or real in a pulp way anyway. There's a continuing story going on here too; you probably need to read the early ones in order; as there's a lot references to past escapades.  If I remember correctly the later books are pretty stand-alone. This is really no-frills top-shelf Men's Adventure.

Posted by bloodyspicybooks at 10:02 AM No comments: 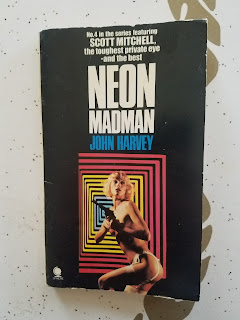 British author John Harvey is most famous for his Charlie Resnick Nottingham-based police procedurals. They are almost uniformly loved. I haven't ever read one as police procedurals is a sub-genre I just haven't ever latched onto. But Harvey got his teeth cut in the Piccadilly westerns, the English brand of American western novels by of the Spaghetti western. Books like George Gilman's Edge and Adam Steele. Harvey wrote some in the "Apache," "Hart: The Regulator," "Hawk," and more. He also wrote the W.W.II series "Deathshop," which I have but haven't gotten too. But what I got here is the forth book about Scott Mitchell a British hard-boiled private detective. All four books were written in a two year gap from '76 to '77. That's some fast-writing (especially cause that's not all the books her wrote in those years) and it kinda shows but that's also part of the charm of it.

Mitchell is fairly low-rent doing divorce work mostly and being self-deprecating. He's hired to get picture (the dirty kind) of a woman by her husband. He does it and then promptly get his ass kicked and sliced in his office by two thugs who may or may not be involved. Well, like any private eye worth his salt Mitchell sticks his nose into dirty deeds at the center and the cool woman who seems to have stepped out of a 40's film-noir. Along the way Mitchell gives his knuckles a workout, chases down leads, talks to people, tangles with a sadistic killer with one glass eye that he pops out and plays with; when he's not slicing with his switchblade, gets beat up some more by cops and just generally does the paperback-P.I. thing. You can tell Harvey can write wearing some of his aspirations on his sleeve. He and me are both fans of the "Out of the Past," the finest example of film-noir. Plus Mitchell is a nicely sardonic character who's wit and observations carry the book

"Neon Madman" didn't reinvent the wheel, it didn't even put a new hub-cap on it but it was pleasant in a comforting way. It's a standard second-tier private eye novel transplanted to England. Something in the Frank Kane, Henry Kane or Michael Brett vein. The pages flew by over a couple of hours in two days stretched out on a couch with a nice cuppa black coffee. I have no complaints about reading it, but it struggled to remember much of the plot a day or two later, so there's a lot of what you need to know. The original printings are super scarce and pricey. They do sport some pretty nifty photo-covers; some of the best examples of that style of cover, but probably aren't worth the price. Mysterious Press reprinted all four in two-doubles and they are available as ebooks for more reasonable prices.  I did enjoy it enough that I'm glad I have some other examples of Harvey's early word to digest but I probably won't rush into them.

Posted by bloodyspicybooks at 8:15 AM No comments: 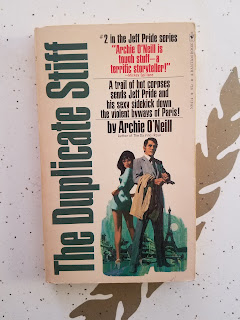 Archie O'Neil's Jeff Pride series has been with me for years. It's a simple story: I picked up a couple of cheap books years ago cause of the cover and promptly buried it in a sea of other books. Flash forward to man years later when Paperback Warrior reviewed the first book in the series and it got my off my duff to see what this series is all about. Go over to Paperback Warrior to read about who Archie O'Neill really was and just generally enjoy a much slicker kind of book review of the first book, which I also read, really dug it and then went out (to the internet) and picked up the rest of the books.

I got to admit the reason why I didn't read the series before is that Jeff Pride is a travel agent. It was hump I couldn't traverse. An action-packed mystery solved by a travel agent? Meh. Chalk it up to my prejudice against people who book tickets, I guess. Anyhoo, Jeff Pride is a lot more then simple trip planner, no he's got a background as an "international private investigator" (where do I apply?) for an outfit called Phoenix Security from which he's semi-retired from. He's also got Cherry. Cherry is one of them dames who only exist in the minds of men. She's hot-stuff, witty and wants Pride's bod. BUT she's also his ward (like Batman and Robin) after her father died and asked Pride to watch after her and Pride isn't that creepy. Cherry is a lot of fun and her and Pride have a nice plutonic Nick and Nora vibe of bickering going on. Pride's or O'Neill's sarcastic nature and wit really propel the books past a lot of the standard fare that used to clutter book racks.

In "The Duplicate Stiff" Pride is in his Paris office and in walks trouble or more accurately trouble (in lady form) bumps into him on the street and causes a stir. She wants Pride to help save her husbands neck with his company after the man he hired had been embezzling. Pride wants nothing to do with but gets dragged into after a murder rap hangs over his head. The plot is nicely standard, like a Taco Bell in a different town. There's a few women for Pride to boink, a seedy/dangerous Private Eye to tangle with, colorful friends, gunfights, car chases and a hardnosed French cop. The Paris scenery and Pride's relationship with Cherry combined with his Pride's glib telling of the facts give the book a nice flare. Jeff Pirde would have been right at home at 60's brand of Gold Medal Paperbacks is Archie O'Neill started writing them sooner. He could have shared drinks with Chet Drum, Constaine and McCall or Shell Scott and fit right in.

Though Shell would have tried to lay the mack on Cherry.

Posted by bloodyspicybooks at 8:09 AM No comments: