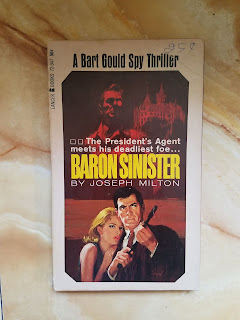 Going into this slim Lancer paperback I was fairly sure that the title character Baron Sinister was the bad guy. Spoiler, he was. Though sadly he was never identified as such which is a damned shame. The Baron-book is number five in a series of eight staring bored rich-guy turned super-spy Bart Gould which is a little lacking when it comes to super-spy names but Tiger Mann was taken I suppose.  Aside from the less then awesome handling of the names the book is all anyone would want from a 60's Spy-fi paperback.

Joseph Milton was Joseph Hilton Smyth and he started the series with one book "The President's Agent" in 1963 and Joseph Hilton after that Lancer had ghostwriters including the prolific Don Rico and the husband and wife team of Hal Jason Calin and Anne Calin (and possibly others) write the rest of the series under the Milton handle. But Hilton came back once and wrote under the Milton name because paperback publishing of the era was a screwy place. Apparently (if the internet is to be trusted AND its the same guy) in the 40's Hilton Smyth was arrested for being "unregistered agents of the Japanese government" by publishing a pro-Japanese stories in a magazine. So maybe spy-craft was in his veins. He also wrote some novelizations, some stand alone's, including "That French Girl" which got published by Gold Medal, Crest and a some other publishers along the way PLUS some book called "The Sex Probers," which makes me laugh. 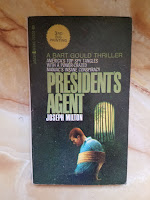 Anywho. Bart Gould is a Bruce Wayne type only he doesn't wear the pointy ears instead he spies for the Prez. He gets roped into going to Germany to investigate the disappearances of mild-mannered government employees who hold no vital information, so they know it isn't the Ruskies. Gould was just palying with his grandfather's collection of Derringers so on a whim he packs up his suitcase and loads his trick-sleeve holster with a Williamson .41 single shot Derringer and flies to Vienna. Once there he meets up vile baddies, old flames, ropes in the tried and true reporter friend on the case, drinks, sexes, rents funky European cars, meets a slinky Nazi Femme-Fatale, shoots some dudes, gets his friend killed and goes on a mission of vengeance against a old Nazi dick-head. The climax builds and is particularly nice as it involves a snowed in castle high mountains with a dark history of witchcraft, dungeon escapes, sword fights and derring-doo. The whole package is a slim-wallop of adventure thrills that hearkens back to the classics of the Ruritanian genre like "Prisoner of Zenda"or other swashbucklers and at the same time being 60's modern. A pleasant mixture of Dumas and Fleming.

Gould comes off better then some of the heroes of the day. He's going through the spy-mill for the fun of it and is flippant in the face of  grave danger. No dour reflections on the nasty business of spying or dull inter-office politics of intelligence agencies, just plan old rock'em sock'em cliffhanger thrills. The books assumes you have read earlier entries which I had not, Gould's backstory wasn't filled out thoroughly but, eh, I didn't need it. Rich guy = spy is good enough. Gould not being a true agent gives the narrative a lot of wiggle room, the secondary characters aren't secret agents, mostly made up of his friends accumulated over years rich play-boying and he has to act more like a private eye to get his information with no government contacts abroad.  It's a nice mix of a lot of pulpy-genres. 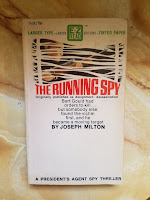 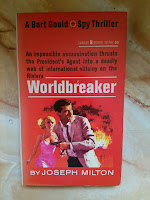 This is pretty much what I want when I pick up a spy-fi book. It's not the absolute best iteration of
this genre, not as high as a Malko or a Man from W.A.R. book by Michael Kurland, those sorta of stand lone from the pack. "Baron Sinister" lagged a bit in the early pages but cranked up the juice rather quickly and could have had a bit more of the main villain and made him a bit more dastardly. But those are small quibbles in a book that can be read in a couple of hours. As a guy who's been buying secret agent books since he was a teenager, I think I've had this particular book for like fifteen-years and never read it until now which I can say about WAY too many books. I amassed several other of the series and I look forward to reading more Bart Gould adventures and of course buying the rest of the books. The thrill of the hunt.
Posted by bloodyspicybooks at 6:40 AM No comments:

Fleuve Noir, the French publisher of cheap crime novels has been around since 1949 producing the kind of quick, tough reads Gold Medal did in the U.S. in fact it reprinted a fair share of them along with producing it's own home-grown version of gritty crime stories. The tidal wave of James Bond hit them early, so early that Jean Bruce's OSS-117 globe-traveling super-spy beat Bond to the punch. So, OO7 and OSS-117 were hits and they floodgates opened. Some where along the way, I think there was a specific imprint denoting Espionage books with the line. I'm not too clear as I don't speak French and the on-line info is sketchy. I'd be grateful to anyone with more knowledge on the subject to speak up. Book-nerds UNITE! 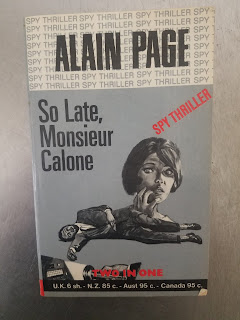 Years ago I found a shelf full of Gerard de Villier's Malko novels for cheap while on a road trip. I didn't buy all of them because I had never heard of it before. That decisions haunts me as it took a lot of time and money to track down the rest of the books. It also explains why I'm a book pack-rat, "when in doubt, buy it" that's my motto. Well, Malko led me to to The French Wold Newton a tantalizing glimpse at a whole world of unknown Pulp to me. Spies, adventures and detectives abound. But to my dismay (and hours upon hours of internet searching) I had found the precious few had ever been translated. It was a search I would dive into every now and then and it would inevitably yield no results.  Sure, a couple of OSS-117's made it to America, a handful more seem to be published in the England, Malko tried to make a big splash with Pinnacle in the 70's but not enough were published for my taste buds. M.G. Braun's super-spy Al Glenne got 4 books in the 60's. Not quiet a spy but a groovy Indiana Jones-type named Bob Morane got some English translations, Frederic Dard's super-cop San-Antonio got some too. If you want to count Germany in too, Mr. Dynamite by C.H. Guenter and Jerry Cotton both got too few translations. But sadly the righteous Kommassar X seems to not have. 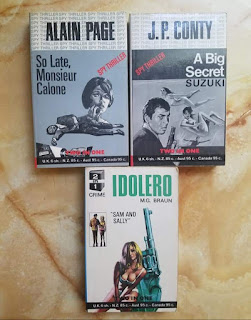 But there was more with awesome names like Mr. Suzuki, Nick Jordan, Coplan (who I knew from so Eurospy films) Angel Face, The Monocle, The Lone Wolf, TTX-75 and the list goes on. M.G. Braun who wrote the fun Al Glenne series also wrote a series about a husband and wife team of detectives and one day I stumbled upon an online listing for a double-novel with an Alain Page crime book on the flip side. The money just flew out of my wallet and I had it coming from England. Once I got the book I dived deep trying to find out if there was more. The publisher "Two in One International Publishers, London" did indeed publish more then the single volume. Soon I had two in Crime Thriller category and FOUR in the Spy Thriller category. All of them are translated volumes of Fleuve Noir books from the 50's and 60's. They were published in seemingly small numbers in England in odd sized little double novels like Ace used to do, only bigger. The cover art is swipes from the original artwork and they feature a "who's who" of French spies and tough guys. As I can tell I have all the published books, but who knows? Again let me know I always have money for books burning a hole in my pocket.

BUT now, are the books any good? I spent a fair amount on my little French-Spy-Fever kick...without reading any of them. That's how I roll, dive head first and they took a while to come to me from across the globe and my interested would up getting tied up else where and they sat on my shelve for a few months. Fickle, I am. I watched on of the OSS-117 Eurospy flicks on Blu-ray the other night and my appetite was whetted for cheap espionage thrills. I random selected a Calone novel by Alain Page to start my expedition and what did I find? A lot of fun. 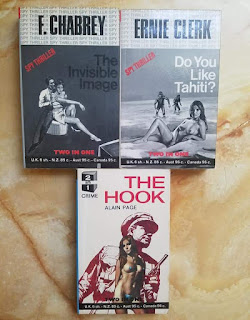 Colane is a French secret Service ace assigned to figure just who keeps killing regional directors of the service. Colane gets the job after his boss dismisses the notion asking the Americans or the British the aid of Matt Helm or James Bond and the French born heroes Matt (by F. Chabrey) and Coplan are busy. Luckily Colane just wrapped up an assignment and is available, they also mention Napoleon Solo and Colane kids that he might join U.N.C.L.E. some day.  The book had me right there, I was a long for the ride. After that their were plenty of derring-doo and the threat of another Russian revolution that kept the ball up in the air. Alain Page was very prolific as a novelist besides Calone he created a Raffles or Lupin type gentlemen thief Terence Lane, alias L'Ombre and wrote for the movies and even eventually directed. Also a bunch of stand-alones in the Fleuve Noir line.


It moves lighting fast and is over in a sub-200 page count, it moves a little too quickly sometimes and I had to really concentrate to get the names connected to characters who run from one bloody attack to a secret rendezvous to a hide-out to send some coded messages. Translated work depends a lot on the translation so some of my problem might have been a result of that. But it wasn't too distracting. Colane himself seems like the classic Eurospy film lead, i.e. he's a right bastard who smiles all the way through while doing terrible things. His treatment of a female enemy agent is beyond harsh and cruel. Top it off he doesn't think twice about it, actually he's very casual about everyone's terrible deaths, what a nice guy. Thought you probably want a rat-bastard as your secret agent. I decided I thought Calone was completely unlikable dick-hole right as the last page got flipped, the book was over faster then my mind could make itself up. As much as I didn't like Calone as a guy he certainly worked as a bad-ass through out the narrative and it was enjoyable see what he's be up to next. This is all conjuncture but I get the feeling that Calone is 2nd-trier French-Pulp secret agent, more a stock character then an actual character.  If I was able to read another Calone, I MAY think twice but I'd probably read it anyway just to see how much of an ass he can be.Would I recommend it? Meh. It would be a hard sell to most people, if the history behind the book interests you enough and you've had your fill of Nick Carter and want a taste of something similar but slightly different, then yeah I would.

This is an on-going deep-dive on this super obscure characters (in the U.S. anyway) and it's been fun so far to compare to compare to their American and British compatriots. So stay-tuned.
Posted by bloodyspicybooks at 11:05 AM 2 comments: