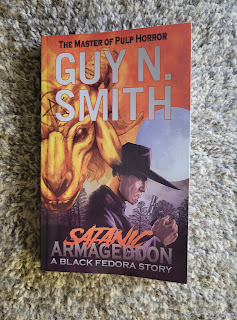 When if first watched "Garth Margenghi's Darkplace" several years ago I was in on the joke. In one of those wonderful twists of fate I had recently discovered the mutant crab infested, werewolf and other assorted monsters of the world of Guy N. Smith. Like any sensible reader when I discovered that there was a series of books about giant crabs killing naughty folks across the U.K. I knew it had to be mine. "Darkplace" stars Mathew Holness (someone just give him buckets of money to make things, okay?) as a, well, hack horror writer of the 80's vintage. Margenghi is based on a few other writers of the very British style of horror, but Guy N. Smith is probably the main inspiration. And I think it's a loving tribute. Holness seems to have a real passion for the 70s/80s paperback world, check for "A Gun for George" some wonderful, loving jabs at the world of Men's Adventure. Oh, do yourself a favor and watch "Darkplace" too.

Now, I love Guy N. Smith's work. There's no pretention. The pedal is always to the metal. The ideas a wild and BIG. It's pure and nasty brand of pulp. It's especially how I like my horror fiction which has the tendency in this post Stephen King world to be bloated and overwrought and sadly often devoid of giant crabs. "Satanic Apocalypse" snuck up on me, for some reason I had completely missed that he had written a three-book series about a mysterious spy/government fixer named John Mayo who wears a big black fedora and often finds himself mixed up in the occult realm of espionage. While waiting for the first book to arrive from England I got a jump on the series with the third book, one of Smith's last published works via Amazon prime. It's a nice little mass-market sized paperback from Sinister Horror Company. So, they can still make 'em the right size, hmm.

John Mayo is a retired spy-guy who lives with an understanding girlfriend, his hat and a .38 revolver. Other than that, we get the briefest of backstory about a gruesome murder of his family you don't know much else about him. Of course, I'll probably learn more when I read book #1. He gets turned loose on an assignment to stop a home-grown terrorist cell who's been committing random acts of murder. Oh, and they have a devil-worshipping leader. Oh, and he's supposed to find a missing lady. Now here's the rub. This is a particularly good book? Probably not. Everything falls into Mayo's lap with very little effort on his part. He just happens upon the baddies, the girl and everything at every first available opportunity. Is it a fun book? YES. There's a bit of action, there's a bit of satanism, some bombs, some gruesome murders, forest fires, talk of fedoras and even a miniature version of the "animal on the muck killing everyone having sex" novel that Smith is famous for. I could almost see the paperback cover "Guy N. Smith's WILD BOAR."

Guy N. Smith's work isn't for everyone. This one might not even be for his usual audience, as that there's really no "horror" going on here. It's really just a Men's Adventure novel in a horror-books-clothing. I'm excited to try out the other Mayo books, there a little like Sabat-light. The origin of the character is fun too, Smith just saw a guy at a wedding refusing to take his hat off in the church. Then the guy gave Smith the hat! Character's are everywhere.

Posted by bloodyspicybooks at 8:00 AM No comments: 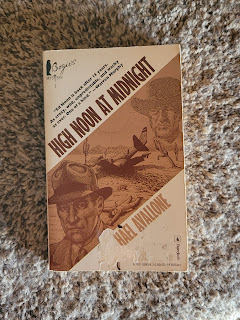 Every now and then you got to dive into the Nooniverse. In the plethora of literary private eyes there's none like Ed Noon, a true man for all seasons and problems. One the same time he's an old school tough-guy detective out of "Dime Detective" and sometimes he's a Don Quixote in the world spies, evil scientists, femme fatales, crooks, cops and even Presidents. He's all of that as well a movie and baseball buff who has soft heart and a (luckily) hard head. Ed Noon is a wonderful filter for Avallone's passions and obvious love of fun, action/mystery yarns.
I found Ed a long time ago, when I was in high school with a short stack of used paperbacks. They were in rough/falling apart shape and patched with tape. A lot of Avallone's books in used bookstores seem to be a rough shape. I think these were read, passed around and read again. That's a nice compliment to a writer. Over the years I've managed to get a pretty complete set (a couple still illudes me, dammit) but it's not the easiest run to collect as Avallone and Noon bounced between publishers from Perma and Gold Medal to longer runs at Signet and Curtis. Like the back and forth of publishers the series conforms itself to the paperback trends at the time. 50's hardboiled detective novels that morphs itself into a P.I./Spy for the President that transforms itself if a kooky 70s mystery series full of quirks and pulpy death into a transcendent novel of an alien invasions, Gary Cooper and forgotten indemnities.
If you're new to Ed Noon "High Noon at Midnight" isn't the book to start with though it's one of the pinnacles of the series. Ed's taking a vacation when a little man comes up to him on the plane and offers him a job as an assassin. Then the little man is knifed in the back. Then the plane explodes. That's just the beginning. Ed's flung into a world of androids, impending invasions, alien abductions, evil asylums, fembots, growing old, Gary Cooper as the voice of the good in the world, socks to the jaw and the love of old friends. Ed spends a lot of the books not knowing if he's sane or not, if what is happening is ACTUALLY happening or if he just fell off the rockers. Scenes flow back and forth in time and space as Ed's broken brain (with the help of Cooper) tries to do what he does best: stick the pieces of the puzzle together. The chorus line of Don Quixote, The Three Musketeers et. all is a highlight, Ed getting a pep talk from his childhood (and adulthood, Ed never grew up) heroes to make it through is a nice touch.
Noon is different from most paperback private eyes in that he's not the ultra-tough Hammer-type, nor is he the therapist-turned-detective that Archer is. He's got a little both in there, but mostly he's just a regular joe thrown into wild situations straight out of the pulps.  Even the proposed alien invasion kind of works like one of the many invasions of "Operator 5" pulps. "High Noon at Midnight" also has echoes of Avallone's previous works the mind-controlled Noon adventure "Shoot it Again, Sam" and the spy-adventure "The Man from Avon" which tackles dem pesky aliens. Avallone surely had them in the back of his brain as he wrote what would be the final Ed Noon. Though there are rumblings about an unpublished sequel "Since Noon Yesterday" that might surface someday. I read it too early. I might have been too young and dumb, but on this second read it just struck me how it's such a wild and fittingly melancholy final chapter in the series.
Back when Ed Noon had a red, white and blue direct line to the President to get his adventures he got sent a funky manuscript straight out of "Argosy" in "Death Dives Deep." This was one of the books that I got in first round of Ed Noon madness back when I was a teenager. I had always fondly remembered it as it was one of those books that broke me out of my reading rigidness. At the time I pretty much just wanted straight-private-eye-mysteries of the hardboiled variety. I had passed through my secret agent phase and wanted something like Mike Hammer all the time, with the occasional Shell Scott palate cleanser. I went into the Noon's thinking that they would be a little like Shell. Of course, they aren't, they're ain't nothing like an Ed Noon. Back then I still preferred the older Perma/Gold Medal/Ace Double era of Avallone's work. Now I'm all about how weird and wild it got as he crossed over into the Curtis run. Those are pure id on the page. 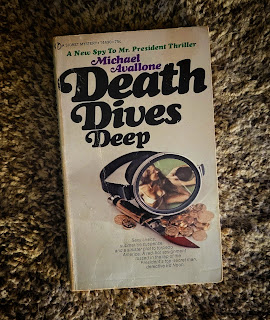 "Death Dives Deep" starts out with a little manuscript that starts all the trouble. It's a wild sea-tale of adventure with gold and killer mermaids. IT'S FUCKING GREAT. You can pull it straight out of the book and run it as a short story without any trouble. Makes me wonder if that's where it started. The Prez sends it to Noon and the yarn spins from there. Some of the Spy-era Noon's read a lot like Spillane's Tiger Mann books (cockeyed of course) where a lot of the espionage takes place in the jungles of the New York City with blazing .45's. By the time we get on the way to Florida by the femme fatale-super-villainess the book is almost over, but it's a slam bang ending. Along the way we tackle The Bermuda Triangle angle, various murders, an FBI shanghai, the Communist threat, Noon's love of the one-of-a-kind Melissa Mercer and a President in critical condition. There's a lot of stuff packed in here. This is where the Noon's really start a more experimental stage. What's started here is the nugget of what "High Noon at Midnight" expanded on. It's the kind of progression that rarely happens in a long running series. It keeps the later ones just as fresh and vibrant as the early ones, just in different ways.
I mean, I can go on and on about Michael Avallone and Ed Noon. They taught me a lot about writing, about an author's voice and series character writing. Avallone wrote a ton of books. I pretty much always get some joy out of them, but so were obviously for paychecks and that's no dig. People turn their noses down on professional pulpster/paperback writers. That's a lot of crap, it's incredibly hard to write for money AND still make it entertaining. He proved it time and time again from "Mannix" to "The Man from U.N.C.L.E." to "Friday the 13th." Will I ever get to the "Patridge Family" novels he wrote? Hell, maybe. I'm re-reading to avoid reading the final unread ones on the shelf, saving them for some mythical rainy day or sunny backyard with a cold beer read. A day with some friends between the pages.
Posted by bloodyspicybooks at 8:56 AM No comments: