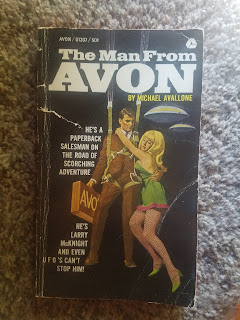 I had a fever when I picked up "The Man from Avon," man. I felt like a heap of crap, I needed me a pick me up and in that fevered state I figured I was in the perfect mindset to visit the "Nooniverse." Okay, "The Man from Avon" isn't an Ed Noon story but the wild antics and undisputable laws of the Nooniverse apply to the entirety of Michael Avallone's work. So, just go with me here, okay? Plunge into the weird.

Ironically it was his novelization to "Cannonball Run" I read first without knowing who the author was, but that's another story of misspent muscle-car driving youth. Then I knew his name before I had knowingly read one of his books though the seemingly always snarky "online critics" of his work. Their words made it sound like his writing was bad, but hell, it sounded SO good. After that I actually discovered who/what a Avallone book actually was via a four-pack of dollar used books one day at my local dealer. Two Ed Noon's, his Man from U.N.C.L.E. and finally "The Man from Avon." I was hooked. The years past and I discovered Avallone wrote all the stuff I like, hard-boiled private eyes, Men's Adventure vigilantes, super spy-fi spies, tawdry little noir-types, novelizations, and most of all PULP!

It had been too long between readings of Avon for me to remember much about it. I just remember finding it to be a bunch of fun bounded together between paper. Jerry McKnight is the top salesman for Avon books which works as the perfect cover for his actual job as the Government's top super-duper secret agent hunting down them pesky U.F.O.'s. Jerry is a little more idolized then my old buddy Ed Noon. Noon is a bit of a regular schlub thrown into the crazy, mixed-up action. Larry is Steve Holland with a case full of books. After a very real U.F.O. is seen by a sexy librarian in Old Bridge, New Hampshire Larry is parachuted down with different sexy lady with his Avon case in tow to investigate. The book actually owes a lot to the Operator No. 5 pulp tales, stalwart hero against a seemingly fantastic enemy. It boils into a cross-country chase full of strangely electrocuted victims, U.F.O. chases, spy-fi weaponry, beautiful virgins, characters named Gil Kane, odd city-wide blackouts, and valuable information about Avon book's products. Seriously, if you dig old paperbacks (who doesn't?) this part of the book is worth the price of admission. Clues hidden in rejected of Robin Moore's "The Green Berets," discussions of John Creasey's The Baron, spy books and even John D. MacDonald. Not to mention a little about how the book selling business actually worked back then. It's only let down by a slightly rushed ending, but still a more than worthy entry into Avallone's library. 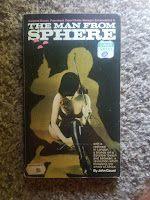 You'd think this would be the only example of spy/bookseller in the paperback world, but a year later in 1968 Sphere book across the pond put out "The Man from Sphere" by John Gaunt. This is a bit more traditional (from perusing) Bond-like spy tale about a hero named Galahad Brown. I'll report back on this one. But here's where it gets even wilder, there's another HIDDEN (sorta) Larry McKnight adventure. 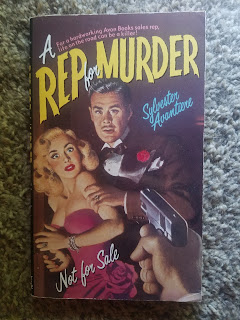 "A Rep for Murder" stars Avon salesman Larry McKnight Jr. on the trail of a missing (naturally beautiful) romance novelist and running from a murder rap. Larry Jr. isn't Steve Holland, he's a bumbler trying to save his skin, job and trying not to dishonor the McKnight name. This book was written as a promotional "not for sale" item for Avon's 50 year anniversary it appears on some bibliographies of Avallone, but not all. The book is clearly a work of Avallone's its wild, wacky that barrels forward at break-neck speed and its full of wonderful old mystery clichés. Avallone seemed to have a lot of fun writing it. Plus there's tons of references to Lawrence Block's Matthew Scudder, Ed McBain's 87th Precinct and other great Avon titles. It's a hoot, very much like Avallone writing on of those 40's mystery B-Movies. 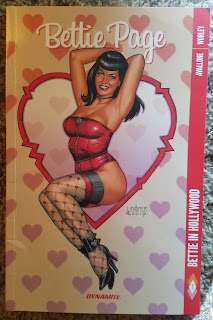 Want more? Larry McKnight shows up again! This time in Michael's son David Avallone's work on the Bettie Page comic book put out by Dynamite. In fairness, I received this graphic novel from David Avallone himself, not to review but as a thank you for sending him a harder to find Ed Noon for eBook transfer. And I'm very happy I did, Vol. 1 is a blast! McKnight is Bettie Page's boss as she works for the government as a spy hunting down wild villain's, filming a sci-fi movie, clashing with cults, and basically being a wry comic book hero which is enough for me. It's a rollicking good time and it's nice that old McKnight is still kicking around. Also check out David's work on the Elvira comic, its just as good and enjoyable. I need to catch up with more of his work as he's written both The Shadow, Zorro AND Doc Savage! Too cool. Though a Ed Noon comic book would be something...*cough* *cough*

Can you tell I like Michael Avallone? He was a one-of-a-kind writer and that's something commendable, not many authors have a voice strong enough to to be instantly recognizable. I like one-of-a-kind writers, just like I like one-of-a-kind people, they kind of folk you can yak at for hours and hours. Reading an Avallone is sorta like listening to a buddy spin a yarn at you. Do yourself a favor pick up a Avallone and have a good time. And don't trust just any online reviewer...

Posted by bloodyspicybooks at 2:50 PM