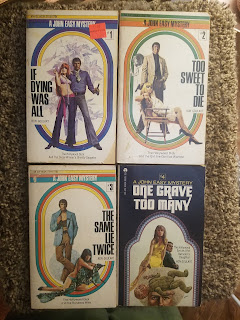 California is a crowded place to be a Private Eye, especially in the 70's. You have all the sons and daughters of Marlowe beating the trail down, what could an author do to stand out? Answer: Be Ron Goulart. Goulart is a seasoned professional. He was a seasoned professional in the 70's writing the continuing adventures of Kenneth Robeson's The Avenger, Vampirella, Flash Gordon, Lee Falk's The Phantom, not to mention his detective work in the fields of Golden Age comic books and pulps. Then there's his wild and wacky sci-fi adventures. In the middle of this he set his own P.I. creation upon the paperback world: John Easy.

Easy's a easy going guy. He packs a .38 in a shoulder holster, has an office and a suffering secretary, tools around in his dusty VW Bug and finds beautiful women, catches murderers and encounters oddball characters that populate a semi-surreal California. He's a archetype-character with enough foibles to be interesting but no tragic backstory or dark secrets that plague more modern heroes. He's just a semi-regular guy who who'd you like to ride shotgun with on some crazy adventures. The 70's oozes from the pages of these slim paperbacks. They are half-way between a Carter Brown and a Ross MacDonald, but fully Goulart's own voice. Goulart knows all the tricks, his collection "The Hardboiled Dicks" is could be a text book in a correspondence course on writing punchy crime fiction. House within that tome is stories by greats like Frederick Nebel, Richard Sale, Lester Dent (one of his two GREAT Oscar Sail stories), Raoul Whitfield, and others. But I bet the one Goulart liked best was Norbert Davis's tale about the shady Max Latin. Davis could be hard-boiled and hilarious in the same sentence. The Easy books are sort of like that but filtered for modern (70's) audiences. Easy's can crack wise and crack skulls and pick up the dames while doing it.


The 70's were a weird time for private eyes. They were morphing from the cookie-cutter paperback heroes built on the Marlowe or Hammer pre-made mix of the 50's and 60's. Some got more psychological and dived deep into "why" people commit crime. Some took "The Executioner" cue and had numbers on the covers and lots of action, rarely were the main characters in these books actual detectives but say "The Sharpshooter" by Bruno Rossi still worked like a P.I. novel just with more blood and guts. Others like Easy, Brad Lang's Fred Crockett, L.V. Roper's Renegade Roe, Alan Reife's Tyger and Cage books stuck more to the formula and produced the next wave of paperback heroes like Brett Halliday's Mike Shayne, Henry Kane's Pete Chambers, or Richard Prather's Shell Scott. These are meat and potatoes characters. All of them could have headlined a weekly TV show coming on right after "Mannix." After Robert Parker happened a lot of these types of characters dried up and the wave of Spenser/Hawk knock-offs flooded the market, some of them are great, a lot are lame.

Easy is a 70's guy, he's got a little of the left-over groovy 60's vibe. I appreciate book covers, but I think what's in the book is more important but MAN, the covers of these book nailed the tone and fell of these novels. The turtlenecks, the sports jackets, ascots and sultry women. Goulart did a lot of work in short periods of time. His "ghost-written" work is a bit hit or miss but when his heart was in a novel it's a lot of fun. The Easy books are uniformly quick fun reads with decent mystery plots and fast bursts of action. I could have read ten more of them if Goulart had written them. Later he wrote a series of books where Groucho Marx is a detective which I should probably read as I'm a sucker for Golden Age of Hollywood mysteries. He also wrote a wonderful stand-alone called "The Weissman Originals" about a slippery detective named Rudy Navarro who with the help of art dealer Briggs tangles with the mafia on the trail of original art stolen by those asshole Nazi's during W.W.II. Also check out "Ghostbreaker" a half of an Ace Double that collects his humorous take on the paranormal investigator genre.
The book are easy to get a hold of as an ebook or audio book but they can be a little harder to track down in their original form. It took me a few years of occasionally looking to find the final book (and the only one who's cover sticks out like a sore thumb) but I've never paid more than 5 bucks (including shipping) for one, so don't break your bank.
When I see the anyone talk about the Easy books (hell, a lot of Goulart's work) it's to knock it as fast hack-work. I don't see it, Goulart is just writing quick and clean with his tongue in his cheek. I suppose a lot of people aren't in on the joke (or just don't find it funny) but if your in the right mood any of is books will give you a hour or so's worth of fun. Who could ask for more?

Posted by bloodyspicybooks at 7:55 AM