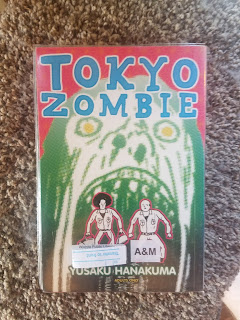 I do enjoy a good zombie tale. In fact my high school years were a marvelous time of countless watching's of "Dawn of the Dead" the 1978 one, "Evil Dead" (close enough to zombies) and "Return of the Living Dead" plus the sequels and rip-offs. From Italian fare like "Zombi" to a couple of truly bonkers Japanese pictures called "Stacy" and "Wild Zero" which my local library had for some awesome unknown reason. But by the time Brad Pitt is starring in a zombie picture I kinda got bored with the whole thing, save yearly watching's of "Dawn" and "Return." So, who knew lurking in the depths of that same public library was this little manga called "Tokyo Zombie" that's just as bonkers and loveable and some of my favorite zombie-tales.

"Tokyo Zombie" is a pleasantly juvenile take on zombies, martial arts, pigs, class relations and the apocalypse. It stars two jiu-jitsu experts Fuji and Mitsuo who accidently kill their boss and go bury him in the garbage-made mountain called Dark Fuji which is the epicenter of the rise of the zombies due to toxic waste. Interestingly what happens next is a much crazier version of what George A. Romero would do himself later with "Land of the Dead." The rich stay in control and live in a walled city and use the lower class as slaves. Which is probably fairly actuate. Sigh. Any-who. In "Tokyo Zombie" the rich are bored and their only entertainment is zombie fights, professional-wrestling style bouts between human fighters and well, zombies. There's fighting, pig-first revolution, good dogs, zombies, gore, wild death and mutilation. Drawn in a intentionally in a style called "Heta Uma" which means "good - but bad." It's very cartoony and simple way that is still very effective. It's a lot of fun and not an ounce of it is serious.

Yusaku Hanakuma doesn't have any other translated work which bums me out. If you like zombies or weird and wild comics this is a lot of fun and a real quick enjoyable read. I'm a late bloomer when it comes to Manga. I guess I've always felt a sense of being overwhelmed. Where I grew up with the glut of American comics as a kid and feel some sort of foot-hold; manga is the undiscovered country and "Tokyo Zombie" proves that I need to dive deeper. Also it proves that libraries are pretty rad.

Posted by bloodyspicybooks at 11:30 AM