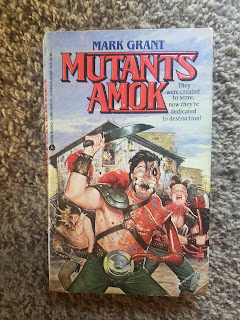 The 90's were a weird time for Men's Adventure fiction, a lot of the gun-ho stuff with mercenaries and vigilante's had fallen to the waste side. They were replaced by more and more Science-Fiction themed series. No doubt a natural progression from the post-apocalyptic series of the 80's. There were series like "PSI Man," by Peter David, "Horn" by Ben Sloane, "Cade" by Mike Linkader, "Tracker" by Ron Stillman, etc. etc. I guess everything had to be "high concept" for the extreme decade. "Mutants Amok" came around in 1991 and it's definitely a wild take on the the apocalypse. Mark Grant was a house name for David Bischoff for books 1-4. Dischoff was mostly known as a sci-fi and tie-in writer, penning novelizations for "Gremlins 2," "The Blob," "The Philadelphia Experiment," and working on properties like "Alien," and "Space Precinct" along with his own work.

"Mutants Amok" reads like an R-Rated Saturday morning cartoon of my youth. Strong-jawed hero takes younger hero-in-training under his wing in a world full of mutants, robots, explosions, fighting and airplanes. If it had included dinosaurs it would have hit every 90's trope. It's got a comic book quality too it only with more sex and gruesome violence. In some ways it also reminds me of a Troma movie on the page, "Class of Nuke 'em High" gone wild; only a slightly more restrained. Thirteen year old Roy would have loved it with all his little heart. Thirty-four year old Roy still loves it with all his normal-sized heart.

There's mutants running amok in "Mutants Amok." It's got a bit of a "Planet of the Apes"-vibe as there's a ruling class of mutants, divided by work/class, much like Orangutans, Chimpanzees and Gorilla's with a slave-class of humans in the Apes movies. Bischoff takes the ball and runs with it, crafting a wild and wacky world of some shaky-logic and every-damned-thing-plus-the-kitchen-sink full of mutant guts. It's clear that his tongue's in his cheek because its just SO goofy and light hearted. Our hero is Max Turkel who is a badass human rebel out to fuck up some mutant shit. He's side-lined throughout a lot of the book due to a plane crash, so he mentors Jack Bender a human slave who has a secret tree house hideout. The slow-build of Max and Jack's budding friendship/mentorship takes up the middle of the book. There might be too much of it; the book gets a bit sluggish in the middle. Plus there's quite a bit of "world building" to get through, luckily that's all mutanty-gory-fun. But with the kidnapping of Jack's girlfriend Jenny the book slides right into a climatic action scene with multi-armed Mutants (guns in all four hand, 'nach) and ninja mutants with swords. Bullets' fly, robots get cut with samurai swords and mutants get ran over.  Basically the book screams at you: "THIS IS A LOT OF FUN!"

And you should agree.

The book does end on a bit of an "Empire Strikes Back" note with Brain-General Torx (which makes me thinking of Brain-Guy from MST3K) who's been hunting Max down the whole book hauling Max off and Jack pledging to go save him and (maybe) rescue his lady Jenny. It's a nice grabber for the next book "Mutant Hell" but its also kind of a let-down to have this much of a "on the next episode of..." kind of ending. Luckily I have book #2 but that's it and these suckers are pricy and hard to find, a bit of a wet blanket.

All that aside, this was a helluva lot of dumb fun and I enjoyed every page of it. The sex, the action, the mutants, even the thinly veiled Hobbits called "Fobbits," that showed up at absolute random" all gave me exactly what I wanted out of a book titled "Mutants Amok." It's a shame that these haven't been reprinted in this modern age of "Paperbacks from Hell"-level appreciation of wild and wooly books these seem ripe for eBooks at least, considering the price they go for online.

Posted by bloodyspicybooks at 8:18 AM