A Trip to Fear Street - "Lights Out" and "The Surprise Party" by R.L. Stine

Sorry again for the gap between this post and the last. I've cranked out a 90-something page feature length movie script for the microscopic production company I'm involved with over the last few weeks which has taken my whole attention. This one has a good chance of being our first full-length picture, a transition for us from short films to the big guys. I'm incredibly excited about it, now all I have to do is re-write and re-write it some more then probably write the novelization because that's a dream of mine. And all that's before we start the long, arduous process of actually MAKING the movie. But it'll be painfully fun and I can't wait. What kind of movie is it you ask? A horror movie. After my co-producers and I decided that we wanted a horror feature I decided to ease myself into it with some books.

Besides it seems like every summer I get in the mood for some horror in my life. I usually read a few horror books and take in more then a few horror flicks. Last year I took a trip down memory lane with one of R.L. Stine's YA horror novels, "Broken Date." It was like an old friend at the door with a six-pack of free beer. There was a point in my young life where I probably read more R.L. Stine then anything else. All from the school library in those little rebound paperback/hardbacks. Horror movies got me into reading and writing later via Joe R. Lansdale, but R.L. Stine was an important foundation to my love of horror and really thriller/suspense fiction in general. Everyone my age seemed to have read at least one "Goosebumps" or "Fear Street" or at least owned them for the covers, like my best friends who's long shelf full of "Goosebumps" made me envious as a child. Mostly cause, sigh, he didn't ever read them. Some people.

So I started buying Stine's YA books, cause I didn't have enough books to buy. I'm mostly trying to track down his Fear Street titles (damned nostalgia, making them harder to find then they used to be as everyone my age seems to be buying them up) and other YA horror titles released in Stine's wake. I no longer remember which of the individual titles I read back in the day but images still are stuck in my head 20 plus years later, a testament to the impact of Stine's writing skill. When I started looking into the YA horror movement of the late 80's-early 90's I was shocked to see how many books written. Authors like Christopher Pike, John Peel, Diane Hoh, Joseph Locke, plus YA novels based on such R-Rated horror films like "Halloween," "Friday the 13th," and "A Nightmare on Elm Street." Crazy time. They also are some of the last examples of beautiful painted covers on mass market paperbacks.

And obviously Netflix's new trilogy of R-Rated "Fear Street" movies wetted my appetite for these books. It's a very fun, throwback horror bunch of movies by the way so check them out! 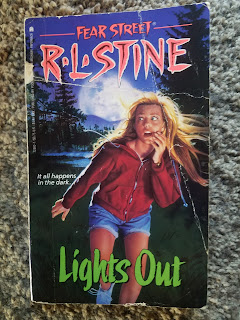 Fear Street #12 "Lights Out" is one that I sort of remember from my
younger days, mostly because it had a total "Friday the 13th" vibe (going to far as to namecheck the series) since it takes place at a summer camp. I probably read it before I had ever seen a Jason Voorhees movie but like all 90's kids I was aware of all of the popular monsters/slashers of the era. It stars Holly who's a scaredy-cat in a teenage girl's body. She's totally un-prepared to be a camp consoler at her Uncle's Camp Nightwing but does it to help him out. Once there she's frightened by bugs, snakes, the woods, the other mean girl consolers and then by the murder of her boss. There's spooky vandalism, Nacy-Drewing, things that go bump in the woods, lots of teenage angst romance (which even bored me when I WAS a teenager) and a slam-bang finale. The "mystery" of who's the murderer and would-be-camp-killer is kinda obvious, but hey it's a YA book. Stine writes cleanly and is a master at the chapter cliff-hanger. He knows his audience and delivers a book full of fun if your in the right mood or of the right age. 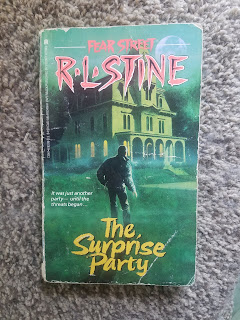 The second trip is for book #2 "The Surprise Party." A year after the death one of their friends (shot by a rifle the woods, yeek) teenager Meg is trying to throw a party for her friend Ellen who's coming back to visit. BUT someone doesn't want the party to happen, cue threatening (home) phone calls, lunch bags full of blood (actually paint) and then some light attempted murder. There's spooky woods, jokes at Freddy Krueger's expense and a "Dungeons and Dragons"-like game at could be the root of some spooky stuff. It, like "Lights Out," functions more as a mystery/suspense novel then out-and-out horror. There's no supernatural element in either of them, but they both move along like a well-oiled machine of impending dread. I think by book #12 Stine had the formula down better and it's overall a little tighter then "The Surprise Party," but I might have just enjoyed the camp/slasher vibe of "Lights Out" better.

Look, the only reason for me to read these is pure nostalgia. Without I have no idea how much I'd actually enjoy them. It's interesting to be at the point in my life where cyclical nature of pop culture is focusing on the 90's. It also just makes me feel old. I enjoy reading them for the same reason I still like The Hardy Boys Casefiles series: they remind me of simpler times and the tell un-cluttered stories that are pure fun at full speed. "Fear Street" and "Goosebumps" before it set me on a path of loving horror fiction and monsters in general and for that I'll be thankful.

Posted by bloodyspicybooks at 10:27 AM