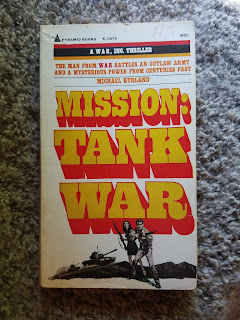 An early morning cat induced wake-up call and a pending COVID test gave me plenty of time stretched out on the couch on a crisp fall morning with no pressing engagements. Although suddenly from a shelf in my office a book started yelling at me. A few years ago I read a book called "Mission: Third Force" and it knocked my socks off. That is if I was wearing socks, usually I don't. Anyway, Michael Kurland wrote that book as the start of a three book (should have been longer) series about Peter Carthage a, uh, troubleshooter or agent for Weapons Analysis and Research, INC. The second book was calling me this morning. I've only resisted this long in reading it by shear will power because now there's only one more W.A.R. book to enjoy. I read the book cover-to-cover, so I suppose I did have a pressing engagement.

Michael Kurland has written a fair amount books, a lot of science fiction and novels about Sherlock Holmes arch-rival Moriarty among stand-alone's. Stuck in the late-60's boom of spy-fi novels is this three book series that is very different from the sea of Bond-clones. Peter Carthage works for W.A.R. which is a company that provides weapons of war, training and plans for their clients. Also will fight them for the right price. Say, like in "Mission: Tank Force" you are Sheik in a country that just struck oil and your British protection is running out and there's vultures circling, you can call W.A.R. and they can help you out. Carthage and his comrades got to such a place to teach a fresh country the art of tank warfare and battle opposing force as radically different as a former Nazi and a supposedly the supposedly 900-year old Hasan Sabbah and his drug-induced army of killers. The action is tight and well throughout but it's the fun, devil-may-care employees of W.A.R. that are the real draw. Their banter and friendship is palpable and the dialog is witty and crisp. Along the way, there's tank-fights, drugging's, ambushes, trick shooting snakes, and beautiful women hitch-hiking in the desert.

Kurland writing Moriarty novels is a easy stretch, the W.A.R. books have a old-fashion quality of sweeping adventure but bring to mind examples like Alexandre Dumas to Manning Coles' Tommy Hambledon and Rex Stout's Nero Wolfe mixed the with adventurous spirit of Leslie Charteris's early Saint novels. But more importantly they are just incredibly fun, well-written examples of different type of espionage fiction. This a series that could have last ten more books or could easily be picked up today and continued. The first two seem to available cheap as eBooks and paperbacks reprints. The originals sport of great paperback artwork and can be found fairly cheap too, so either way just GO OUT AND BUY 'EM!

Posted by bloodyspicybooks at 8:43 AM