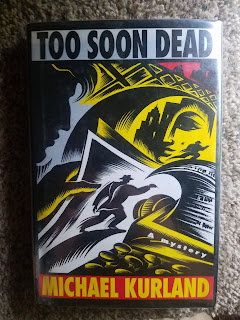 It may seem like I'm on a bit of a Michael Kurland kick, having just reviewed "Mission: Tank Force." Might be true, though I have read and wrote two other reviews (plus the one on the site) which are saved for an upcoming publication by that man-about-town Justin Marriott. Either way, yeah I'm on a Michael Kurland kick. That War Inc. novel got me to order this novel and hell, this novel got me to buy the other one in the series. So, watch out for that soon I suppose.

When my wife and I first got married we lived in a third-floor apartment in a brownstone from the early 1920's. It was a grand kind of place. Though like all of us it showed age and wore many scars. She (my wife, not the building) went though years of bad health, which is thankfully better now. But those first years were pockmarked with many nights where she simply had to go to bed nearly right after she got off work. So, what is a guy like me to do with free evenings? Obviously I read but I also got very into B-Mystery movies from the 30's and 40's. Cause I'm a hip guy like that. Mr. Moto, Charlie Chan, Mike Shayne, Boston Blackie, The Lone Wolf, The Saint, The Falcon, etc. etc. The hardwood, built in bookcases and grand fire place made the apartment feel like a set of one of those movies. I miss the joint, of course you could also feel the wind blow through the windows, so maybe I don't. Anyway, it's a format I truly love in movies, i.e. around an hour chock full of humor, mystery and various shenanigans. "Too Soon Dead" is a lot like a 30's B-Movie because you see it's full of humor, mystery and various shenanigans.

It's 1935 and Alexander Brass is a heavy-weight newspaper columnist, kinda a Damon Runyon-type with stories about nightlife and colorful criminals. His employee Morgan DeWitt is the Archie Goodwin to Brass's Nero Wolfe and narrates the tale in a flippant style, see he's a budding novelist plagued with writing doubts. Though Brass is a lot more active than Nero, he does keep Morgan and his assistant, the unflappable Gloria around him to do the leg-work. A man comes to Brass with the blackmail kind of pictures but not actually to blackmail anyone then quickly leaves all mysteriously. Brass sends a newspaperman out to follow the man but then they both end up brutally dead and Brass is on the case. The plot happily twists and turns with various jams and scraps. Being the 30's there's Nazi (the dicks) involvement, Charles Lindbergh and Amelia Earhart land an autogiro, brass-knuckle'd punches, there's fictional writers for "Black Mask," safes are blown, safes are looted, communists pop in, there's tons of consumed sandwiches, dirty pictures and burlesque dancers. All da good stuff. Interestingly enough this book also mentions Hassan-i Sabbath or The Old Man in the Mountain and his cult of killers which heavily played into "Mission: Tank Force," wonder if it pops up in any other of Kurland's work.

This 250-ish page hardback also made me long for the days when that was a standard hardback word count. Not the overly bloated books today. And they wonder why people don't read as much, who can hold onto a 700-800 page book for long enough to read it. I'd have to start going to the gym to do that. I reminded me of stacks of digested Donald Westlake and Stuart Kaminsky novels from libraries. Michael Kurland is rapidly becoming one of my go-to-guys. I enjoyed this book a lot, maybe not quite as much as his War Inc. novels but that's splitting hairs. I'll have to dip my toe into his Moriarty books next. Thankfully both in this series have been fairly recently republished so they aren't hard to come by.

Posted by bloodyspicybooks at 8:18 AM