The Shadow & Me: "The Romanoff Jewels" by Maxwell (Walter Gibson) Grant 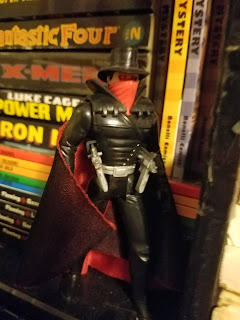 I was the perfect age for The Shadow in 1994. I had been poised (brainwashed) by Hollywood to lap up the glamorous adventure of arguable the most famous of the old-school Pulp Heroes. I was four-years old in the theater mesmerized by Tim Burton's "Batman," then I got caught up in Dick Tracy fever the following year. Then more Batman and The Rocketeer plus the discovery of Indiana Jones. See? I already had molded myself into pretty much the same guy I am today, just smaller. A couple years later I found out about The Phantom too. "The Shadow" was to be the next Batman. Though, really Batman was still the next Batman. I got the action figures, trading cards and I remember really wanting the lunchbox. The picture starred Alec Baldwin, John Lone, Penelope Ann Miller, Ian McKellen, Peter Boyle AND Tim Curry, which is a seriously stacked cast and was stylishly directed by Russell Mulcahy. I loved (and still do) every minute of it. Sadly, it didn't really click with audiences and didn't produce a couple of sequels. The movie is a amalgamation of the different versions of The Shadow. The radio version of The Shadow was different then the magazine version and so on. The fluid nature of the character is only fitting as The Shadow is full of surprises. The Shadow wasn't new to movie theaters though, a handful of almost uniformly bad B-pictures that pretty much ignore all the cool-stuff about The Shadow and focusing on bad-mysteries. Though the 1940 serial is a lot of daring-doo fun.

Later in my book buying travels I discovered some of the reprints, this was about the same time I was finding out about Doc Savage, Man from UNCLE paperbacks, and stuff like The Saint and The Avengers, Steed and Peel that is. Again, the perfect age around middle school to dive into the dark and wild world of The Shadow. I never had (until the last couple of years) finding Doc Savage books in the wild, hell I actually just bought 70 issues of the actual pulp printed magazine in a garage fifteen minutes from my house. But that's a different story. The Shadow was harder to find and it sucked cause I liked him a bit more then Doc. Later I found The Spider and I like him a bit more then everyone. So, though I love The Shadow, I've really only read only a few of them. I've collected quiet a few now and am going to make an effort to get them read. 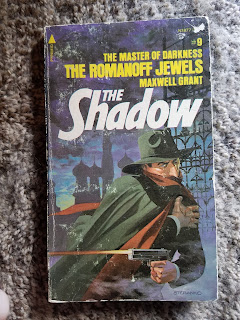 Sometimes when I got too many options I make it too hard on myself in deciding. I got a stack of Walter Gibson's books and they all look good enough to eat, so which one do I start? I found myself at an impasse one morning looking at all the pulp on my shelf. I googled some titles got mixed answers and finally just picked out the one that had a cool cover and the word "Kremlin" on the back. "The Shadow #9: The Romanoff Jewels."

The Shadow exists in a wonderfully mysterious world that no longer exists, well, it probably never actually existed at all. That's the way The Shadow would want it. It's a world of looming danger, quick action and mysticism that perminated the "real" world. It's also a place of hard-bitten gangsters, spies, and all the other stock pulp characters. The world of the Shadow feels like there's peril in every drop of darkness. A golden dagger will fly at you, your drink will be poisoned or a burst of Tommy-Gun will perforate you. "The Romanoff Jewels" is probably no-one favorite Shadow story. Not that it's bad, it's wonderful. But with every long running character there's ups, downs and middles. This feels like a middle to me. There's the trappings of The Shadow. Booby-traps, dark allies, enemy agents, bombs, legendary lost treasure and double-running-to-triple crosses. It's a whole lot of exciting amusement. Gibson is a master of the cliff-hanging chapter, making just flip through the pages. "The Romanoff Jewels" is a fine (short) book, but if you haven't read a Shadow before you might want to try another one. I remember liking "Murder Trail" a lot, it's full of Zeppelins. Can't go wrong there. 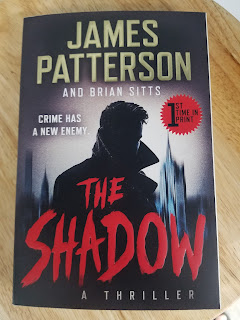 Now, okay there's an Elephant in the room, or maybe it's just a shadow of one sulking in the corner. This last year James Patterson along with (in smaller print) Brian Sitts brought The Shadow back. I had been following the development of this book since it was announced. I can't say I was super hopeful about it. I really don't like to rag on anyone but James Patterson doesn't really do anything for me. I've tried to understand what the mass-appeal is but his work doesn't click with my sensibility. Which is odd cause it's clearly a form of pulp. I did enjoy one of his earlier books "The Midnight Club," but now that he opened his Patterson factory and just mass-produces novels written by others the cocktail is so deluded it won't even get you tipsy. "The Shadow" is so watered down and thin it reads like a YA novel and it's "near future" setting feels like an easy-out for something when you have no idea what to do. It feels like The Shadow was dropped into an already written manuscript about something else. The whole book feels like a non-commit and it's a shame. I tried it from the library when it was first released. I didn't finish it. Then my addled-brain convinced myself to buy it to try again. I didn't finish it then either. It'll be on the shelf with the rest of The Shadows though.

"The Shadow" is cooler then Batman. There I said it.

Posted by bloodyspicybooks at 6:57 AM