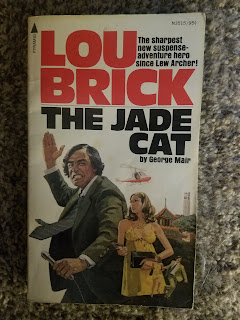 "The sharpest new suspense adventure hero since Lew Archer," the cover of this book declares. We might be in trouble folks. Since you know 'ol Lew wasn't much of an adventure hero and the only connection I can see between Archer and Lou Brick is a first name. But you can't judge a book on it's copy. So I dove head first into this book about the karate-chopping adventure hero named Brick. I had never read anything by George Mair, who was surprisingly a Scottish doctor in addition to a writer. He wrote a stand-alone or two but mostly wrote about NATO secret-agent man David Grant in a series of 10 books between 1964 and 1973. I guess spies were waning in 1974 so Mair unleashed crack investigative reporter Lou Brick onto the scene for Pyramid books, it was clearly designed to be a series but didn't make it to number 2.

Lou Brick is big-time reporter man who's always up to his neck in danger and excitement. He's like a lot of reports in these kind of books mostly just comes off like your standard paperback private eye. He's got wise-cracks, fists and is reasonably clever. I also LOVE his name, it just screams 70's pulp. He works for a national service and is fairly famous. We get to know pretty much nothing else past this. The book moves too fast to dive into a Brick-head. Seriously this book never lets up on the throttle. Nearly ever chapter break ends in a cliff-hanger that's usually quickly resolved in the beginning of the next chapter only to set up another wild death-trap for out man Brick. He's hired to find some stocks and bonds to keep a scandal from breaking out for a rich-guy plus there's some blackmail involved all by an evil crime cartel known as The Jade Cat. There's hotel bombings, multiple helicopters destroyed, ransom pay offs, women pulling (multiple) pearl-handled pistols from their purses, a fair amount of time spent in phone booths, double crosses, the Triad and dead bodies. Pretty good for a reporter.

This is incredibly shallow book, but it's also a lot of fun. It just stands up and moves so fast that the short-comings seem to vanish in a fog of daring-do. It also has an odd "got to my word count" quick ending that's a bit of a cop-out. Brick is actually a pretty solid hero for a paperback series, likeable enough with an interesting occupation that would have set him apart from the "Executioner" clones. I recently lucked into one of Mair's David Grant books in a big lot of paperbacks from eBay. I'll have to see how that fairs because Mair certainly delivers the action. The Grant books are available as fairly cheap eBooks, but Lou Brick has never been reprinted and is a little scarce.

Posted by bloodyspicybooks at 12:00 PM