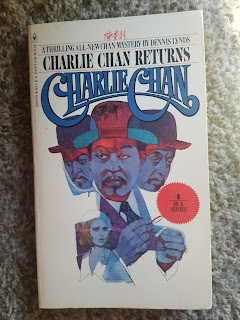 I'll just get out of the way. Charlie Chan the character, the movies, the show, the cartoon, the comic book and the mystery digest paint a very positive few of the Chinese detective. He's always the smartest man in the room and is a very personable, a likeable master sleuth when most of them are rather cold and calculating. All that aside they are work produced in a time with a straight-up dumbass-backwards view on Asians in general. They can be offensive. At least in the novels where there's no white man playing the Chinese detective from Honolulu. I will admit, I watch and enjoy the films; looking past the "yellow face" but I'm sure many people can't and they are probably right. When I read the book I just imagined Keye Luke as Chan and it worked great.

This is a curious case. Not the mystery (though it is very solid) but translating the golden-era detective Chan to groovy 70's New York where he gets tangled up in big case with the help of his son Jimmy, a NYPD detective. There's a fish-out-of-water quality to the idea of a very old fashioned man in the land of discos, dirty politics and rock 'n' roll clubs. So, its like Charlie Chan replacing Telly Savalas as Kojak. The novel does have a "made-for-TV-movie" feel probably because it's based on a un-filmed script by Ed Spielman and Howard Friedlander. And, all that aside it somehow it works!

It works because Dennis Lynds is a pro's-pro. The man could write seemingly anything. Take in point the last novel I read by him was "Night of the Shadow" a 60's-set adventure for the pulp-hero The Shadow, casting him as a super-spy in "The Man from U.N.C.L.E." mold. He also wrote Nick Carter: Killmasters, Alfred Hitchcock's Three Investigators books for the YA market, Mike Shayne's, Mack Bolan's and more! Plus he (as Michael Collins) wrote fantastic private-eye series about a one-armed detective named Dan Fortune and other mysteries under various names. I was eager to see how he tackled a Chan novel.

Surprise, surprise, Lynds wrote a nice, light fun mystery novel. The character of Chan is more like his film counterpart then the Earl Derr Biggers novel-Chan. Complete with "wise-sayings," and "Number BLANK Sons." Jimmy Chan, is a suave two-gun packing police man who isn't above having his visiting 'ol pop help him on a case. And it's a doozy, Victor Cosmo may or may not be blackmailing a group of famous/powerful people and he get's blown up in shower for it. Chan's on the scene having accepted the right (or wrong) dinner invitation. The cast of suspects are fun, there's a mayor candidate, a noted mystery writer, a respectable Kathrine Hepburn-type actress, a ditzy lover, and a Salvador Dali-ish artist. Then there's shot-gunnings, car chases, burglaries, a heist, mysterious ledgers, tape-recorded death threats, fun-jabs at the mystery genre and hand grenades. It's a lot for a slim volume but it all flows smooth.

PLUS its got one Bantam's glorious 70's covers from when they republished the Bigger's novels. If you like the old movies you're sure to enjoy it, if you're a Chan purist you might not. It's been years since I've read one of Bigger's novels. I remember enjoying but found it sort of stuffy in that grand old way that golden age mystery fiction is. "Charlie Chan Returns" is a 70's detective show in print and if you're like me that's one of your jams. This isn't the only Dennis Lynd's penned Chan adventure. Pulled from the short-lived Chan Chan Mystery Magazine, "Charlie Chan in the Temple of the Golden Horde" has been republished by Wildside Press a few years ago, along with one by Bill Pronzini and Jeffery Wallmann, Both are readily available on Amazon as eBooks and paperbacks. "Charlie Chan Returns" is out of print but not too expensive. Now, I'll just have to read Michael Avallone's novelization for "Charlie Chan and the Curse of the Dragon Queen," I'm sure it'll be better then the flick!

Posted by bloodyspicybooks at 9:36 AM