"The Night of the Shadow" By Maxwell Grant (Dennis Lynds) & The Avenger: "The Back Cariots" by Kenneth Robeson (Ron Goulart)

For some reason when the wind starts blowing colder I get in the mood for pulp, now I mean actual pulp stories that appeared in the 10 cent wonders that where the pulp magazines. Maybe its the gloom of of the cool of the air and darkness that sets in, makes me think of The Great Depression when the pulps ruled. As a kid my taste for pulps was developed by countless re-watching of the Indiana Jones movies, tied in with movies like "Flash Gordon," "The Rocketeer," The Phantom," and "The Shadow." I actually knew of the Shadow before the 1994 movie, via a two-VHS collection of trailers and a documentary on the cliffhanger movie serials. Where I saw wonderful bits of serials, Batman, Captain Marvel, Commando Cody, etc. etc. I was a weird kid, okay? But they all seemed so fast, and action-packed and thrilling with evil looking baddies and damsels in distress. They looked exactly like what a 10 year old boy would want to see. Which I mean, is exactly what they were. I soon fell in love with the books. I read a mess of them, but until a couple of years ago I hadn't really read any of the pulp heroes what with my time being spent on hard-boiled crime and Men's Adventure, but you need the fantastic every now and then so I dipped my toe back in and been dipping it in every now and then. 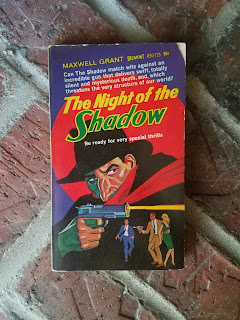 "The Night of the Shadow" is the first Shadow novel I have read in maybe ten years. My older self's pulp-taste runs toward The Spider, the Avenger, Operator #5, Secret Agent X and G-8. Doc and The Shadow seem to get lost in the mix. Dennis Lynds got me to check this entry out. He's writer who always puts out a good book whether its under his name or not.

The 60's incarnation of The Shadow is a representation of the pulp tastes of the time, just as the original one was to the taste of the 30's. Here The Shadow acts more like an active Waverly from "Man From U.N.C.L.E." with his companions acting like UNCLE agents. It's an overall odd mix of styles of pulp, the over-the-top near-super powers of The Shadow and the Bond-Mania flavored villain plot. It doesn't have the mystic quality that Walter B. Gibson brought to the character, Gibson's interest in magic somehow gets in between the lines of the books setting a prefect atmosphere. The magic quality of the speed and the twisty-turning narrative is something melds perfectly together. There will never be a moment in time again that is ripe for the kind of writing. Lynds take on the character is certainly what would have appealed to the readers of the 60's, but as Gibson's work is pretty timeless the 60's version is a bit more bland. The villains have a cool pulpy-evil plot involving weaponized organic warfare, but they themselves are forgettable stock characters. Lynds goes through the motions with other fun stuff like kidnappings, assassinations, the never-full secret pockets of The Shadow's suit that holds his whole costume plus a bucket-load of guns, etc. etc. it just never seems to kick into high gear. There's enough good stuff in here that I will read the other Dennis Lynds novels in the series, just with a few of Gibson's before. Dennis Lynds has a mountain of great work to read with his Dan Fortune novels, Kane Jackson and his work writing for Mike Shayne and Nick Carter. 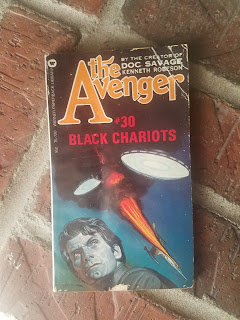 Ron Goulart picked up the Kenneth Robeson mantle to continue The Avenger series in the 70's, but they wise chose to keep the setting in 30's. Goulart gets a bad rap sometimes, I dunno why. I've always enjoyed his work whether it's his own series like his John Easy P.I. series, his humorous Sci-Fi novels, editing of anthologies or licensed work with Vampirella, Flash Gordon and The Phantom. His short story collection, "The Ghost Breaker" is a absolute blast, a fun take on the whole occult detective bit. He's an acquired taste I suppose, leaning into the humor more then some might like. He's obviously a student of pulp fiction, cliff-hanger serials, newspaper strips and the like and he can write the hell out of them. Paul Ernst created "The Avenger," AKA Richard Benson and his team of crime-fighters originally, though he shared Kenneth Robeson with Lester Dent for Doc Savage. If your not familiar with The Avenger it is in conception a mish-mash of The Shadow and Doc Savage, originally with a neat gimmick that Benson's "stone face" could be molded into anyone for a endless variety of disguises. It was later dropped when the pulp hero racket was waning.

His Avenger stories (and most of his work) are "light entertainment," they breeze on by and the pace never lets up, he build character through dialog both internal and external witty banter. The action is frequent and very much of the movie serial variety. He leans a lot on the character of Cole Wilson who was a later addition to the crime-fighting team of Richard Benson. In a lot of ways Wilson is the classic Ron Goulart character quick mouth, capable but not infallible. It's easy to see why he chose to have Wilson and Nellie Grey, the Emma Peel of her day get stuck together a lot of the time and bicker and blunder into the fantastic plots. Only to have The Avenger working his own way and swooping in to save the day with the help of the rest of the team. "The Black Chariots" are basically rocket-powered spy planes and the inventor (there's always a wayward inventor in pulps) is missing. The Avenger's team gets roped into the case and solves with with machine gun fights, aerial battles, escapes, sieges and the like. It's not going to change your life, but it's a very solid entry. Though Goulart's Avenger tales "The Cartoon Crimes," and "The Purple Zombie" are hands down the most fun taking place within the newspaper comic strip industry and the movie industry, respectively.

Books like these keep the pulp-hero concept alive in lean years, now there's a whole boom of New Pulp, with new characters, refreshed old characters and more continuations of beloved characters in books and comics. It's a good time to like the genre. I suppose its tied into the dire times we live in being a bit like the dire times of The Great Depression, escapism is a wonderful thing.

Posted by bloodyspicybooks at 12:02 PM