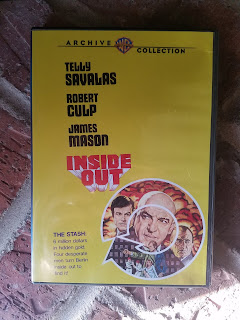 I haven't done a movie review in quite a while, though I've watched a ton of them; don't you worry. My triumphant return to movie criticism is about a little seen 1975 caper picture called "Inside Out" starring Telly Savalas, Robert Culp and James Mason. I've been going a little crazy on the manufactured on demand DVD's, which is a godsend for odd little pictures to see the light of day on DVD. I've ordered "The Scorpio Letters" starring Alex Cord based on the Victor Canning novel, "The Double Man" starring Yul Brenner, Rod Taylor in John Gardner's "The Liquidator," "Assignment to Kill,"  "Avalanche Express" with Lee Marvin and Robert Shaw, and "Inside Out." I've been picking up various MOD titles since Warner's and MGM started putting them out. It's nice to cross off films that have been nagging at me to buy/watch for years.

First off my main interest in this movie is the stars. I'm a big fan of Telly Savalas and Robert Culp. James Mason too, I mean you can't dislike James Mason. I'm such a big Telly fan that I have a vintage Kojak action figure. I was first stuck by him with "On Her Majesty Secret Service," he's truly the only Blofield that counts. Certainly the only one that is Bond's true equal; Donald Pleasence may have crafted the image of the character but he's quiet and demure and Charles Grey, whew boy...nah. Telly's nature swagger, toughness and intelligence came through in his Blofield. He's a presence on screen. He obviously is most famous for "Kojak," but he's works better on the big screen, he's bigger then life. He's a lot of fun in "Inside Out," playing a WWII-vet turned con-man/thief, a true hustler who doesn't worry about little things like money when there's five-star hotel rooms to stay at and manicures to get.  He's playing Telly but that's what I want to see.

Now Robert Culp was a lot more then just an actor. As a director and (co)writer he made on of my favorite private-eye movies "Hickey and Boggs." It's a real shame he didn't get to direct again because he knew story telling. Obviously I enjoy him as Kelly in "I Spy," it's easily one of the best spy shows of the 60's, being low-key and less flashy then some of it's competitors it counts on good story and interaction and fine adventure to hook it's audience. It's a real-shame that Bill Cosby turned out to be such a slimy-bastard because it sure puts a smudge on Culp's career. The Culp written episodes of "I Spy" are some of the best. In "Inside Out," he plays a career criminal talked into returning to the life for the big score. He plays it a lot like Kelly facing the danger of it with a twinkle in his eye.

The movie? Eh, it's okay. The plot is a lot of paperback-fiction fun, basically there's lost Nazi gold (I seriously never get tired of Nazi gold stories) and in order to get to the gold they have to break the only old Nazi-man who knows its whereabouts out of a military prison. Jason Mason plays James Mason with a slight German accent since he's the ex-commandant of a German military prison where Telly once was imprisoned. Mason comes to Telly with the scheme remembering him as a crafty fellow. Telly ropes in Culp and the as with most heist pictures rounds up a couple more for their team. One is Günter Meisner who was in Willy Wonka and played a Nazi's a lot in the 70's although he was actually in a death camp during the war, he's a welcome face; an actor you've seen a lot but wouldn't know his name (I do cause I'm a weirdo) and Doris Kunstmann as a nurse who Culp falls in love with after one boinking session, a morning-after game of chess and a silent montage lover's stroll. Plus Aldo Ray as a convenient buddy of Telly who is running the American's shift at the prison. The plan involves having Meisner, who's character is an actor, play Adolf Hitler and trick the old Nazi-man into giving the location of the gold. It's a fun scene and makes little sense when you think about it. The gold is unfortunately hidden in East Germany, though further complicating matters.

The main problem is that it's far too light-weight, there's never a hint of real danger, even when folks die. You never once wonder if our team will get the gold. Everyone goes along with the plan with like no hesitation, risking their lives and careers for the hint of the treasure. Every obstacle is meet with near instant solving and the few ties a "tension" falls flat. It's a shame it's a fun premise (which is totally ripped-off for "Wild Geese II") and has a good cast which looks like their were having fun making it, but the lack of real stakes makes it ultimately a little forgettable. It's a nice way to waste a couple of hours but I wouldn't seek it out unless you love Telly and Culp like I do.

Posted by bloodyspicybooks at 12:18 PM