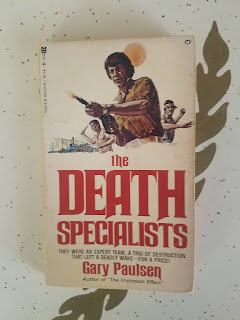 When I look back on my reading life there's several several authors that seemed to jump-start me onto my present reading path. In high school Joe R. Lansdale got horror-movie-obsessed me to read mysteries with Hap and Leonard which led me down many a dark and dangerous alley on the page, of course. Then Ralph Dennis got me interested in those numbered paperbacks from the 70's where guns were blazing and women were loosing their clothes on the page of course. But way before that in a reading lull in middle school I read Gary Paulsen's "The Hatchet" and books were cool to me suddenly. "The Hatchet" is a book a lot of people my age have a strong affection for, a lot of folks say that Paulsen really only connects with young dudes, but my wife read "The Hatchet" and everything else she could by Paulsen then too. I also own several actual hatchets because of the book, you know just in case. So, when I found out that earlier in his career he penned a Men's Adventure book called "The Death Specialists" I knew I had to read it being a sucker for mercenary tales and the early paperback originals of established authors.

"The Death Specialists" is a Major book, the publisher, not a reflection of the novel itself. It's a solid, workman like novel with flashes of Paulsen's clean writing brilliance. He also had another Major book called "The Implosion Effect," it says so right on the cover, so that's on my radar now. I'd imagine Paulsen had read Frederick Forsyth's "The Dogs of War" a couple of years before; they both have a emphasis on the planning of the mission and a similar general feel, though "The Death Specialists" is definitely the B-movie version. Without Paulsen's nature talent the book would really be a third-rate version of Peter McCurtin's "Soldier of Fortune" novels but it was stronger then it should be coming out of a fairly small/bad publisher.

I'm pretty sure the protagonist is unnamed throughout the book, I might have missed it at the beginning but it was half way though the book before I realized I didn't know his name. Glancing back through I didn't see it. So I could be wrong, but it would make sense because anonymity is a big deal to this Merc. No pictures, no witness, he'll kill to keep himself unknown. The Merc (as I'll call him) is really a hard-boiled character, quickly killing though he does worry about his conscious creeping in. He's a cipher of a lead and the rest of the characters are only roughly sketched out. One of the more intriguing characters is The Quiet Man of the group nicknamed Hatchet (shades of Paulsen's later fame) who specializes in infiltration and quiet kills. Hatchet likes to put himself in a trance and is a lousy shot, but uber-deadly with his name-suggesting hatchet. The mission is to destroy a oil refinery in Central America by the very company that owns it and that's heavily guarded. It's a general suicide mission with a ticking clock-deadline but the moneys too good to pass up. To accomplish his goal the Merc gathers a team ('natch) that's fairly colorful but standard i.e. pilot, heavy gunner, infiltration, grunts etc. etc. There's some well placed and researched (as far I know) tactics and gun talk and their plan to take out the refinery is nice a pulpy-paperback fun. Along the way they tango with the CIA, a little sex, parachuting, battle the CIA, endure some mild torture, fight it out with a nasty 'ol Nazi and his private army and kill a couple of folks in public toilets.

"The Death Specialists" seems to have been the first in a proposed series, there's a nice tag for their next mission at the end but sadly it never came to fruition. Major Books was a fly-by-night kinda joint it seems so who knows what happened. Paulsen elevates the whole thing, but it does kind of drag in the middle with all the planning and then get wrapped up a bit too quick. Maybe he was getting close to his agreed upon word count, but it sorta feels lop-sided. All in all thought it's a solid-little piece of work, which has never been reprinted or anything to my knowledge but it deserves a look if you're into gritty 70's mercenary tales.

Posted by bloodyspicybooks at 11:18 AM