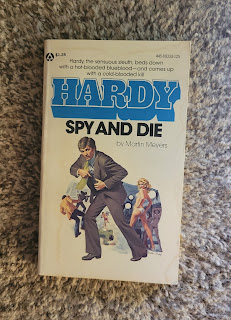 Martin Meyers five book Hardy series is a bit of a divisive lot of books for folks. Let's be fair, the (AWESOME) covers promise a lot of action-packed Men's Adventure and the books themselves are light mysteries, so there's no truth in advertising. I discovered the books via the always compelling Thrilling Detective website when I was specifically looking for funny mystery novels after tackling a lot of Shell Scott's and Dan Turner's. But they ain't no Executioner novel. Martin Meyers only wrote the five Hardy books and the novelization to the movie "Suspect" under his name, with his wife they wrote some historical mysteries novels. Patrick Hardy is a guy always bordering on pudgy who a self-confessed coward. He's also a New York private eye who lives with a bunch of books, carefully skimmed TV guides for old movies, a VW Bug and a big dog named Sherlock. Also, he's the recipient of an experimental Army program that has trained his reflexes to be a highly trained hand-to-hand combatant when he's scared. If someone attacks him, he might be scared shitless, but his body simply reacts with precision fighting moves. He mostly thinks about sex, movies and food, the order isn't important, but sex pretty much always wins out. So, yeah, these a sorta smut books. Everything it super tame but sex is one of the big selling points. The action, as it were. They are the in the Carter Brown/Ted Mark mold with an obvious love of mystery fiction behind them. The whole "government experiment" thing kind of sticks out, I wonder if it was an afterthought to try to get a little bit of action without changing Hardy too much. Though it's an interesting little touch.
"Spy and Die" was one I remember particularly liking because it as an espionage angle and I'm a sucker for when private eyes do some spying. Hardy is hired by a good-looking woman ('natch) to find out about a man or may or may not be her uncle who just died and left her a big inheritance. Between late-night movies, odd culinary concoctions and trips to the doctor and various bedrooms Hardy gets embroiled in secret agent shenanigans. There's a villainous Countess who works as a spy and fashion photographer, assorted spies and goons, fairly random sex, a few fairly nice fight scenes, lots of lounging and nice and daring finale. Hardy goes out an ask's questions or send his buddy to do some investigating and such but a lot the time we hang out with him and enjoy his lifestyle. Through the Hardy books I discovered some movies I liked and fantastic authors like Manning Coles.

Maybe folks are just jealous of Hardy when they put him down on the internet, sure the books are slight, and the plot may not hang together the best. But Hardy is engaging, and it was probably my ultimate single-post-adolescent fantasy, women, food, booze, books, old movies, a dog and being a private eye. These are goofy, caper mysteries with their tongue in their cheek. If you are in the right mind-set; you'll have fun but just don't expect a "Death Merchant" or a "Hardman" and you'll have some fun.

Posted by bloodyspicybooks at 12:13 PM