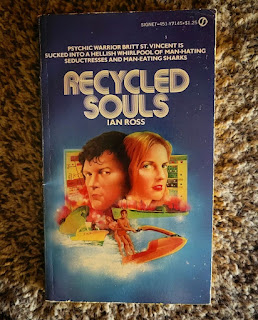 "The Mind Masters" series is one of those sets where I went on a tear and bought them all before reading any. The groovy-psuedo-Sci-Fi-70s-paperback is a weakness of mine, plus the covers, I mean THOSE COVERS. These books fit in that little niche of the 70s with stuff like "The Six Million Dollar Man," "Big Brain" or "The Enforcer" that took the vigilante/secret-agent formula and energized it with the fantastic. After "Mad Max" in the 80s it was really taken over by the "post-Apocalyptic" sub-genre when you got mutants, lasers, and robot and such.

The 70s as a decade had a big interest in the "mystic" and paranormal. So, Mind Masters is all about Britt and his ESP powers. He's also a badass race-car driver and a 'nam vet, 'natch. It's a gimmick that really sets the books out apart from the others on the spinner rack at the time, yet it's also trying to comfortably assure the reader that it's got a lot of the same ingredients as an "Executioner." It really doesn't, though. Here's one of the biggest oddball choices in the series. It's written in the Present Tense. It's pretty jarring until you get used to it and I'm not really 100% sure it works for an action novel. The rata-tat of present tense sort of cuts the action/tension off at the knees. A little purple prose goes a long way, this reads fairly flat. Like a court transcript of a Mack Bolan.

"Recycled Souls" is a novel of a lot of big ideas, it's got lesbian armies, sharks, jet-skies, sinking piers, torture, motorcycles and Britt can go all "Scanners" on the baddies. Sounds like a blast, right? It would be if Rossman really committed to writing a pulpy novel jam-packed of action, but what he mostly gives you is long conversations between character yakking about all the cool shit. The action really doesn't start until the very end, and it's done pretty quick. Though its handled well when it is there and is pretty awesome.

So, I got them all and didn't really care of this one. I liked it enough to finish it which is saying something because I don't muscle through bad material. It got a lot of interesting things going on, but the present tense and ratio between explaining and showing need to be tipped the other way. Rossman obviously cared about these books, a lot of them a quite a bit fatter than the standard M.A. paperback and he had some wonderful ideas for the story, just for whatever didn't execute them to their full potential.

Will I read another "Mind Masters?" Probably, I simply chose this one because it was shorter than the other ones. But this is the final chapter and maybe Rossman was just out of steam. Also, the rest of the series is under John Rossman's real name, this one switched to the pseudonym Ian Ross, maybe he was hoping to farm out some work, but Signet wasn't having it.

Posted by bloodyspicybooks at 12:18 PM