If there ever was a hardass to end all hardasses it would be Sand (one name like Madonna) Ennis Willie's Mafia killer turned quasi-hero. He shrugs off bullet wounds, beds willing busty women, uses his .45 in the way that the Men's Adventure God's intended i.e. blasting punks away and to hep wrap up the story in a brisk page count. 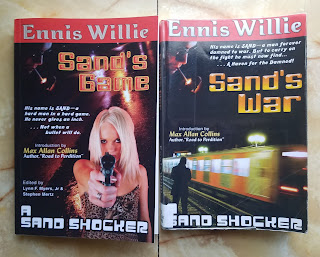 There was a big mystery about the identity of Ennis Willie (because it's a funky name, no doubt) with fan speculating that he could be a African-American poet named Willie Ennis or Mickey Spillane writing under a false name. Folks like Bill Crider, Ed Gorman, Max Allan Collins and Stephen Mertz dug and tried to figure it out like the mystery writers they are (and were) but it turns out he was a guy named Ennis Willie. Things work out like that sometimes. 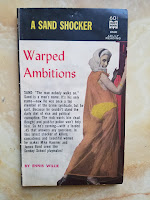 Sand was a big-shot mobster who gets fed up with the life and wants a divorce with the mafia. It's a messy break up with the mob always pestering Sand with bullets and killers of all sorts. To top it off Sand keeps himself in trouble outside of his mafioso past.  "Death in a Dead Place" is the new much better title, as the titles were made up the publisher. It was originally published as "Passion Has No Rule Book" which is a bold face lie otherwise us deviants wouldn't have "safe words." The books starts with Sand in the gutter with a bullet hole in his gut a kindly hobo/thief named Sticky helps him out. He shows Sand around the back alleys and Sand kicks some guys asses for Sticky, so they a fast friends. Then Sticky dies by swelling up to a giant tumor. Which sounds real bad and super gross. He had stolen a case which contained a shipment of a new type biological warfare with his sticky fingers, hence the name. Sand gets minor league pissed, shoots some people and pushes the cops around (cause he's that much of a badass) to figure out what and who killed Sticky. Also he figures he's saving his own skin since he was probably infected. Along the way he spreads the disease by banging a couple of chicks, I suppose. "Death in a Dead Place" is a short book, closer to to the "complete novel" of a pulp magazine then your standard paperback and it just rollicks right along to a satisfying, if somewhat obvious ending. 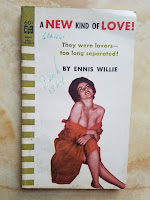 Merit was strictly low-rent and by low-rent I mean smutty sex books. Sleaze is the popular "hip" word to describe it. These were books sold for a little more then say a Gold Medal Paperback or a Dell to help cover legal charges for indecency charges and sold in more adult places.  Another one of these publishers was Novel Books, which is like if a Mustang was made by Cars by Automobiles and it had a star in Tokey Wedge a shorty private eye who loved boobs and mysteries, but mostly boobs. He was the star of the Novel Books line. Sand was the star of the Merit Books line, appearing in shorts in the publishers magazines like "Rascal" and  "Best for Men." Sand was all over the place dishing it out. In the sleaze world Sand was your Mike Hammer and Tokey was your Shell Scott.

See, Sand was a helluva lot better then his publisher. Sand should have been on the regular spinner racks with a name publisher behind him and a little editorial polishing and he could have been an "Executioner" before Don Pendleton or at least a cousin to Matt Helm. But it wasn't meant to be and Sand began to become a hard-boiled legend. Until recently no Sand novel was easy to get, until Ramble House put out two awesome collections "Sand's Game" and "Sand's War" both containing novels, short stories and introductions/essays and interviews. They are fabulous packages and easily picked up. It's a shame their isn't more collections as the original paperbacks are pricey as hell and hard to find to boot and there's still more to be released. You won't read a faster paced, edge of your seat book then a Sand books. There's not an once of fat on them. They may not be prime rib, more like hamburger steak but it's well cooked.

Spillane's influence on Sand that's pretty obvious. Mickey was an influence on all paperback fiction after his first book "I, the Jury." He's on the Mt. Rushmore of Paperback Authors, the biggest head smiling and holding a Miller Lite. In short, Mickey was the man. If someone asked me what deceased person I would most like to hang out with it'd be Mickey. Maybe we'd go shoot some .45's together or drink some beer. Sand and Mike Hammer would grudgingly respect each other all while keeping their hands near their shoulder holsters. Mike Hammer could be traced back to Carroll John Daly's Race Williams, the true star of "Black Mask" magazine and I would bet that Ennis Willie read some of Daly's work too. Sand, Race and Mike all live in a nightmare urban world of gunsels, dames and imminent danger. They work for themselves and say "fuck it" to the societal laws and norms. They live by their own moral code and enforce their code with deadly fury. Sand's pure pulp gussied up for the swingin' sixties with more random nude women then any pulp story would have but just as much action and thrills. 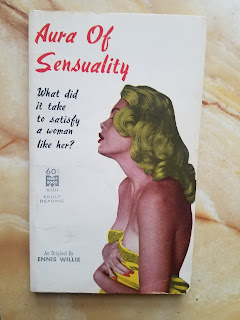 GO OUT AND BUY THE RAMBLE HOUSE BOOKS. You won't be sorry. Sand is a minor obsession of mine and its a good obsession to have. Make no mistake these are hastily written books, hammered out with NoDoz, coffee and with the rent due but that's exactly what makes them work. The speed of the writing sucks you into the speed of the world of Sand. A world where the clock is always ticking down to the next punk with a .357 who's out to kill Sand or tracking down a carny known as The Monkey Girl or the next serial killer named Sasquatch.

Yeah that's in one of the books. Sasquatch, that's great.

Posted by bloodyspicybooks at 7:30 AM