Goodnight My Love and Peeper: A Tale of Two Hyams

Peter Hyams is an interesting director; largely ignored, his films are always on cusp of greatness. Above-average fairly conventional films that are done exceedingly well. He never quite made it to the upper-level of the directors club. But he made solid movies, his take on the buddy-cop film produced two of the best examples of the genre: 1986's "Running Scared" and 1974 "Busting" both stand up extremely well have interesting action and easy-going charm. Hyams career is an odd collection of films he bounces between genres and mixes them; the outer space western "Outland," the bonkers fantasy-satire "Stay Tuned" or the action-adventure-horror film "End of Days." He is also responsible for Jean-Claude Van Damme's best movies, so points for. 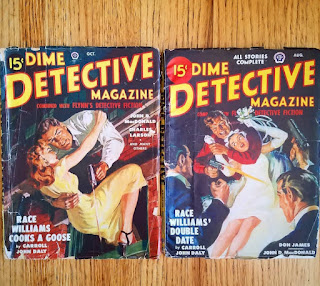 Hyams described himself as a "Chandler freak," he must be because he made two films within a few years of each other that are total love-letters to cheap detectives and film noirs. One is the TV movie that put him on the map: "Goodnight My Love." Which he followed up with "Peeper." They both rode the 70's wave of 40's nostalgia that gave us a number of great detective and crime movies. Hyams does love Raymond Chandler but Hogan, Boyle and Tucker seem like detectives straight out of Dime Detective magazine, not quite the knight that Chandler wrote about. Maybe detectives from the pens of Norbert Davis, Frank Gruber, or Merle Costiner, writers with a bit of the tongues in their cheeks. Maybe even Robert Leslie Bellem mixed in there for spice.

Get it? Spice? Bellem wrote for the Spicy pulps. God, I'm a nerd. 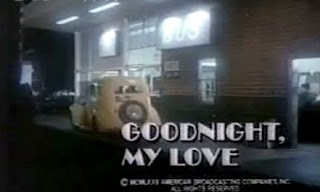 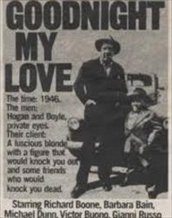 "Goodnight My Love" is the better of the two movie, even if it shows it's television roots in production, it's got that great studio-feel and recreates 1946 pretty well. I'd love to see a nice clean print of it to see how good the film looks. Hyams is also a cinematographer and a fine one, he makes good looking pictures. Sadly the old VHS rip that's on Youtube is fairly, uh, shitty. The movie works past the format. Hogan is a grouchy P.I. played by Richard Boone is sleepy and bored. Barbara Bain is gnawing on the scenery as the femme fatale that no one buys. Victor Buono made a career out of being the 60's-70's Sidney Greenstreet and he plays the 60's-70s Sidney Greenstreet. The whole film is stolen right out from all of them by Michael Dunn as Boyle, Boone's sidekick who's a dwarf and is always hungry and underestimated. It's a standard twisting missing-person's case with twists and turns and dead bodies. Boone and Dunn play off each other well, they really remind me of Frank Grubers eccentric con-men-detective-duos. Their so down-on-their luck and can't even afford a hamburger when Bain walks in with enough cash to make their mouths water. They know she's lying but, hey, money. Boone gets conked on the head a lot and mostly tries to nap. It follows the hard-luck duo through near misses at the hands of gangsters and dangerous women. It's an fantastic little film that has unjustly has fallen through the cracks. 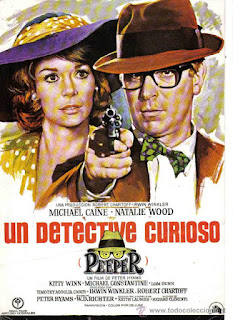 "Peeper" is the big-budget cousin to "Goodnight My Love," it mines the same territory 40's L.A. with a oddball detective at its helm. This oddball detective is the very British Michael Caine sporting glasses, bow-tie, fedora and lapping up murder and mayhem while on a (also) missing person's case. This one is leans on "The Big Sleep" fairly hard. It's based on "Deadfall" by sci-fi author Keith Laumer that was a contemporary (70s) private eye novel. Its odd that they'd time-jump a then-modern novel to make a period piece instead of just adapting an era correct book, but that's Hollywood for ya. Making things overtly complicated since day-one. The screenplay was by W.D. Ritcher of "Big Trouble in Little China" and "Buckaroo Banzai" fame and it's a lively script with a lot of wonderful ideas and set pieces in it, but it never matches up to "Goodnight My Love" in terms of execution. Caine is always great and he plays a British 40's private eye exactly like he should, his voice overs are spot on. Natalie Wood is amazingly charming as the Lauren Bacall part of the picture. David Thayer takes on the Sidney Greenstreet part in this one, Buono must have been busy. Timothy Carey and Don Calfa (in Peter Lorre mode) work great as a pair of goons out for Caine. The thing that is mostly remembered and its a stroke of genius is that the main titles are spoken aloud by a Humphrey Bogart impersonator. It sets the mood perfectly. It's a lot of fun to be hold, really only paling in comparison to what had came before.

You'd probably have to love the genre to understand the greatness in the to films, an outsider wouldn't appreciate the little details and call-backs. I wonder if Hyams has another 40's detective movie in him. I'd love to see it. It's his own shared universe. Tucker, Hogan and Boyle could probably all go watch a ballgame over beer, hot dogs and tea and get along fine. They are all cut from the same rough cloth. If there was a hundred movies that filled this universe I would watch them all. I've watched both movies a handful of times each and will continue to watch them. It strikes me as an long-gone era in this world of multi-media franchises, where studios made quirky little movies for niche audiences. It probably struck Hyams in the time that they didn't make movies like they did in the 40's and he tried his best to recreate it. He succeeded whole-heartily.
Posted by bloodyspicybooks at 1:20 PM