The Sundance Murders by Peter McCurtin 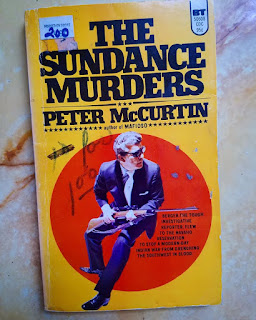 Peter McCurtin is one of the select few that get to be a real person and a house name author all in one, plus hiding behind other pseudonyms like Bruno Rossi, Frank Scarpetta, and Gene Curry among others. He wrote crime stories, tough guy vigilante books, mysteries, westerns by the bucketful, stories of hard-bitten mercenaries and they all had his clean-cut sometimes witty stamp on them. Unless of course it was someone else writing as Peter McCurtin. Then it was a crap-shoot. The fly-by-night nature of 70's publishing is part of the fun of theses books for me.Some wild shenanigans are well documented at wonderful sites like Glorious Trash and Paperback Warrior. Both fantastic excursions into the world of Paperbackdom. McCurtin himself is tied to many examples of  Men's Adventure, names like The Marksman, the Assassin, The Sharpshooter, and Solider of Fortune.

The Sundance Murders is a fun ride. Berger, a low-rent tabloid reporter who packs a snub-nose Walther P-38 goes to Arizona to find out if Native Americans are starting a revolution against the government, dressed like Ghost Dance Raiders and armed with machine guns. Along the way Berger gets in shoot-outs with Tommy Guns, drinks a lot, beds the only two women in the book and annoys all the local bigwigs. Its obviously got a lot of negative racial stuff that goes along with the story and time period, but it wasn't overly distracting to me. The racial accept of these books is a major turn-off for some people. I understand. The plot probably wouldn't fly today, but the Native American characters are all treated fairly well with the racial slurs kept to a minimum. When I read a racial or sexist line in a book like this I usually think, "Oh shit, that's just terrible," and move on, shaking my head at the attitude of the books. Casual racism and sexism pepper the books, if you can't get past it, I totally understand but I'm sorry cause your missing out on the rest which can be a lot of fun. The problem lies in that the general mainstream version of these types of books today are benign. They lack the pulpiness I crave like I crave Doritos. I want fast moving yarns filled with PULPY GOODNESS. So, I can look past the objectionable bits a little easier then most.

Berger is a fun character who's got enough sarcasm and humor to really make you root for him. I have a fondness for mysteries and action adventure books set in rural areas. The landscape pays a big part of the novel and lends itself to some fine action scenes. McCurtin wrote a lot of western books, including a great series about a badass named Carmody. This is a Western in modern dress for sure, what with the Ghost Dance Raiders and Berger the pistol-packin' stranger rolling into poke the bear. It also rest comfortably in a all but lost sub-genre of mystery fiction: the Hard-Boiled Reporter story. They read a lot like a classic private eye novel but with a touch of the tough cop novel because they usually have a boss breathing down there neck, so you get the best of both worlds. Actual Pulp examples of this are Daffy Dill by Richard Sale, Kennedy by Frederick Nebel and Flashgun Casey by George Harmon Cox. Berger would have sat right next to these characters at the bar, had a drink and spun tales.

All in all it was a swift moving story with enough twists and gore to satisfy me. I'm nearly positive Berger was supposed to be another series character for McCurtin, he knew his market and that's what it called for but its a shame that no other Berger books appeared (that I know of) cause I'd devour it. Get it? Berger? Devour?
Posted by bloodyspicybooks at 9:52 AM