Cleve F. Adams was a old school writer his series character Rex McBride is an old school too. Tough as a nickel steak (or something) and that can turn people off. 'Ol Cleve has been shoved to be a foot-note in the mystery field over time, mostly remembered for one quote: "an American Gestapo is goddamned well what we need.....The only way you can lick these guys is to fight as dirty as they do...bite and gouge and use a knee where it will do most good," in "Murder All Over" published in 1943. So, yeah, fucking harsh Rex. To be fair Rex's main character trait is being an asshole (or at least acting like it) and that's a fitting quote for his character but Rex plays it fast and loose so it may of may not be his true feelings. I don't know if Cleve Adams was a racist or whatever but it pretty much everyone was in the time frame, so there you go. That being said in all the other examples of his works I've never came up against anything that was overtly racist (I mean outside of the normal examples of the time period) so maybe Rex and Cleve have gotten a bad rap. Rex goes out of his way to say that a racial slur is over the line in one book. I guess everything in life and books is complicated. 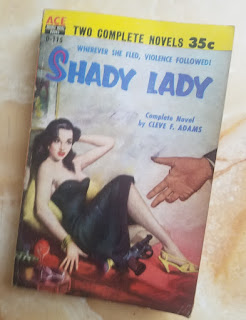 That out of the way the Cleve Adams books I've read I enjoyed. The McBride books stand up and rush to the finale, boiling over in cynical ultra-hard-boiled prose that makes you feel the dingy, sweaty, rough and tumble time-frame they were set in. "Private Eye" from 1942 in particular stands out as a fantastic "Red Harvest" riff, the tough P.I. strolling into a town and mixing it up. Primo Cleve Adams and Rex McBride is the first book, "Sabotage," that's some damned fine rut-gut reading. Dashiell Hammet's shadow looms large over Cleve. He used a lot of Hammet's plots as jumping off points and plugged his own peccadilloes in them and produced some really fun books.  As John Spain he wrote the Bill Rye series that used "The Glass Key" as its starting point. BUT Cleve has a style all his own, the stories unfold smooth as butter and keep slowly getting the tension ratcheted up. Rex is a tough guy but he's no Superman. He gets in over his head, he gets worried, he gets duped and he will fall for the wrong dame. He drinks like a fish, shoots fairly fast and has an eye for the women. Now, who could resist reading that? 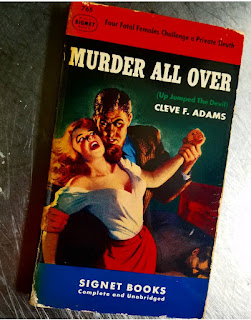 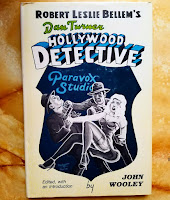 Cleve was a pulpster through and through and at the same time he was producing novels he was cranking out novelletes and shorts for the pulps. These were G-Man, private-eye and tough guy and gals stories. Being a pulpster and not letting a word go to waste some of his work is culled from shorter works."Shady Lady" is one of those. Now this book came out in 1955 in a Ace Double with a Harry Whittington novel. Cleve Adams died in 1949. Unfortunately no one was using a Quija board to stitch this book together.  The pulp-master to end all pulp-masters Robert Leslie Bellem put the book together for Cleve's wife, as the story goes. Bellem created Dan Turner, Hollywood detective and wrote scores of pulp magazines nearly by himself, including the comics! These are told in a wild, wacky, wonderful way of odd-ball slang, nearly-nude women and fisticuffs. The Dan Turner stories are a world onto themselves. An alternate dimension of screwball-hard-boiledness. It was this collaboration that made me want to read "Shady Lady," I had no idea how the two writers could mesh together. 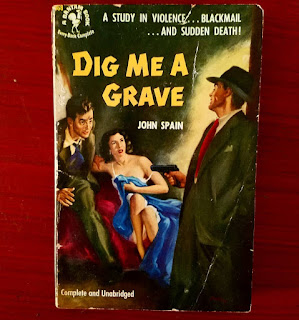 "Shady Lady" is the sixth and final Rex book, published over ten years later then the previous and sadly its a minor effort. Bellem played it straight and wrote like Cleve and Cleve was dead so it never seemed to kick into high gear. There's still passages and descriptions that prove what a good writer like Cleve (or Bellem) could do. Rex is following the shady lady of the title who has connections to a dead embezzler and uncovered money. Rex is working for the reward because he owes his bookie a lot of bread. They get to the Shady Lady's home town and get wrapped up in the local election that proves to be a hot one cause plenty of people end up dead and Rex gets blamed for a few of them. There's crooked fat sheriffs, virginal sisters, a Communist taxi-driving brother, gunmen, politicians, civic ladies and dirty little secrets. It's all fairly standard, Ace Doubles are often like that but every now and then they a totally awesome. "Negative for a Nude" by Charles Fritch is a helluva Ace Double, sadly a lot of them were cash-in jobs for disposal bargain time-wasters; that's what "Shady Lady" is: a time waster. You could waste it worse there there's still enough fun and tough antics that keep the ball rolling but it just pales in comparison to early Rex books.

Posted by bloodyspicybooks at 9:48 AM