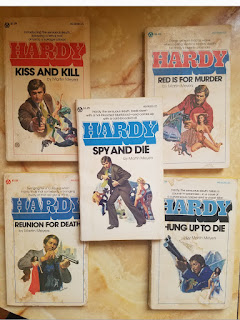 Between the Hardy books and the Hardman books I pretty much buy any books from the 70's put out by Popular Library. No doubt trying to find something that pleases me as much as these two series do. Or trying to recapture days of the my misspent youth reading them. Wait, my misspent youth was just reading musty paperbacks. Geez, nerd alert.

Patrick Hardy is a fatty who likes to eat, watch movies and read. So, he's me under a false name. He also has a big dog, a barber shop chair, VW Bug, a private eye license and an eye for the ladies. So there's differences between us, I let you figure it out. Seriously someone buy the right and cast me in the movie version.

Hardy's also a coward with a funny backstory. He was fat kind who didn't have to worry about being drafted because of his weight. Then one day he's at the wrong place at the wrong time and gets plugged in the gut and when he gets out of the hospital he's thin enough to get drafted. But he's still a coward. Enter a loopy Army plan to hypnotically train cowards to be killers when under extreme stress. It worked, Hardy can kick some ass when need be but it's all his body going on auto-pilot and it scares him shitless. Anyway the program was a bust and the Army was still probably trying to figure out that Captain America super serum so they gave up and they shipped all the guys someplace and all of them died in a accident, except Hardy. After ALL THAT he ended up being a M.P. and when he got out he set up shop in New York City as a soft-boiled private eye. Phew.

Hardy's got all that backstory. But it really doesn't amount to much in the execution of the books. They maybe a fight scene in each book where he uses his "built-in badass" feature but its over quick and doesn't amount to much and much of the leg-work and fighting comes from his actor (!) buddy Steve Mercer, with Hardy acting like a horny slacker version Nero Wolfe sitting in his barber chair petting his dog and nursing his bum knee. The rest of the books are spent with Hardy telling you what he eats, watches, reads, how he sleeps with the various women that populate the novels and how he solves whatever little mystery he's wrapped up in. Really it's a lot about sandwiches and the late show, though he gives out solid recommendations. I discovered Manning Coles excellent Tommy Hambleton spy novels from Hardy. It ran for five books, "Spy and Die" being my favorite with "Kiss and Kill" being no. 2. Contrary to the covers he never touches a gun or drives a bitchin' Firebird.
I shouldn't like these. They should be the classic case of "covers being better then book," but I LOVE them. Hardy's got a great voice and a lot of hound-dog charm about him. I'm just a narcissist and see too much of myself in him. The books are the "cozy mystery" version of a Men's Adventure novel, they are warm and welcoming into Hardy's world of lazy crime-fighting. Martin Meyers who was an actor, didn't write much more in the Men's Adventure world, instead he concentrated on writing historical mysteries with his wife as Maan Meyers. Since historical mysteries aren't my cup of rot-gut I haven't ever tried them. BUT 'ol Hardy did reappear in the 90's in a short story in "Private Eyes" edited by Max Allan Collins that shows him as older, but still the same and the again a little later in "Crime Square," edited by Robert Randisi. Sadly Meyers died in 2014 so Hardy won't be popping up again. Too bad.
Posted by bloodyspicybooks at 7:48 AM