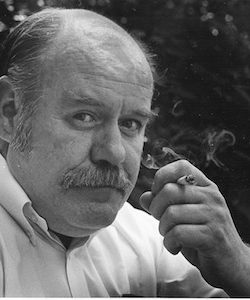 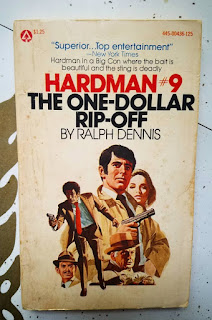 Ralph Dennis found me many years ago. I was in trouble. I loved private eye novels, but for my taste too many of them didn't pack enough punch. They didn't have real grit or well...hard men...

The world of number Men's Adventure fiction came to me via Ralph Dennis and Jim Hardman. Hump Evans was there too. They had guns, booze, chicks and problems following them. I was all in. These were real tough guys, they reminded me of the tough guys I knew in real life. Hardman had a beer gut, Hump may have played in the NFL but that didn't get him much past that. They did odd-jobs, the shit jobs that got people dead but maybe tipped the scale for the little guy too. They were tough guys but at the same time they were little guys punching up.

Jim Hardman is an ex-cop with a .38 Colt Police Positive in the closet. He likes to drink, grill, do a little gardening, get shot at and do some shooting. He's got a steady lady but he isn't too tied down and earns his dough through his rep as a guy who can get stuff done.

Hump Evans is his friend, they are close but neither of them would cop to being called buddies. They consider themselves "associates." Whereas Hardman simply does this line of work cause it's basically all he's qualified for Hump seems to do it pocket cash for spending on sweet women and some of the finer things but really Hump doesn't have any options either. His football days are past and it's the 1970's. It's a fairly forward-thinking partnership and its clear Dennis knew the racial issues he wasn't dwelling on in his books. He could just show you that two men who trust each other could do a dirty job together. Didn't matter what color their skin was.

The stories take place in Atlanta. I've only ever been to the Atlanta Airport, but I sure feel like I've walked the hot summer Georgia streets. Dennis knew his town and really knew his bars. Hump and Hardman (sounds like a comedy duo, I know) drink up the day when they are not working and when they are.  The book ooze the 70's pimps, dirty cops, drugs, killers, mobsters and hooker litter the pages. The duo aren't superheroes, hell they aren't heroes they are hard-boiled men in a hard-boiled world. I can't help but picture some small grimy picture from the 70's with Warren Oates as Hardman and Fred Williamson as Hump, would have been a helluva movie.

Though packaged like Men's Adventure and containing violent action, the books aren't mere "Executioner," stand ins. No, they are pure crime fiction, maybe if they were originally printed to reflect that Ralph Dennis would have had a bigger name and published more books. But either way the Hardman's became a cult darling of the paperback fiction world and yes it's as glamorous as it sounds. To me I was the only person who loved these books, there certainly wasn't any fanfare when I found them for cheap in a dusty used bookstore. But slowly the fire grew and people began professing their love for the books, mostly writers who counted Dennis as an influence. I count him that way too.

They hit me like only a few books ever have. They struck me like the first time I ever read "The Last Good Kiss" by James Crumley or got my first taste of Hap and Leonard from Joe R. Lansdale (a professed Hardman fan)  I burned through the books. Well, almost, I have one more book to read. I haven't read it on purpose for years, it something that clicks in my head. There was only one Hardman book in the world for me to read. I didn't think I could take not having anymore. So one sat unread. I reread but left that one, Hardman #5: Down Among the Jocks un-cracked having read the remaining. Here's a list cause you don't want to miss any, but they can certainly be read out of order.
Funny thing happened along the way to me being a weirdo and not reading ONE MORE BOOK. I joined a Facebook group, a lot of the people loved Dennis's books. One of them liked him enough t start a publishing company and spend a lot of time and effort to get these books republished. His name is Lee Goldberg and the company is Brash Books. If there's a Pulp God up there in a library in the sky Lee Goldberg is on its good side. All the books are back in print, ebooks and even audiobooks, including the rest of the Ralph Dennis library and his unpublished novels....

...and one long-lost Hardman book.