For some reason Decoy #1 called out to me from a pile of books that I bought in an eBay lot. I didn't buy the lot for this book. In fact I got two copies of this book out of two separate lots of paperbacks that I got. I have a problem. I haven't even read the books that I got the lots for. I'm a fucking weirdo. 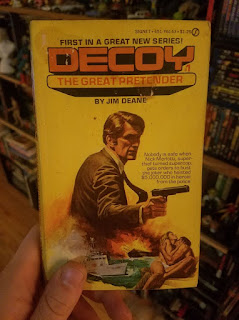 I was vaguely aware of this series and from the few reviews I had read I knew the general opinion of it was low. So, I have no idea why I just picked it up and dove in. Maybe it was the stained yellow paperback that caught my eye or Steve Holland's mid-section exploding while a boat tries to kill two people get it on in the corner. I've been to parties like that. I'm sure glad I grabbed it talk about a fun and loopy ride. It should have had a "Dr. Strangelove" title, maybe "Decoy #1: The Great Pretender or Nick Merlotti Lover of Breasts and Fucking Up Fuckers." Might be too long.

The title of Decoy is a decoy itself. Decoy doesn't call himself Decoy. I don't think the word ever appear in the text. Merlotti is called "The Great Pretender," which sounds like a child's idea of a magicians name, so I can see why Signet changed it. Though a series about a professional Decoy might have been fun, even if the job itself would probably suck. It also probably sounded good next to their "Narc" books by Marc Olden as Robert Hawkes. Either way Decoy is a nice self deprecating lead who is a master criminal on the hook by the Feds playing supercop (love that word) who packs a .45, talks about breasts and wine more the necessary, has wild hair brained schemes and who can dole out the violence when need be. He also reads Mickey Spillane books and doesn't think he quite measures up to Mike Hammer. Bu eh, no one does. I'm a sucker for characters who are readers. Gee, I wonder why. There's a line of humor that runs through the book that tells me that Jim Deane was having fun writing it. It's certainly not a dour book. You don't talk about boobies every couple of pages if your trying to write the "War and Peace" of Men's adventure novels. Or maybe you do, I'll get back to you on that.

Speaking of breasts in the 60's as a result of the James Bond craze there was a spike in humorous novels about spies that are mostly just soft-core porn books, emphasize on the "soft" the books themselves are usually pretty tame for today's standards. They had names like Coxeman, Cherry Delight, The Man from S.T.U.D., The Man from O.R.G.Y., The Lady from L.U.S.T., The Girl from B.U.S.T., Miss from S.I.S.S. It seems like I could have made a few of those up, but no they are all real. Jim Deane probably liked (or wrote, I know nothing about the author) some of these. Decoy has a vibe that these books put off, light on story but thick on female anatomy. The whole package reads like a hard-boiled version of a sexcapade book, you get all the heavy petting and a fair amount of ass-kicking.

I can totally see why others didn't care for it, its definitely not for everyone. In fact it might just be for me. Like I stated previously, I'm a weirdo but I fell for it hook-line-and-sinker and I had to order #2 instantly. There's only two books in the series so that sucks. 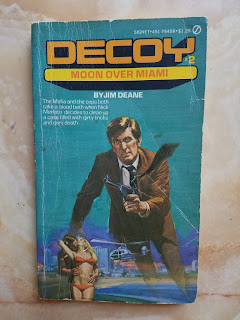 Posted by bloodyspicybooks at 12:01 PM