Phew. Man, this was a damned good book. I read about the D.C. Man books from Paperback Warrior and have been looking for them for a while. It was worth the wait. Its an expensive series to collect and I'm a cheap bastard so it took a while to track down a couple of the book. One I got in a big lot of books from eBay and the other from Etsy of all places, sometimes looking for presents for you wife REALLY pays off. Now I have zero-to-little interest in Politics so this action-adventure series about a Washington lobbyist who kicks some ass is an unlikely love but it's SO MUCH BETTER then 90% of paperback fiction I couldn't help but fall for it. 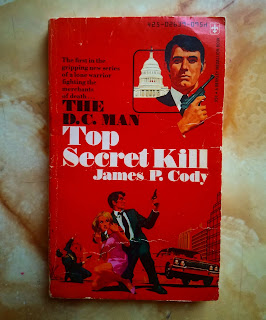 This first book had a solid set of stock of characters including a real, vulnerable yet tough main character in Brian Peterson a troubleshooter with a military intelligence background, too all the minor characters who are all well thought out and interesting. There's nice twists on stock characters, a caring yet happily married secretary is a sharp contrast to the love-lorn secretary in many private eye novels. His reporter buddy has a real drinking problem, not just the standard "hard-drinking reporter" cliche. Peterson's got a lot of friends in all walks of life, some help him out, some get killed for their trouble. The D.C. Man's world is well-hard; full of high-class prostitutes, embassy intrigue, and foreign and domestic spies. There's clear thought out violence, mystery and a nice quest for vengeance the whole package teeters nicely between all out Men's Adventure and a good crime series.

Peterson has the prerequisite for a good Men's Adventure series: A dead family. Usually it's not a big deal for one of these tough vigilantes, their family was only there in the narrative to piss him off by dying. But Peterson's families death was average, a regular way for people to die and he didn't go on a quest for vengeance. No, he fell to pieces went to the beach drank, got fat, and banged his way through a few months then returned to D.C. to resume his lobbyist career. But his heart wasn't in it and he found a niche in cleaning up dirty little messes for politicians and the like. He's a regular broken tough guy who packs a .32 revolver with a couple other guns for backups, has a cool built in wall safe, drinks his scotch with a lime and eats a lot of steaks.


I kept thinking of another book while reading this one, "Death of a Citizen" by Donald Hamilton, the first in his long running Matt Helm badass novels. It's a stone cold classic, not just in the crime/adventure/mystery category of fiction but in all of fiction. Seriously it should be read in college classes, make them a lot cooler. In "Death of a Citizen," an old spy's life is up-heaved and he has to go to work again doing dirty deeds. They both are espionage stories with a hard-boiled detective slant and characters that leap off the page. "Death of a Citizen" like "Top Secret Kill" came out of the gate as nearly perfect set-ups for a series with main characters who you wanted to follow along for years to come. Luckily, Matt Helm had a shit-load of books but sadly D.C. Man only had four. It's a shame. I haven't read the other 3 (yet) its such an interesting set-up for a series that the possibilities are endless being able to flip-flop through sub-genres. 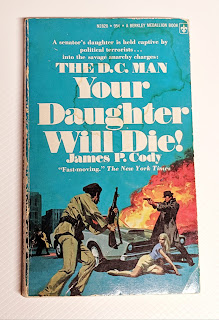 James P. Cody author of this bloody, sexy thriller was actually an ex-priest named Peter T. Rohrbach which is a fun thing to type. The discovery of backstory was handled by Paperback Warrior, I suggest you read their article cause it's all sorts of interesting. I wish Rohrbach had more badass books in him but he didn't seem to, the rest of his writing career seemed to by about history and religion.
Posted by bloodyspicybooks at 12:50 PM