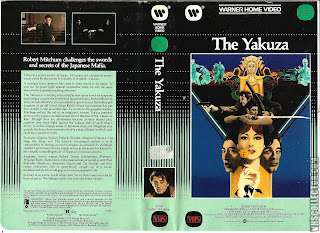 Since I've been married one of my goals is to show my wife the movies that really matter. Namely ones that star middle-aged badasses taking on The Yakuza.

The only one that fits the bill in my mind is the nearly perfect movie "The Yakuza," starring Robert Mitchum, directed by Sidney Pollack and written by a helluva trio, Paul and Leonard Schrader and Robert Towne.


Mitchum is an old-school tough-guy. He's also that in the movie. Playing ex-cop/private eye/military intelligence man Harry Kilmer who travels to Japan to save a buddies kidnapped daughter and maybe reignite an old flame from his days in Occupied Japan. Mitchum is a guy who couldn't hide his life on his face. He lived it hard and it showed, he's often remembered solely for his detached coolness. But in his later work like this and "Friends of Eddie Coyle," he showed that he be coolly detached and utterly vulnerable. Kilmer is a movie loner who's actually lonely having his love and adoptive family ripped from him all those years ago. But being Mitchum he had shoot a .45 and a double-barrel shotgun simultaneously hit the Yakuza while he is doing it.

When a lot of actors try to be stoic it comes across as dynamic as a floorboard. Ken Takakura is stoic in a way that shows his rage, anger, lust, pain and hope. He's also damned good with a samurai sword. He's shown as a "man out of time," in the movie, his code of honor and discipline being at odds with the modern world (the 70's anyway) as a man who has walked away from the Yakuza and lived to not talk about it.

The Supporting cast is full of character actors, Brian Keith is always the bomb. He could be anything you wanted and make it look like it was his day-to-day, good, bad, indifferent, not to mention doing it all in 70's plaid and cowboy hats. Richard Jordan was the perfect young buck tagging along with Mitchum. He proves himself to a man who is quick with a gun but obviously wants more from life then being a hired gun. He also wears plaid pants. Keiko Kishi is letter-perfect as a woman who has had many years to live with what her life has become and the ideas of what could still blossom from it. My wife got a kick out of Herb Edelman being in it, better known as Stan on "The Golden Girls," and here being a man in over his head but dedicated to his friends.

The bad guys are bad, the good guys are mostly good, the motivations are deep and rich and what could have been pure melodrama is reigned into a difficult love story. Pollock was a great director who mostly made fine movies. This is never really counted among those but it should have been. There will never be another movie like this.

So, why is this on a book blog? See it's really a book. It's a hard-boiled Gold Medal paperback original. It had a painted cover of a tough guy holding a Colt with a slinky dame in a kimono on his arm and the looming death of the Japanese mafia creeping around the corners. The byline was a pseudonym.

Of course it wasn't a book, though it did have a tie-in book written by co-screen writer Leonard Schrader but it was spiritually a pulp paperback novel. Arms get chopped off, your buddy has an arsenal for you to pick your hardware up from, and the mobs on your tail. But it's too deep to just be an action movie but goes by fast enough not to get bogged down in "feelings," a waste of your breath to talk it all out, no just look at the man you've hated for 20 years and then go risk your life for him. Its a movie about destruction. Not just property destruction, but personal destruction. Destruction is what Gold Medal Paperbacks were about. Going too far and never being able to take it back.
Posted by bloodyspicybooks at 11:20 AM