Pepperoni Hero #1: Sandwiches are Not My Business by Bill Kelly

I don't know what this novel is. I don't think Bill Kelly knew what this novel was. It's too funny to be a straight novel, too hard-boiled to be a spoof, it's lays in the middle in a grey area of goofiness and danger. 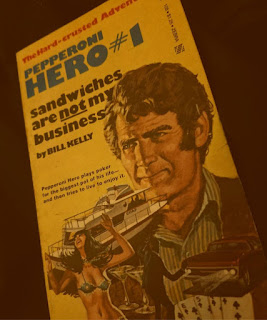 Pepperoni Hero (yes, real name) is a "adventurer" maybe? I dunno, he's a guy who knows shady people and does shady things for cash. He's a Chicago Travis McGee by way of the Marx Brothers. He's got the houseboat (in Chicago!) and the requisite army badass backstory. He drink gin and sexes on a LOT of ladies. Again, Pepperoni Hero is his real name, I can't get over that. I LOVE THAT SO MUCH. I want to own a sandwich shop called "Pepperoni Heroes" and grace it's walls with the lovely artwork of this three-book series.


The series was put out by Zebra Books which put out some of the oddest examples of Men's Adventure fiction. Jerry La Plante's "Chameleon," Robert Franklin Murphy's "The Girl Factory," "Big Brain" by Gary Brandner were all oddballs on the shelf. Most of their series didn't last over three books, that is until you get to some of Jerry Ahern's output. But Zebra did one thing right, theses has some of the coolest 70's covers ever put in print. 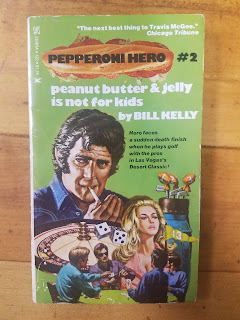 Okay, so Pep can gamble like a madman and an old army buddy wants him to gamble with an evil brother-in-law to clean him out...for some reason. This is the plot of the novel. In order to get to the plot you read through tons of backstory and little side-missions that Pep has done. Most of these are more interesting then the novel. It's almost a Mosaic novel about Pep, it kinda of darts too and fro relating sexual escapades and ass-kickery. Then it ends, sorta but it sets up the next book Pepperoni Hero #2. 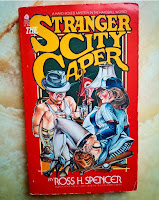 The book reminded me of Ross H. Spencer's novels of drunken stumble-bum private eyes, those two have a loose narrative and you ride along with them for the humor and the characters. They had funny names too: Chance Purdue, Lacey Lockington, Birch Kirby, etc. etc. Later I got the Pepperoni Hero vibe from "Decoy #1: The Great Pretender" by Jim Deane, rambling, sexy and goofy. Maybe if you like Warren Murphy's Digger/Trace books you might like it too, but that's a stretch if you're picky.

All that makes it sound like a bad novel, huh?

I don't know if it is. Bill Kelly could write. If he wanted to write a novel that reads like a drunk man is recounting his life to you over gin in a seedy bar, he damn-straight wrote that book. If he was doing it as a joke on the reading public, he sure did that too. Or maybe he just tossed off a book for fun after reading a bunch of John D. MacDonald and this is what he ended up with, it got published and he wrote two more. The world may never know. It's not a book for everyone, in fact I'm sure I'm in the VERY small minority that would even consider picking up #2 after reading it. But I did. I have the whole series. How cool am I?

Posted by bloodyspicybooks at 9:31 AM