A Run in Diamonds by Alex Saxon (Bill Prozini)

Bill Pronzini, noted mystery writer who's "Nameless" Private Detective novels are legendary. I read a score of them when I was in my teens, at the time (also now) I looked for tough action packed books that would thrill me. The Nameless (so called because Mr. Pronzini purposely didn't give the character a name) books aren't that at all. They are quite and beautifully written down-to-earth stories of a regular beer-drinking schmo who collects old Pulps and solves mysteries.  They really are top-shelve books and the series has run consecutively since the 70's. No small feat. AND they still thrilled me.

Back in the 70's he got hired to start a Men's Adventure series about a badass named Carmody who hires himself out to badass things like body-guarding, black marketing and such. He's a true hard-case, very much in the mold of a character who would have been splashed across the pages of "Black Mask." In fact, when I read this I kept thinking of Raoul Whitfield's Jo Gar, a detective in Malina who appeared in that pulp. There's no real easy comparisons between the two characters other then being tough guys in exotic ports, since Carmody's beat is Majorca. But they spiritual connection was there for me. Or maybe I just got Pulps on the brain. Either way I like these types of stories, they are sort of like a good spy story but without a lot the governmental agency hang-ups that can slow down a story about shootin' bad-dudes and scoring with gorgeous women.

Basically it goes like this Carmody gets screwed on a diamond deal and goes out for revenge with only his wits and a Beretta. All of this is told in Pronzini's typical clean style. The action is well handled and brutal. Its really a damned shame that this wasn't a long running series, it has a nice pliable central character who's morally ambiguous and could get wrapped up in all sorts of a nasty schemes only to fight his way out. It could have avoided a stagnation of plots that appear in other series such as "kill a bunch of mobsters, then later killed a bunch of mobsters."

A lot of Men's Adventure books are simply "hack work," there I said it; lazily and quickly written for a buck. Sometimes that can be its own magic and sometimes it's just shit. Others are writers still honing their craft and learning as they go. Then there's good authors doing good work in a genre that they actually seem to appreciate. Bill Pronzini is too much a writer to write hack work. The world of Carmody is instantly colorful and as real as an action book can feel. Obviously there's not a lot of deep-thinking and self-analyzing. THANK GOD. But the novel moves, makes sense and provides a lot of entertainment in a short page count. Exactly what I want. 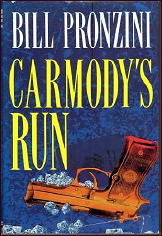 Carmody appeared in a few short stories as well in digest around the same time and in the 90's everything that had Carmody in it was republished as "Carmody's Run" by Bill Pronzini. It had all the short stories and a shortened version of the novel, as Mr. Pronzini states in the introduction that he was a little embarrassed about his earlier writing and "cleaned it up." That's the version of the novel I read and it's lean and mean. I need to track down the original paperback and give it a read to compare. I see some mention of a book from 1999 called "The Dying Time," credited to Pronzini as Alex Saxon, but can't seem to find any other info on it. Maybe there's a lost Carmody floating out there.

Mr. Pronzini has a few A.K.A. works including a nice two-book series about a pilot named Dan Connell who gets into frays and then has to extricate himself out of. He wrote these as Jack Foxx, "The Jade Figurine" and "Dead Run," both eventually published under his own name. They read like nice old B-Movies of the 30's, 40's and 50's adventures in the South Seas with crooks, dangerous dames and killers lurking about. Equally as good is a book called "Day of the Moon" he wrote with Jeffery Wallmann about a fixer/detective for the mob named Flagg. It runs along the same lines as say a Parker novel by Richard Stark or a Quarry book by Max Allan Collins. He's also wrote a bunch of westerns and stand-alone books, if his name's on a book it's a safe bet that it'll be good.
Posted by bloodyspicybooks at 10:52 AM