You make a movie about hard-bitten mercenaries and I'm there. You make those hard-bitten mercenaries Rod Taylor and Jim Brown? Whew. I'm in hog-heaven. My love of James Bond led me to 1978's "Wild Geese" starring the then Bond Roger Moore with Richard Harris and Richard Burton, that's one of my top-ten movies of all time and it paved the way for me to watch about anything about mercenaries with titles like "The Professionals," "The General Died at Dawn," "Dogs of War," "Men of War," "The Last Grenade," "Professional Soldier," and so on. I knew of "Dark of the Sun" for years but it alluded me. Shame on me. 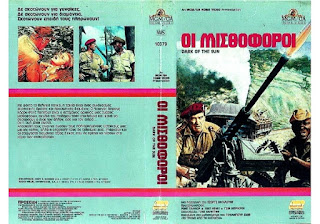 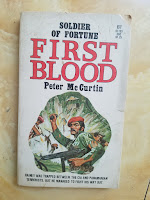 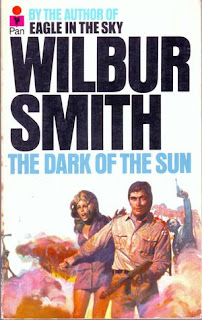 Now, I'm not getting the morals of being a professional solider i.e: murder for hire basically. Throughout history there has always been a demand for them, so that's on human nature.  I enjoy mercenary fiction for the same reason I prefer private eye fiction to say a police procedural: being anti-establishment stories about the outsiders and underdogs fighting cash and maybe what's right along the way appeal to me. In the actual mechanics of the writing they usually fall into the "men on a mission" category of war-fiction which is a nice combination of a spy adventure and a war tale. You may not know who the heroes can trust, they get shot at from both sides of the conflict, double-crosses are abound, everything that can go wrong will and at least one of the characters will doubt their allegiance to the all-mighty dollar and might just do the right thing. It's all good stuff. Alistair MacLean is the father of the modern version of this type of story though he never really wrote a soldier of fortune tale, but books of high adventure like "Where Eagles Dare" and "The Guns of Navarone" certainly set the tone for most stories of professional soldiers. Besides that real-life merc and charted accountant Michael "Mad Mike" Hoare published a memoir in the late 60's called  "Congo Mercenary," and popularized the interest in the profession anew.  In the 70's through the 80's there were a few Men's Adventure series built on men in these professions like the amazing John Benteen Fargo books, Peter McCurtin's badass Soldier of Fortune, Jerry Ahern (as Alex Kilgore) kick-ass They Call Me Mercenary, Peter Buck's Mercenary, Peter Leslie's Soldier of Fortune etc. etc. Wilbur Smith wrote in the High-Adventure mold, while I haven't read "Dark of the Sun" the few that I have read a very good examples of the genre. 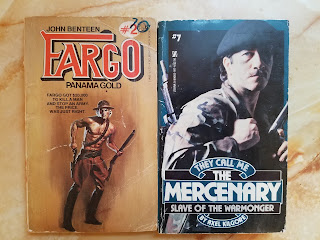 Rod Taylor is a badass mercenary hired to built a train with his buddy Jim Brown to go down deep into enemy terrority and save stranded townspeople...sorta mostly they have been hired to retrieve an ass-load of mined diamonds for a Dutch company. And yeah, sure they say, save the people along the way. To do this they have an old Nazi tagging along, a drunk doctor, .50 machine guns mounted on the train, and an army regiment. Jim Brown has morals he cares about the country because he was born there but raised and taught in America. Rod Taylor is a merc through and through, he's in it for a payday and maybe a little action from Yvette Mimieux who got picked up along the way. The old Nazi is a dick who wants the diamonds for himself 'natch. Kenneth More is the drunken doctor bringing more to the part then was probably necessary but he was an old school pro and his part reflects it. Jim Brown is the moral compass of the movie and it's a part he plays well he exudes confidence, and righteousness. You know Jim Brown will always do what his morals dictate. It's a hard part to nail but he does it with ease. Rod Taylor was always a little better actor then you'd think he'd be; being that he was pure beefcake.  Rod was made for these kinds of parts and he really moved hard into action pictures after this one. He could have played most any paperback hero of the era. In fact he's the big-screen's only Travis McGee in "Darker than Amber," and Boyise Oakes in "The Liquidator," that's range folks! Plus he's who I picture when I read a Doc Savage. Taylor and Brown play off each other well with a natural unspoken macho-man friendship that anchors the film.

This must have been a shocker of a picture in '68 it's brutal and hard-boiled in a way so few movies are. I mean there's a chainsaw fight. But the truly unsettling scenes of the rape and pillage of a town that our leads have failed to save is shocking fifty years later. I know very little about the actual conflict that is fictionalized in the movie so I cannot comment on the factual basis but it's unsettling in the film. The action is of the old Hollywood two-fisted variety in the film is handled very well, lots of jumping from tall things onto various moving vehicles, heavy machine guns blast at fighter planes that strive the train, and bloody fist fights lead into chainsaw fights. Jack Cardiff was mostly a cinematographer (he lensed "The African Queen" for one) and it shows. It's a nice looking picture. Unfortunately it's not perfect the Yvette Mimieux sub-plot is forced and doesn't really go anywhere. Kenneth More's character is sorta tacked on as well and there's a bit of slog in the middle of the picture. In the hands of say Robert Aldrich, Don Siegel or J. Lee Thompson it would have been a stone-cold classic war movie, but as it stands its just a perfect little cult-type film. The problems are not out-weighed by the great stuff in it, it's a real exploding roller coaster ride of a movie. It's not quite up there with "Wild Geese" for me but it's top-tier soldier of fortune action.
Posted by bloodyspicybooks at 11:19 AM