Manor Books never hit the big time. They had a few Men's Adventure series that are worth noting,  Andrew Sugar's bat-shit crazy Enforcer, Keller by Neslon De Mille (before his name took up more space on a book's cover then art) others with names like Aquanauts,  Bronson, Kill-Squad, Kung-Fu Featuring Mace, Nookie, Mondo, etc. etc. But along the way they published the first novels of James Reasoner and Stephen Mertz (writing as Stephen Brett) both are old-school private eye novels of a the highest quality. Both authors have had good careers in books with numbers on them, Mertz in the Bolan world, plus M.I.A. Hunter and others. Reasoner in westerns mostly with series like Longarm and Trailsman. Its clear they both love their private eyes though, both books are great tributes to the characters that came before but yet build on the concept of "one man vs. them all" that is the central theme of detective fiction and put it through the lens of their respective times and places. 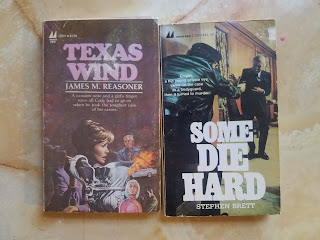 "Texas Wind" is the best Mike Shayne novel ever written, but of course it's not it being the only novel-length appearance of Cody a Fort Worth private investigator. I couldn't help comparing the two as Cody and Shayne are some of the best representations of the classic version of the American Private Detective out there. I think Mr. Reasoner will appreciate the Shayne reference (if he ever reads this, yeah right!) as he cut his teeth writing Shayne some of the best novelettes for Mike Shayne Mystery magazine and has an affection for the character. Shayne has gotten the tag of "generic P.I." which is unfair in my opinion as Shayne lives in a clearly written world and he himself is fairly different in setting, temperament and habits then the cliched detective, that being said Shayne was ghost written and after a while the edges of his character were smoothed away. In a lot of ways Cody is a generic P.I. on the surface, a loner with an answering service, freshly bought Remington prints for his office, .38 and a sense of right and wrong. In lesser hands the book wouldn't be as FANTASTIC as it is. Cody pounds pavement, asks question, sinks his teeth into a case about missing college student and doesn't let go. Along the way he tangles with mafioso, gets beaten, shot at and at one point has a severed finger in his glove box. Cody is Shayne with sharp edges and a breath of excited first-novel writing that is sometimes magical.

"Some Die Hard" is about Rock Dugan (GREAT NAME) a colorful Denver-based hip 70's detective trying to figure out a flying locked room mystery. Dugan's a right tough guy with a .44 magnum, a stunt-man background and a love for books. Right after you meet Dugan he's reading a Perry Mason. I love things like in books. Influences on your sleeve. Dugan has to solve the death of a man who went up in a sailplane only to come down in it dead with a knife in his chest. Probably the only locked-sailplane mystery ever. Dugan's story has the hallmarks of a classic Gold Medal private eye paperback, crooked cops, the mob, rich evil people, etc. etc. But I got the Mike Shayne vibe from it as well. See back in the early Shayne days when eye-patched David Dresser (it makes a cool author photo) was still writing them Shayne had the hard-boiled "Black Mask" edge to him tempered by a bit of the screwball and a bit of the "classic detection/locked-room" bit; i.e. gathering the suspects into a room at the end of the book and verbally spewing the tale of his investigation until the killer was apparent.  This is a humdinger of hard-boiled tale that twists and fires on all .44 cylinders. Plus it's dedicated to Don Pendleton of  "The Executioner" fame. Super side-note: Pendleton wrote a awesome P.I. series of his own about Joe Copp, so add those to your list too. 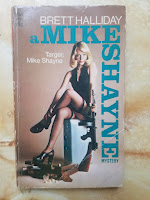 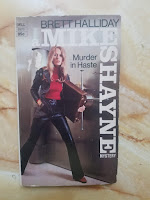 Both writers have spoken about how Manor was a screwy place to write for so that probably killed the chance of Cody or Dugan appearing in other books, much to my chagrin. Cody did appear in some short stories in various places (including, you guessed in Mike Shayne Mystery Magazine) they were all collected in "Fort Worth Nights," and it along with "Texas Wind," is readily available in paperback and ebook. Though Dugan was one-and-done, Stephen Mertz does now have a series set in the 70's about a tough-guy private eye named Kilroy that can be seen as a spiritual successor to Dugan. That's a terrific series, lean and mean detective stories that a few-and-far between these days. "Some Die Hard" and the Kilroy books are all in paperback and ebook too. So, you can have a lot of quality writing at your bloody little fingers pretty quick. The original paperback of "Texas Wind" and "Some Die Hard" aren't readily available. "Texas Wind" in particular is a pricey book, I got lucky when I picked mine up from one of the massive online booksellers, I rolled the dice on a no picture Amazon listing and came up lucky. It only took like fifteen years of looking. Yeah, man I lead a life worth living.
Posted by bloodyspicybooks at 10:57 AM