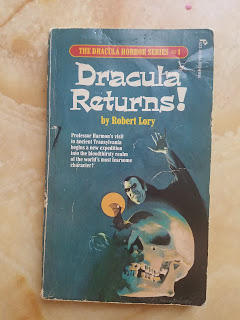 Lyle Kenyon Engel was an idea man. A book idea man. Without him we wouldn't have Nick Carter, the Killmaster version anyway, nor would we have John Eagle: Expediator, Don Miles, The Baroness, John Jake's bloated Kent Family Chronicles, Chopper Cop, the list goes on. He was a paperback salesman who "packaged" ideas for (hopefully) long running series's of books written primarily by ghost-writers.  It was a good deal and produced some of the most fun and varied lines of paperback pulp of the 60's and 70's.

Robert Lory was a fine writer working on John Eagle books. The Eagle books read like a grown up "Jonny Quest" globe-trotting, gadgets, over-the-top villains, super-suits, cyborg yetis's; you know the good stuff. It's a very strong violent take on the "Doc Savage school of pulp. Lory's entries are particularly strong, but stalwart pulp writer Manning Lee Stokes and Paul Eiden do great work with it as well. 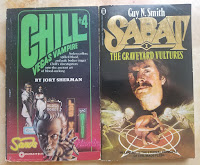 Along the way Engel decided he wanted a Dracula series. It makes sense Old Dracula really got around in the 70's in comics, TV, and films so it only seemed fitting for his adventures to continue only this time as a roguish evil-doer anti-hero. Plus horror/occult-themed paperback were on the rise, Guy N. Smith's Sabat books, Michael Avallone's Satan Sleuth, Jory Sherman's Chill and "The Night Stalker" had invaded the television. Even Frankenstein had "The Frankenstein Horror Series" which is sadly a Hodge-podge series of non-connected books, not the continuing adventures of Frankie. Anyway Engel turned to Lory who jumped at the chance. The first of the series is simple titled "Dracula Returns" and it's a corker.

'Ol Drac had some bad luck and ended up with a stake in the heart and a nap in his tomb. Professor Harmon is a wheel-chair bound former cop who gets an offer he can't refuse from Ktara a shape-shifting witch who like this Dracula actually comes from Atlantis. So, along with his strong-man also ex-cop assistant Sanchez they go off and resurrect Dracula with their own reasons. But Dracula needs to be a fly on a string, controlled to be useful to the mysterious Harmon. That's a problem. The Solution? A tiny stake that is implanted by Dracula's heart. The trigger to fire the stake? Harmon's psychic powers. Simple as that really. Then they are off to the races over 9 books, finding lost civilizations to fighting voodoo zombies, Dracula kept busy for a few years...Dracula, Atlantis, psychic powers, sexy witches, numbers on the covers, thrills, chills and gore. This might be the most 70's books series published. 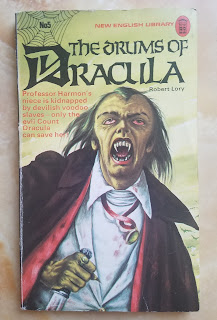 All good "packaged" book series have to start somewhere and "Dracula Returns" acts very much like the set-up to the punch line. I find myself sometimes skipping the first book in these types of series because they can get bogged down in the world building and they usually re-cap the first book in the each following volume. While this one does have a lot of information to get out it does it fairly smoothly, but he plot suffers from all the set-up, it's about the mob and its almost instantly forgotten. Good news is you didn't pick this book to read about the mafia, they are just there to be cannon-fodder anyway so Lory gives you plenty of Transylvania and Drac's "feedings" along with tough dialog and some real fun verbal face-offs between the stoic Harmon and tired and annoyed Dracula who is just bidding his time until he can figure out how to kill Harmon and get away with it. It was fairly ahead of its time for how popular these types of fantasy/adventure books are popular now, in the wake of "The Dresden Files" by Jim Butcher; though sadly most of them are fairly bland like many books these days. The edges sanded off into a round lump of uninteresting. I guess I'm saying this books has fangs, snicker. 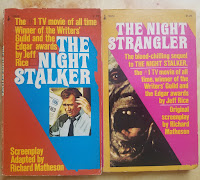 Harmon and Sanchez are great crime-busting team and probably could have headlined their own series. They got a little Nero Wolfe/Archie Goodwin vibe going on but trashier. Ktara is cool and mysterious and the shape-shifting provides some cool moments. Dracula is the star though and it's a good interpretation, though he could be in the book more. He was very "off-stage" for a lot of the novel, something hopefully the rest of the books fix. Its easy to imagine Christopher Lee (the one-true Drac) speaking the dialog. These books would have made a fine series of B-movies for Hammer or a nice weekly series maybe coming on right after "The Incredible Hulk" or spun off from aforementioned "Night Stalker."

Around the same time Marvel Comics were publishing their own tales of Dracula in "Tomb of Dracula," the birthplace of Blade, The Vampire Slayer. Once Marv Wolfman gets on the book it's a fun and funky take on the legend of Dracula with a team of Van Helsing/Harker/Dracula decedents, vampire P.I.'s, and badass slayers like Blade constantly trying to kill Dracula himself. I wholeheartedly recommend these comics. I don't think the comics influenced the books or vise-versa. It's just one of those aligning of the stars that produces two pop-culture entities that are similar at the same time. And a lot of these paperback series's of the era were pretty much just dirtier comic books without pictures.

Lory's Dracula series was a wonderful wild take on the Dracula mythos that firmly put his own stamp on it and enough distance to Stoker's original book that I think even the most hardcore Dracula fans can enjoy it. This like everything I seem to review here are fairly hard to come by and command higher prices then I'd like. Or maybe not, as I really love the hunt of tracking these books down. The books are worth it if you were a monster kid turned old, like me. I look forward to the next installment "The Hand of Dracula," where he basically faces off with the Manson Family, so I hear. 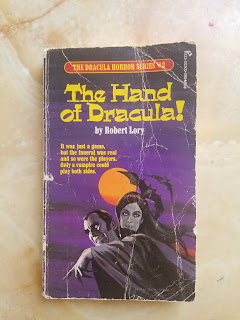 Posted by bloodyspicybooks at 9:06 AM