For Everyone's Eyes Only: Bond in Short Form

Ian Fleming's James Bond has left a huge stamp on my life. After seeing 1995's "Goldeneye" in the theater my love of super secret agents was firmly ignited. I wanted more and I dove deep. There was more movies? I rushed to Blockbuster (dating myself) and found myself discovering Sean, Roger, Timothy and even George. There were James Bond books? I dove in. Past the character I found out about Leslie Charteris "The Saint" via Roger's show. "The Man From U.N.C.L.E?" I'm there. Hundred of hardback and paperback hero-spies later eventually it led me to the spawn of Bond, the Men's Adventure paperbacks.

I'm at the point now where my young adult readings of the Ian Fleming have dulled with age. They aren't clear in my mind, save a few that I have listen on audio book. It's time for a reread of the novels. But there was a bit of unread Fleming I had never experienced: the short stories, collected in "For Your Eyes Only" and "Octopussy." The slim paperbacks have sat unread on various shelves of mine for years mostly likely because I didn't want the party to end. The various continuation novels for James Bond are a mixed bag. Kingsley Amis's almost scratched the itch, it's certainly the top of the heap. John Gardner's work was strong sometimes and then very weak a lot of the time but his Boysie Oakes books are absolutely BRILLIANT. I fear his heart wasn't always in it. Raymond Benson straddled the line of movie/book very well, they seemed like novelizations to unmade films. The smattering of "modern" authors that try their hands at Bond has also left me cold. I didn't finish Sebastian Faulks or William Boyd efforts, literary authors produce poor escapist-ism which is what Bond ultimately is. Jeffery Deaver's didn't interested me in the least. I will have to try Anthony Horowitz's take on Bond, as I have read and immensely enjoyed the first of his Alex Rider books. I would have been absolutely obsessed with them if I was a middle schooler when I read it, but as an adult it still pack a good old-fashioned punch. I  So, before my toe dips into rereading (something I VERY rarely do) I figured I should finish what I started many years ago. The two books came to my coffee table where I have bounced between the two. 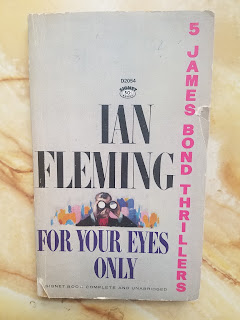 The starter story in "From a View to a Kill" is near perfect distilled Fleming. The hallmarks are present, food and drink talk, feisty (though not funny named) women, the hints of real-life espionage blended with the absolute fantastical villainy and of course the well researched locales. Bond is wasting time thinking about the perfect day drink in Paris after a botched job and gets involved with a mysterious murder of a motorcycle dispatch rider with secret papers. Along the way he meets a crazy-driving .22 packing station agent named Mary. Along the way he poses a dispatcher rider giving us a little motorcycle talk, has some action with his fists and his "long barrelled Army .45" and sieges a hidden base brilliantly disguised. All this is in 23 pages, the short page count only hinders one aspect of the brilliance of Fleming: his villains. There's indefinable ones here, simply "evil agents." It's not too much of a knock, the things moves along too quickly for you to notice too much. No part of Roger Moore's "View To a Kill" pulls anything from this short. No Grace Jones in sight.

I do think Fleming grew tired of Bond but understood it was his cash-cow to milk. Bond changed as a character as Fleming grew older, the vigor ran low. The Bond of "Moonraker" is not quite the Bond of "You Only Live Twice." I prefer the earlier pulpier stuff, but the later more literary Bond's are surely better books, I just have skewed taste-buds. Any-who, the title cut to "Octopussy" is light on Bond, he stands around and basically listens to a story. It's a find story that sweeps right to a very Fleming ending but it probably would have been stronger as a standalone tale. Bond is basically playing the policeman part of the story coming to bring someone in. It's an awkward fit. It did give me a lust for a Fleming series of Scotland Yard mystery/adventures. Nearly all of his literary output is comprised of Bond it would have been interesting to have had a stand-alone or another series character to compare to OO7. A more hard-boiled detective operating a near-Bond world of evil masterminds and global conspiracies would have been killer, all wrapped in nice Pan paperback covers? Good gravy, one can dream. 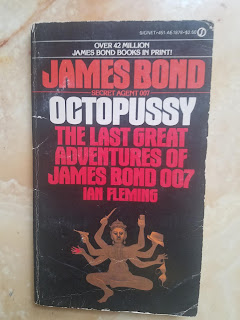 The film version  of "The Living Daylights" is one of my favorites, the short story in "Octopussy" is
also one of my favorites. I do believe I read it a million years ago, but I could have just been experiencing flashbacks from the film as it's fairly faithfully recreated as the pre-title sequence. It's the strongest entry in this collection. Bond is sent to Berlin to act as a counter-sniper to protect a defection. It's a few days spent in Berlin and restless nights waiting for the moment of action. Bond of course sends it eating eggs, drinking and wandering. He also reads "Verderbt, Verdammt, Verraten" a fictional German pulp novel with a half naked woman on the cover, which is about the trials and horrible tribulations of a German woman. It's a nice parallel to the female character in the short, which we learn absolutely nothing about but would have had a hard-go of it because of her circumstances. The story builds into a fine piece of action and we see Bond being as temperamental as ever, cursing his rank and the stuffed shirt the service stuck him with as a sniper spotter.

"The Hildebrand Rarity" is a tight nautical noir of a James Bond story. I enjoyed it but it didn't scream James Bond to me. Bond ends up on the yacht of Milton Krest (the name popped up in the film "License to Kill, gotta squeeze every drop out) and gets entangled in murder. Not really wanting to get himself involved with an investigation Bond does a little evidence tampering then sails off with the dead man's wife who may have killed him. That's the most Bond thing to do. A lot of these stories just feel like the pre-title sequence or a chunk of the middle of a Bond movie, they make you wonder about the rest of the story. That's damned fine short tale telling, Fleming paints broad pictures with short word counts.

I'm going to save "For You Eyes Only," "Risico," "Property of a Lady" and "Quantum of Solace" for another time. Oh, I'll get "OO7 in New York" out of the way real quick here at the end. Bond's in New York to tell a agent that her boyfriend's bad news bears and his recipe for scrambled eggs is actually pretty good. The story is super short and actually fairly humorous. Fleming was a guy who could write. The Bond shorts aren't going to change your life, they are pretty much only there for when you've ran through all the books and don't want to touch a Gardner. None of them are objectionable, they may be forgettable which is worse. Fleming was better in long form when he could take his time and talk about what people should eat and wear and have all the deformed villains he could ever want.


Posted by bloodyspicybooks at 2:53 PM