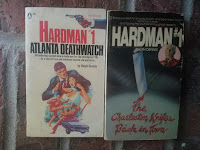 My memory is fuzzy. Jim Hardman and Hump Evans either found their way onto my bookshelf with a blind purchase of a gaudy paperback or I might have stumbled onto them via Thrilling Detective either one is possible. I was a teenager and reading private eye novels which I had developed a Jones for after getting hooked on Joe R. Lansdale's Hap Collins and Leonard Pines novels through his horror fiction. Hap and Leonard pressed their world views into my brain, they became a personal thing, tough guys who stood up for things and bantered like an old married couple. Hap and Leonard sent me looking for more and more and suddenly I was in a flame red El Camino between Montana and Texas with a Vietnam Vet named C.W. Sughrue ("Sug as in sugar and rue as in 'rue the goddamned day'") and the road was full of dirty wit, shocking  violence and deep sadness. I knew I wanted to be a writer then. I have a lot of writers that I like, some mean a whole hell of a lot including the oft quoted "Holy Trinity" of mystery writers: Raymond Chandler, Dashiell Hammett and Ross MacDonald (though Mickey Spillane is much higher on my list then MacDonald) but they weren't my personal "Holy Trinity." The three guys I'd pick are Lansdale, Crumley and Ralph Dennis.

Ralph Dennis didn't have the luck the other two and some of everything is luck. Dennis wrote his Hardman books with Popular Library a mid-level publishing outfit. Not Pinnacle or Gold Medal, but usually a bit above some of the other paperback places. They didn't set the world on fire but he must have burned through type writers cause he wrote 12 of them in three years or so. More importantly they are each a hard bitten little diamond in the Atlanta rough.  Dennis knew he was writing pulp, there's enough ass-kicking and gun-fights to keep anyone interested but the characters are a lot deeper then their kinda silly named suggests. Hardman and Hump always makes my wife giggle. Hump and Hardman's relationship; a white pudgy ex-cop and a black former NFL player in the South in the 70's was certainly not the norm. Dennis was ahead of the curve and there's less of the usual racist and sexist stuff in the books then the average Men's Adventure tales. Partly cause they aren't Men's Adventure, they are simply crime tales with a lot of action and thrills. Hump and Hardman grow closer and become the only family either of them has that fully understands. Not that they'd say that to each other. They show it to each other in their actions and these a hard-drinkin' 70's men who wear their emotions buried deep in their heart. 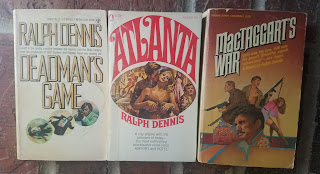 After 12 Hardman's Dennis wanted to break away from the character. That's understandable, that's a lot of writing and he wanted that hardback life and some respect that he deserved. He didn't really make it. He wrote other books and the world remained unlit, so flame-less that they stopped getting published. The years passed and Hardman and Hump seemed to be forgotten. I never thought anyone else really loved them the way I did. Boy, I was wrong.

Lee Goldberg, a hell of a writer his-own-self did the Paperback God's good work and did that long play to get Hardman republished by his Brash Books, who reprint a lot of the good stuff. Eventually there was the unpublished books, a sequel to "Deadman's Game," a ultra-hard-boiled spy novel, another espionage tale "The Spy in the Box," and a standalone mystery called "Dust in the Heart." And in a twisting mystery tale of it's own (I won't spoil it, buy the damned book and read the afterword when you're done) a book called "The Polish Wife," which became "All Kinds of Ugly," the damned-near lost final Hardman novel. 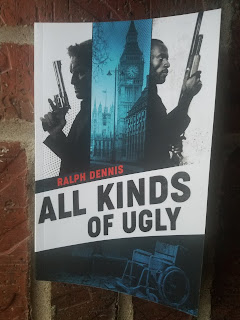 It was a long work week. A week of shiftless reading, the kind where you pick up books and they don't grab you. Honestly I had bee avoiding the final Hardman, that'd be a special occasion, like a expensive bottle of whisky. Though, I had finally gotten around to buying the paperback so it was in my house lurking and calling my name from the shelf. It found it's way to my armchair and there was a bottle of beer on the upturned plastic wooden barrel I keep beside it for remotes. Then BOOM! I'm halfway through the book and two beers in.

Hardman goes to London to find a rich kid and escape his romantic problems. Marcy one of the only reoccurring characters in the books has left him and multiple beers at George's Deli haven't helped. Maybe a little work will and change of local. That's the jumping off point and Hardman meets the Polish wife of the would be title and gets buried neck-deep into a rich families problems. There's murders and tough-guy scenes, a lot of local color and a man who's growing older and sadder and doesn't think things are going to work out the way he wanted. The action starts in Atlanta and then moves to London. I didn't know what I'd think about Hardman in a different locale, so much of Hardman IS Atlanta, but my doubts all faded away. Hardman just drank in pubs instead of bars and his nose still got stuck in places it shouldn't. Hardman quickly finds the missing guy dead and is back in Atlanta with the Polish Wife in tow. There's echos of Ross MacDonald's Archer in the probing of the family but it's ultimately not about the rich family and a dash of classical "locked room" mystery even if it's in a horse stable instead of the parlor. It's about Hardman and the Polish Wife both brutally scrambling for what they want and knowing its the last shot they will ever have. The Polish Wife herself is a interesting and fairly likeable and relatable real human version of the "femme fatale."  You understand exactly why she does what she does and falls the way she falls. That's the beauty of Dennis's writing: pulp with real people. Everybody is someone you know, know of or don't want to know.

And in one evening, barely moving from my chair with four beers drank; the book was done. The last Hardman was read and that sure is something. 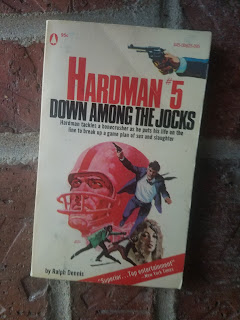 Maybe it wouldn't mean as much without the benefit of the previous twelve books but it's an ending and you should probably read it last. It's not as action-orientated as some of the other books and there's a little bit too little Hump (isn't there always?) but it's a full-blown miracle that it exists. So, Lee Goldberg will have my eternal thanks, all of Ralph Dennis's library is easily purchased in paperback or ebook from Brash Books. The Hardman books are some of the finest examples of crime fiction in the 70's and finally some light it getting shown on them and it's about good-god-damned time.
Posted by bloodyspicybooks at 9:03 AM