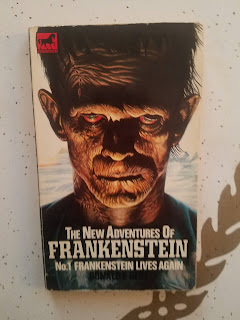 Unlike Popular Library's "Frankenstein Horror Series" this 70's paperback Frankenstein series, actually stars Frankenstein. And yes, I'm going to call the monster Frankenstein cause that part of my brain stayed ten-years-old. Any-who, monster-fan, filmmaker, and writer of books, comics, TV and movies Donald F. Glut took up the mantle to tell a absolutely buckets of fun Frankenstein pulp novel. I'm a big fan of Universal Monsters and 70's paperbacks, so this like Robert Lory's Dracula series is like just tailor made for me. They exists in the right pocket of thrills and chills for me, not out-and-out horror tales, but a gothic-type horror but with adventure mixed in. It's a monster-kid book, pure and simply, like I can picture the characters in "The Monster Squad" having these on their bookshelf back home when they are off kicking Wolfman in the nards.
Dr. Burt Winslow thinks that Dr. Frankenstein really did make the monster and that Shelly's novels is actually fact. So, being a pure-paperback hero with a bank account full of spendable cash he takes off across the globe to Ingolstadt, Germany to buy the Castle of Frankenstein and then brave the frozen tundra to find the big 'ol Frankenstein-ice-cube to haul him back to revive him, tackling Inuit's who believe the frozen Frankie is a god. After a short trip Burt and his love interest Lynn are in the castle with Frankie and the villagers in town are about to boil over with torch-carrying fury. Plus a traveling mesmerist baddie named Dartani and his ghoulish muscle Gort are in the mix. Like a lot of dudes who mess with monsters, Burt immediately regrets his decision what with Frankenstein going on his customary rampage right after waking from his slumber. It all comes to an enjoyable head at the end, with fun action and nods to the classic story.

Glut certainly knows what a monster-fan wants and fully delivers. The book suffers from some "early writing" by an author, it doesn't detract enough to ruin it. Mostly in the form of easy plot convenience and some shallow character stuff. But it swiftly moves along like a real fun B-Movie with a big budget. The originals releases are by the British publisher Mews and aren't the easiest to get. Mine came from all over the world, but the covers were just too damned gruesomely pretty for me to resist. Luckily, Pulp 2.0 has recently republished the whole series, plus the continuations that Glut had written over the years into two big omnibuses that looks great, I'll have to pick them up and Glut's Brother Blood, a Blacula-inspired novel that looks too cool for school.

Posted by bloodyspicybooks at 10:36 AM