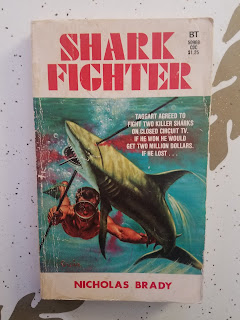 The art of the cash-in book or movie is something that always peaks my interest. "Jaws" was a massive success in 1975, it caused a tidal wave (nice little pun there) of imitators, some of them quite good, others very bad. But who am I to judge? I like Jaws 4: The Revenge. But I LOVE "Shark Fighter" by Len Levinson. I rarely read a book twice, but I did just that to write this review. I shit you not, I bought my copy of the pretty hard to find original paperback at a truck stop that sells used books to truckers. I've found some good stuff there, I guess truckers really like the blood 'n' guts like me. I read it in like one siting and enjoyed the hell out of it. So, the other day I just sort of pulled it off the shelf to take a gander at it and found myself reading it all over again.

"Shark Fighter" star Sam Taggart former frogman for the Navy and present shark hunter and professional beach bum. He's a chain-smoking sex machine who can't help himself and always puts his head in the lion's mouth. He'll piss off anyone, the cops of the small island he calls home, his various lady friends, he's friends with pimps, prostitutes and will do just about anything for a buck including diving for sunken drugs for gangsters. You know, a good guy. His mainline is hunting sharks for meat for the fancy hotels on the island to sever to their guests. It's a living, keeping him in pot, booze and keeping his boat afloat. Things all change for him when he gets hired to fight two sharks on TV for a two million bucks and also falls in love.

This is a loose-structured novel, the first half is just hanging out with Sam on his various hard-boiled escapades, bouncing from danger to sex to boozing and smoking and back again. Normally this might make me loose interest in a novel, but Levinson is very good at making you wonder what will happen next in a rollicking bar-room stale sort of way. Even when the little mini-episodes of the novel seemingly finish Sam's dropped quickly into another jam. Levinson also gives all the side characters enough little quirks and personality to quickly establish exactly what kind of people they are, knowing how pleasantly evil the cops on the island are builds up a nice sense of danger for Sam, they might kill him or skin him or drop an anvil on his head at anytime. The sex is spicy and the action shows Levinson's work under Peter McCurtin at Belemont writing Sharpshooters and Marksman's and the like. This is really what a pulp-paperback is all about, sure things don't always hang together nicely and some characters that seem important just drop from the narrative without much thought, but isn't that life?

Posted by bloodyspicybooks at 1:30 PM