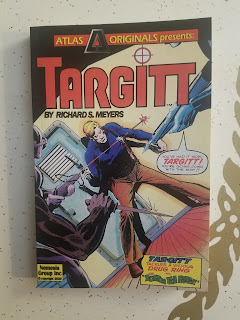 A while back after I could get out of the house during this whole pandemic I beelined to my favorite bookstore and loaded my arms up. Not that I was starving for reading material; I'm certain I will die under an avalanche of cool and unread paperback novels. But It was nice to freshen up the overstuffed shelves. Besides the books, I indulged myself in some of the kinds with pictures, getting my hands on some "Sable, Freelance," 'Power Man and Iron Fist," and accidentally completing the Atlas/Seaboard Targit series with issue #1 from the 70's. It wasn't hard (there's three issues, like a lot of Atlas comics) but it was a happy accident. Low and behold a couple days later a targeted (get it?) ad on Facebook led me to find out that there was a new series of novels based on the Atlas comics. The first one was "Targitt," life is funny sometimes. So, I immediately got on Amazon and a few Prime days later I had the book in my hand and it promptly got lost in the shuffle. But I didn't stay lost for too long which is a small miracle for me.

Richard S. Meyer wrote the first issue of the original "Targitt" comic, he may have wrote the last two but I don't remember and my comic long boxes are inaccessible after my move. The first issue of the comic sets up a familiar "mob-busting" plot line, much like "The Executioner," "The Punisher," "The Sharpshooter/Marksman," etc. etc. Badass guy's family is collateral damage in a mob killing and they go after them with vengeance on the brain. It's a nice full circle that Ric Meyers did the novel. He's an old pro at the Men's Adventure novel and it's a welcome return. His runs on "Dirty Harry," "Ninja Master," and "Mac Wingate" prove to be some of my favorites from those series. He's got a fun cinematic style of writing that makes everything feel like a solid little B-Actioner.

"Targitt" is a lot of fun in general. Luckily Targitt himself doesn't wallow in the death of his wife and child too long and just starts busting heads. He's a fairly standard kind of hero for this type of story, Vietnam Vet, working for the FBI to bust the mob, that is before he goes revengin.' With the help of his resident "Q" Hunch he gets a bullet-proof suit and a special .357 called...wait for it...The Targitt Special. Noice. With the help of a female FBI agent with a secret and his dad's old buddy from the Korean war. There's super-human drug addicts that are seemingly unstoppable, old Nazi doctors, dangerous mobsters and by-the-book FBI men. It's a bucketful of over-the-top entertainment, hopefully Meyers can write a bunch more. If you're looking for anything "realistic" you may want to look else where but if you'd like to read the comic book version of a Men's Adventure novel pick it up because it's the novel version of a comic book take on the Men's Adventure novel. My wires might have got crossed in that, but anyway it I wholly recommend it.

Posted by bloodyspicybooks at 8:09 AM