I've been a book slump; what I pick off the shelves just hasn't been hitting me right or maybe the outside world is just keeping too much of my attention. Whenever I get like this I turn to short stories and novellas, punchier works that don't take anytime to devour usually screws my head on straight. When this strikes, I turn to my digest and anthology shelf. I'm a big fan of digests, but they can be a headache to collect, their scarcity and higher prices has made my collection modest, though I buy them whenever I can. I keep dreaming of the find of a full big box of Mike Shayne's, Hitchcock's and Ellery Queen's but it hasn't happened yet, dammit.  Anyway, here's a smattering of short reviews for short works.

"Seven from INTREX" by Michael Avallone in The Saint Mystery Magazine, September 1966 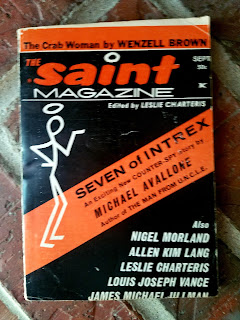 Michael Avallone is one of favorite authors and it had been a while since I dipped into his work. The David Seven series (four stories) all appeared in The Saint Mystery magazine over the course of 2 years. Seven (cool name) is an agent for a independent crime-fighting agency funded by rich people (if only) to work toward Peace, man.

David Seven himself is a fairly standard secret agent-type, not surprising that Avallone wrote the first Nick Carter, Killmaster AND the first Man from U.N.C.L.E. tie-in novel. This is very much his own version the super-agent. Knowing Avallone's love of the pulps, it wouldn't surprise me if Operator 5 or Secret Agent X helped in the process. Seven's partner Miles Running Bear Farmer, who gets himself in trouble in this story and Seven has to work to get him out. It's a whole lot of fun, short and too the point with all the nice comforting 60's spy-fi tropes that make me feel all warm and fuzzy on the inside. I would have loved it if Avallone wrote expanded Seven's world to novel, but it seems like he was busy enough at the time. Though if David Avallone ever reads this, I'd be first in line with a handful of money for a collection of Michael Avallone's short works. 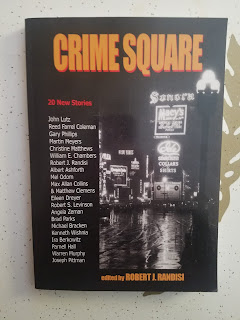 I've long been a fan of Gary Phillips, his Ivan Monk mysteries are some of the most unsung private eye novels of the 90's. Plus his stand-alone novel "The Perpetrators" is a stone-cold action novel classic, one of the most high-octane books I've ever read and one of the few I've read more then once. This story is set in the early 80's and stars Pete Atlas, a Men's Adventure private eye who's just plain cool. Not to mention that it name-drops Angela Harpe, star of the "Dark Angel" series by James Lawrence! (Which got me to spend WAY too much to pick up a entry in the series, god, I'm a sucker)

"A Fox on Broadway" is a hoot! Man, it doesn't seem like Phillips ever revisited the Atlas character and that's a bummer. It reads like a super-condensed paperback novel in one of the "Sweats." The opening grabs you (there's a hat-wearing man in a gorilla suit chasing a naked woman down the street) and then throws you on a wild, tight little escaped involving brain-washing and damned 'ol Nazis. The only problem is that its short, I could have read a lot more about Atlas and his adventures. 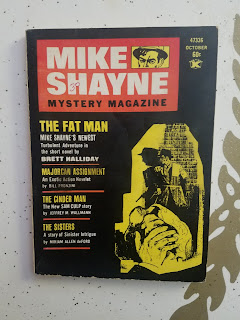 "The Majorcan Assignment" by Bill Pronzini and "The Cinder Man" by Jeffery Wallermann in Mike Shayne Mystery Magazine, October, 1972

It took me a while to realize that I was reading a "Nameless" detective story from Bill Pronzini, it dawned on me about the time I thought, "gee, did I miss this guys name?" then I felt dumb. I've read a big chunk of the Nameless series in my teens (I was that cool) and always enjoyed them, especially the early ones and the ones centered around pulp magazines. He's a little more hard-boiled in this early story then I remembered him, but it's been a while since I read one of the novels.

"The Majorcan Assignment," finds Nameless in Majorca to deliver some hurried cash to a rich man's son, he's looking at it like a nice vacation, but once there and after a smack in the face he knows trouble is brewing. This is a nice, clean and to-the-point private eye tale with a little more heart then you average tough-guy tale. I'm going to have to dig out one of the novels to read, as it's been too long since me and Nameless hung out.

Jeffrey M. Wallamann wrote with Bill Pronzini some so it was only fitting that I check out his tale, "The Cinder Man," starring insurance investigator Sam Culp. I had read another Culp story in the "Pure Pulp" anthology and enjoyed it. It's a bit by-the-numbers but Culp's a likeable character and it built to some nice tension. I must have liked it well enough because it got me to order Wallermann's novel "The Spiral Web." 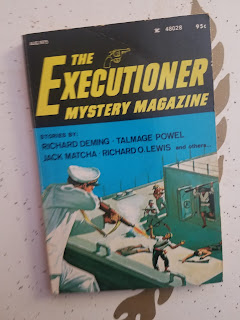 The Executioner Mystery Magazine was a short-venture, it probably didn't get a lot of traction because unlike other "stars" of mystery magazines, like Shell Scott, Mike Shayne or The Man from U.N.C.L.E. there is no novella staring Mack Bolan in the magazine, he just lent his nickname to the title. But there's good stuff in them, old stalwarts like Talmage Powell , Gil Brewer, and Richard Demming had stories in them, so you know it's got class.

Stephen Mertz has written a lot of books, including "Some Die Hard," which I reviewed a while ago. He's a fantastic old-school writer of tough-guy fiction who's work is clean, professional and most importantly very entertaining. "The Busy Corpse" is his first published work and it already showed that he was guy who had the goods. It's a clever and fun private eye story and maybe the secret inspiration for "Weekend and Bernie's." I need to pull his newer series about Kilroy, the 70's set Denver P.I. who's already had a few adventures, off the shelf and give the rest of them a spin and review them. "The Busy Corpse" is also easily available in "The King of Horror and Other Stories," a collection of Mertz's short work.


"A Trip to the Islands" by Edward Y. Breese in Mike Shayne Mystery Magazine February 1971 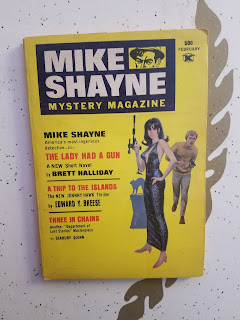 This issue of Mike Shayne Mystery Magazine not only has one of favorite characters from MSMM Johnny Hawk, but it also as a Jules de Grandin reprint and the Mike Shayne story was a ghost-work by noted sci-fi and Lovecraftian author Frank Belknap Long, so it's got a lot going for it. But I'm in for the Johnny Hawk tale, so:

Johnny Hawk is a super-hard boiled trouble-shooter with a cut-down .45 Colt New Service and a penchant for getting into and out of jams. Hawk got a lot going for him, he's suitably tough and without a strict background his stories can be mysteries in the private eye mold or more of the secret agent type tale. He would have made a great paperback hero, but Breese kept busy ghost-writing Mike Shayne tales for MSMM and selling stories to other digest. "A Trip to the Islands," is a nice south of the border type adventure with dangerous dames and bad-baddies. I'm on a mission to collect all the Johnny Hawk tales.

Posted by bloodyspicybooks at 7:57 AM