Private I by Jimmy Sangster 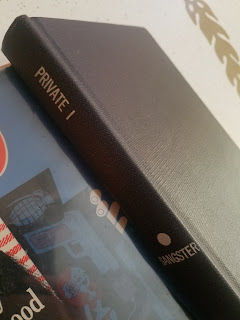 Being a movie-guy I've long been a fan of the screenwriter Jimmy Sangster who not only wrote a lot of the best Hammer Horror films, he wrote one of my absolute favorite 60's Bond cash-in movies "Deadlier Than the Male." The classic British clubland adventurer Bulldog Drummond was dusted off for the 60's in that film and Sangster's supremely clever and cool script combined with slick production and Richard Johnson's 2nd-only-to-Connery-cool-guy makes the film a treasure.  Between film scripts Sangster found time to produce some novels, some of them are adaptations of his screenplays, others are wholly his invention. He did a swinging spy-caper type in the two novels that comprise the "Touchfeather" series, starring a stewardess turned secret agent.

And then he did the John Smith double-series, starting with "Private I," which is a more downbeat espionage tale in the Len Deighton mold. Deighton is often overlooked for John le Carre when it comes their influence over the genre. The "Harry Palmer" novels had big influence on a lot of writers who wanted some of the Bond money, but just couldn't do the "spy-fi" thing and wanted to do something grounded. After Len a lot of books about broke, grubby, disobedient secret agents popped up. John Smith is in this mold, but Sangster puts a little American private eye into the soup and lets it boil. It seems like a personal book, whether its just me projecting or not, I think a lot of Sangster is John Smith, the little habits and personal observations.  It's a confident voice that compels you to turn pages. 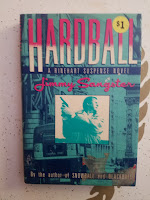 So, "Private I" has a cracking good narrative voice, does it have a clever plot to match up with? Yes, yes it does. John Smith is a former spy for the British government now working in the broke-private eye business. He's a unkempt, pudgy kind of man who's not above a dirty dollar who barely has his head above water at the start of the story and quickly sinks. His ex-wife wants pictures of her new government official husband in a compromising position with another man. This is the tip of the iceberg that involves the Chinese spying on the Americans, coded notebooks, the British wanting in on it, murder, blackmail, economy travel, Smith getting a nice new top coat, women, threats and gun fights. Smith is a guy who makes a lot of mistakes, but its stupid or weak; he simply has taken a knife to a gun fight and has to out-smart his opponents.  He'd be a lively guy to have a pint with, so reading about him was a pleasure. 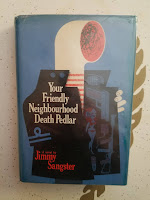 It's a sublime story of a dirty cat-and-mouse game. It's currently very easily picked up in both print, ebook and audio from the stellar publisher Brash Books. Do yourself a favor and give it a try.  Also Sangster's later series about ex-Scotland Yard copper James Reed are novels worth reading, basically I'm saying is it says Jimmy Sangster on the cover you're in for a good time.

SIDE-NOTE: My copy of "Private I" is a former library book, I usually shy away from ex-library book because of usually being hardbacks and in poor-shape. BUT before I went full-book-crazy I got most of my reading from the library. I got waves of nostalgia holding this re-bond old book. I went through most of my readings Donald Westlake (and Richard Stark) Mickey Spillane, and countless others with these plain covered books that were coffee stained (and god knows what else) and shabby, but shaped my reading love. I guess you can come home again.

Posted by bloodyspicybooks at 7:47 AM