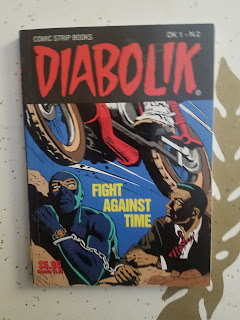 Diabolik is a world wide phenomenon...except for America, where if he's known at all it's for the awesome Mario Bava film, which is where I was first introduced to the utterly cool Diabolik and Eva Kant. Diabolik was created in 1962 by two sisters, Angela and Luciana Giussani in digest-size comics. Diabolik himself is a total anti-hero, a near ruthless criminal only out for the loot, pulling off daring heists and staying one step ahead of the law in a skin-tight back body suit and only his knives to protect him. A lot of source cite him as some sort of Italian Batman, but I don't buy it. Maybe in popularity, but other then a dark costume and cool gadgets there's not much in common. Diabolik is much cooler too.

There hasn't been many English translations, a couple in the 80's from Pacific comic and six in the early 2000's by Scorpion comics. I have two of the Scorpion releases and wish I had hundreds more English translations to dive into, but alas life isn't fair. There are some original Italian issues on my shelves and I can get the gist of them from the artwork, but it's not quite as satisfying. The Scorpion comics are newer story's, probably fairly recent from when they were published, I would love to get my hands on the early issues where Diabolik is even nastier. With the waves of European comics making their way to the U.S. it boggles my mind why this and the also fantastic Dylan Dog and Martin Mystery comics haven't had a least more issue's translated. 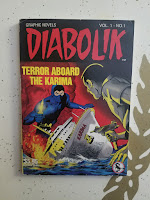 In this issue, Inspector Ginko who's Diabolik's chief antagonist has his girlfriend kidnapped for revenge and it ties into a diamond heist Diabolik was on.  It's a comic issue, so there's not a mountain of story, Diabolik and Ginko work together in a tight spot, Eva Kant does a daring scuba rescue, there's baddies out for revenge and Diabolik's customary disguises and of course Diabolik gets away with it. It's all done professionally and cleanly, but I did prefer the other issue "Terror Aboard the Kamima," which was a lot more thrilling. Diabolik doesn't even wear his costume in this tale and kinda of takes a backseat to Ginko.

I'm a fan of Diabolik. Comics like this make me pine for a more and more. I was a big comic reader when I was a kid and teen but I'm fairly bored with superheroes and the like, it's nice an refreshing to have a nice crime tale but still told in the slightly fantastic comic-book-y way. I don't think Diabolik is for the majority of American comic readers though, they seem to like their men in tights to be a bit more grandiose and heroic. I'll take a couple of knives and a black suit any day. 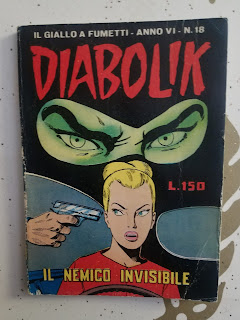 Posted by bloodyspicybooks at 1:03 PM