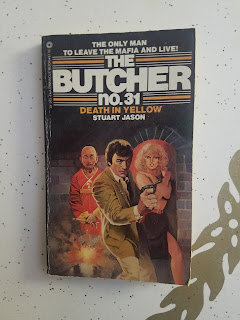 Throughout the 31st volume of The Butcher phrases and names stick out, Fu Manchu, Tarzan, Shiwan Khan, "The Master of Men," this is Avallone wearing his pulp-love on his sleeve and acknowledging what kind of novel he's writing. Michael Avallone is one of my favorite writers, if not my favorite. His Ed Noon books spanning thirty-years is a towering work, an ever-evolving take on the generic private-eye tropes told in a incredibly unique, funny, thrilling and snappy manner. It's something few writers could have done, write that much about one dude and never make it stale. He was a one-of-a-kind writer.

Avallone took over The Butcher series with number 27 and wrote all of the remaining books in the series. James Dockery wrote most of the rest of them and I've never made it through one of his entries. The inception of the series is interesting because it was originally offered to that utterly badass writer Ennis Willie to continue his Sand series. He didn't want to do it and passed it off to Dockery who made a very pale copy of Sand and left out all the tight-writing and excitement of Willie's writing. It's my recommendation to only bother with the Avallone Butchers but also buy Ennis Willie's Sand books too and cry to know that there could have been more Sand in the world. Basically Butcher is "the only man to walk out on the mob," who has a price on his head but now works for the government. He likes ladies, blasting baddies and his silenced Walther P-38, that's about all you need to know.

"Death in Yellow" is a yellow-peril book, a spin on Sax Rohmer's Fu Manchu novels and the decedents of Fu Manchu. Those sensitive to racial issues might have a problem with it, but "Death in Yellow" is no where as bad as a actual Fu Manchu in terms of being VERY racist, the novels villain just happens to be Vietnamese who acts Chinese and enjoys the "evil mastermind" stereotypes. Avallone is playing in a sub-genre that could easily make a reader feel uncomfortable. I can read and enjoy things and look past the out-dated prejudices, though I do understand and acknowledge that parts of certain novels are problematic but not everyone can and that's okay. There's plenty of books in the world.

But this a corker of a book, straight-to-the-point and pedal down. Butcher barely has time to breath as he is assigned by "White Hat" a super-spy organization to go to Florida to check in on a super-gas that can kill swaths of people. As per usual with the series, it opens with a mafia hit-man trying to collect he price on Butcher's head and spoiler, failing. Then he gets wrapped up with Gorgeous Jean and he muscle-bound morons, gets laid, is attacked by rabid rats, gassed, knocked out, and trapped in Lo Te Tsang's Spanish Ruins complex of death in the Florida swamp to save a scientist and get some revenge then there's some more double-crosses and picking up pretty waitresses. It's a busy coupla days for Butcher.

This is pretty much what I look for in a Men's Adventure book, lots of adventure, ladies, comforting action tropes and a slight tongue-in-cheek approach. Avallone has a fun, loose way of telling an adventure story, you strap yourself down, let it roll and you'll have a good time.

Posted by bloodyspicybooks at 8:59 AM