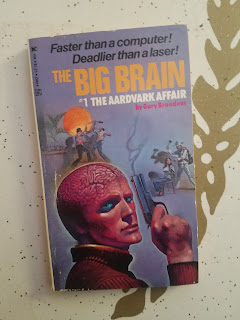 The Big Brain books are mostly known for their eye-popping (or brain-popping) covers than anything. Here's the deal, it's a bit of false advertising, "Big Brain" or Colin Garrett doesn't have a translucent skull where you can see his big 'ol brain, no apparently he looks pretty normal. Gary Brandner is best known as the author of "The Howling," which is like the best werewolf movie ever (sorry American Werewolf) but he had a long career, post-Howling mostly writing thick horror novels. Though he also appeared pretty regularly in the mystery digests of the 70's and 80's, having a few good private eye characters like D. Stonbreaker and Dukane. He clearly had a affinity for the mystery/thriller genre.

And there's the rub, the Big Brain books are mystery/thrillers for the most part, not crazy pulp science fiction as they appear. It was probably the reason the series didn't last longer. Mystery fans might have liked it but were turned off by the sci-fi covers and vise-versa. The whole set-up seems like a bit of cash-in on "The Six Million Dollar Man" with some Doc Savage thrown in for good measure. Colin had be raised from birth to be a mental giant who gets roped into working for a secret government agency as a trouble-shooter. It had TV-Pilot-Movie potential written all over it. I can see big Kenner action figures where you could pop the top off of Colin's head to see his gooey big brain.

The novel operates a espionage mystery, scientists on the hush-hush Advark program are suddenly reduced to drooling, babbling nincompoops. Big Brain is pulled away from his lady-friend and whisked away to solve the problem. Colin's a likeable-character who dispite his vast knowledge is still an amateur in the spy game, he can't really shoot or fight. Maybe he'll memorize a karate pamphlet in one of the next adventures, but it's a pleasant change from some Men's Adventure heroes who are pretty perfect. There's Russian spies, home-grown mad-men, double-crosses, luscious women, getting hit on the back of the head, and LAZERS. It's fun for the whole family.It worked for me, I can see how it wouldn't work for everyone, but it's a nice set-up for a series as Garret can't seem to get the taste of cloak and daggers out of hi mouth by the final chapter. I'm glad I have the rest of the series to see where it goes, word on the street (internet) is that the final book "Energy Zero" is the best, but sadly it has the worst cover. Kinda fitting.

Posted by bloodyspicybooks at 11:33 AM