Hitman #2: They Me Kill You, Sweetheart by Kirby (Kin Platt) Carr 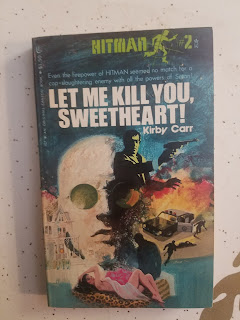 Kin Platt was an interesting individual, a cartoonist and writer who produced work in a most mediums, comic books, YA novels, advertising, kids books, radio, film, adult novels, "adult" novels (wink) and TV. Most of the work I've read by him has a definite satirical bend to it. He's most well known for his children's novels, which tackled a lot of "mature" topics for kid's books, divorce, drugs, mental issues and such. He also wrote a pretty fun adult mystery series about Max Roper. While looking into Platt I stumbled upon his YA novel "The Blue Man," and had a long-forgotten memory of the book nudged out into the open in my brain. I think I read it many years ago, I'll have to track it down (cause I need more books?) to double check.

But his entry into the world of Men's Adventure fiction is what I'm talking about today (or whenever you read this) and that is Mike Ross a.k.a. The Hitman who packs heat and dresses in all black complete with cowl with "slit eye openings" to hunt down criminals. It's a series that's on one hand very much in the Pulp Hero mold, he operates very much like The Spider or The Shadow and on the other owing to Platt's comic book history. It's a world where spooky things, (vampires, witches etc. etc.) can exist? Maybe? Sometimes they seem to and it comes out of nowhere and then some are "Scooby-Doo" villains who get their rubber mask pulled off. It's probably owes more to the "one draft" novel approach of some of these lower-class publishers then a straight artistic choice. But who knows, I enjoy them for their seat-of-the-pants-kitchen-sink style. Platt was probably having fun writing them; just letting them pour out.

SIDE- BAR: I often find myself on pdf's of archival material that authors have donated to universities. Their full of little tidbits of information and "lost" work type stuff. You have to get used to how their laid out but it's a interesting rabbit-hole to fall down into. I've done it with Michael Avallone and the Kansas author L.V. Roper. When this Covid-19 loosens it's death-grip on the U.S. (seriously where's The Spider to blast it into submission with his blazin' .45s?) I might make a pilgrimage to Roper's collection which seems to house unpublished novels in his "Renegade Roe" series.  Platt's is at the Howard Gotlieb Archival Research Center and pouring through the stuff in the collection I've found the original titles to some in the series. As follows:

He seems like he might have given up on naming them once we figured out that Canyon Books was going to name them whatever the hell they wanted. But there's a nice little nugget of usless information for you.

Platt does seem to have a firmer grip on what he wants the character and the world to be in the second novel, the first is a bit looser and free-wheelin' but Platt has all his character stuff set it seems and the world built and is now just playing around. His mentor Lo doesn't play much of a part in this episode, but his other secondary characters i.e. his S&W Model 29 .44 Magnum, the Baby Erma .22 Luger, and his "burpgun" have a lot to do. The action comes often and nice a gory, but is over fairly quickly. There's obvious humor scenes and colorful character names which make the books really stand out among the rest of "The Executioner" clones. The plot is convoluted as hell and fantastic. Cops are being killed all over the country and The Hitman wants to stop it. The mob is involved, also a cult, also witches and a home-grown terrorist outfit. The final big-bad reveal is a bit of a stretch is wrapped up so quickly Platt must have know he was close to his word count. There's a lot of goofy stuff that will turn people off, odd scenes and asides about occult matters that really don't go anywhere. But if you in the right mind-set its a helluva ride.

The books are too hard to get and pricey to boot, it'd be a fun series to see reprinted but I don't know if it'll happen. Platt's Max Roper books are available as ebooks so that's something. If you dig 30's-40's pulp heroes or their modern counterparts it's fun to see what the forefathers of the pulp-revival were doing in the 70s. Watch out on the blog for more Hitman reviews and even a review of "The Impossible Spy" by Kirby Carr, the only non-Hitman book Platt did as Carr which promises psychic spies.

Posted by bloodyspicybooks at 8:10 AM